SNP remains in a strong position as general election enters final week, but Labour could still benefit from tactical voting

As the general election campaign enters its final week, Ipsos MIORI’s new poll for STV News continues to show that the SNP is in a dominant position. 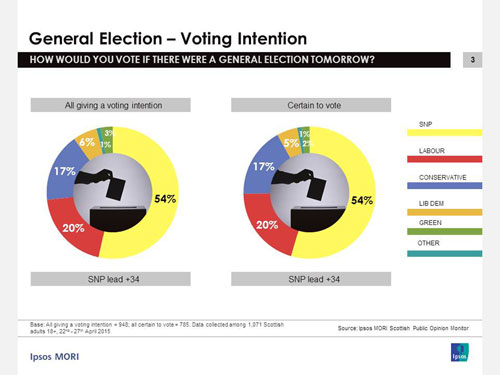 While the poll represents further good news for the SNP ahead of the election, a close look at the data suggests caution in assuming that voters’ views are settled. Firstly, 22% of those who express a firm preference on our first voting question, report that they may change their minds about who to vote for before polling day, ranging from just 14% of those who intend to vote for the SNP, to 63% of those who currently back the Scottish Liberal Democrats.

Second, there are some signs that, if any tactical voting takes place, it may be most beneficial to Labour and the Liberal Democrats. While only 14% of respondents said that Labour are their ‘preferred party’, a further 30% report that they may vote for Labour if they thought they had a chance of winning in their constituency, including 35% of Conservative supporters and 34% of Liberal Democrats. The equivalent figure for the Liberal Democrats is 25% compared to 17% for the SNP and 15% for the Conservatives.

The majority of Scots also think that, if the SNP has some influence in the UK government after the election, then that would be a ‘good thing’ for Scotland (69%) and for the UK as a whole (60%). Unsurprisingly, SNP supporters are most positive about potential SNP influence, but the balance of opinion among Labour and Liberal Democrat voters is also favourable in terms of the impact on Scotland; 47% of Labour supporters think it would be a ‘good thing’ for Scotland, compared to 43% who think it would be ‘a bad thing’ and equivalent figures for Liberal Democrat supporters are 49% and 42%. 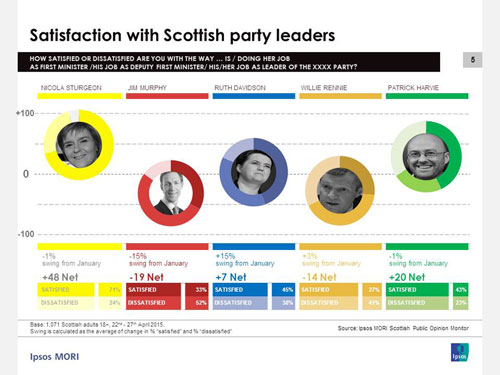 "We are now in the final week of campaigning ahead of the crucial election and the SNP is clearly consolidating its dominant position among voters in Scotland. While the numbers of seats each party will win next week remains unclear, it is likely that the SNP will make significant gains. For Labour, while support has fallen since our last poll in January, they will hope that those who remain undecided and those who are prepared to vote tactically, will back them and help to minimise the loss of seats. Reinforcing their position of strength, Nicola Sturgeon remains the most popular political leader in Scotland with 71% satisfied with her performance. The poll also confirms the growing popularity of Conservative leader Ruth Davidson, who attracts a satisfaction rating of 45%, far outstripping support for her party."