A new Ipsos poll for the Evening Standard shows that Britons prefer Boris Johnson to Keir Starmer to lead the rest of Britain’s COVID-19 pandemic response and the subsequent economic recovery. Key findings in detail (changes from December unless otherwise stated): 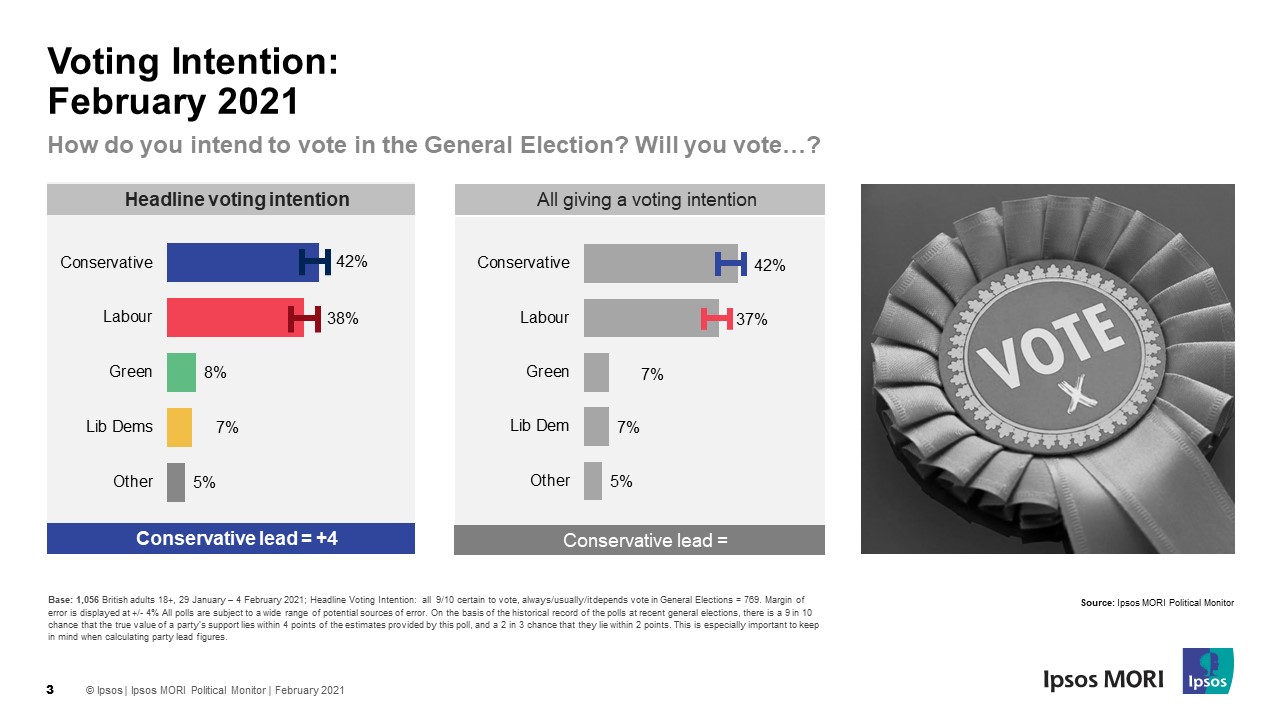 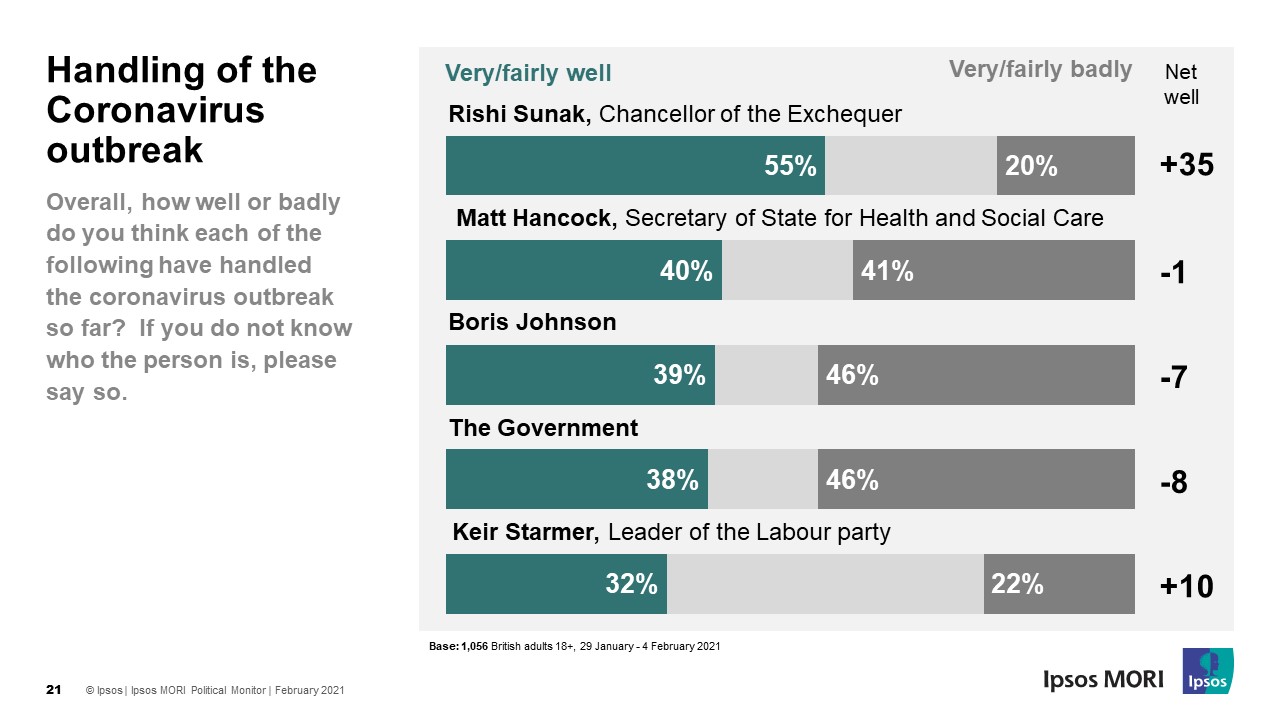 Some 44% of the public think Boris Johnson would respond better to the pandemic from now until the end of the crisis, compared with 27% who think Keir Starmer would do better. Asked who would be better at managing Britain’s recovery after the pandemic, 29% picked Keir Starmer, 44% Boris Johnson.

39% of Britons say they know ‘a great deal’ or ‘a fair amount’ about Keir Starmer. This compares with 85% for Prime Minister Boris Johnson and 65% for former Labour leader Jeremy Corbyn.

Keir Starmer is described as decisive by 46% and indecisive by 28%. 39% believe Starmer is someone who ‘leads opinion’ but 34% say he follows it. 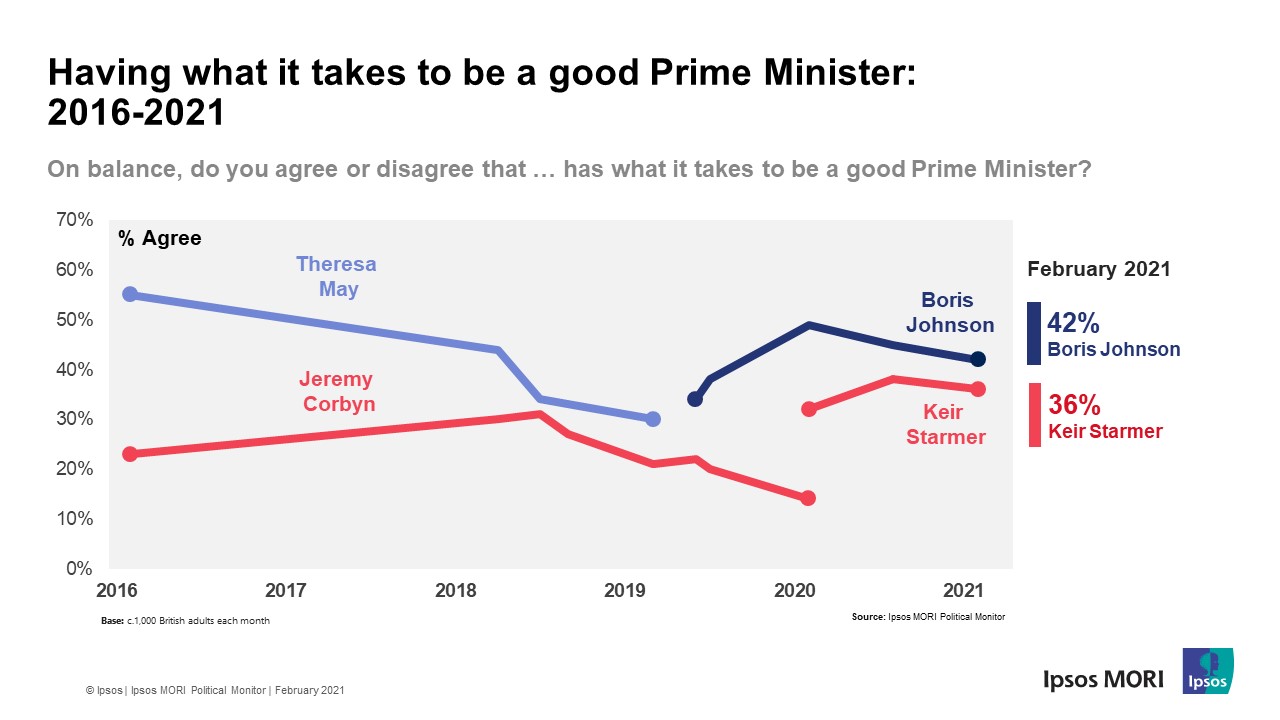 Is Labour ready for government?

Labour is behind the Conservatives for having the “best team of leaders to deal with the country’s problems” by 41% to 21%. Only 16% think they are the most “clear and united” party, compared with 32% for the Conservatives. A third (32%) believe Labour is ready to form the next government, which is up from 29% in August. 43% do not believe Labour is ready, though this is less than the 59% who disagreed in November 2019 – before the last General Election.

The British are among the most likely in the world to say they would get a vaccine, and our poll shows that is backed up by strong public approval for the government’s vaccine programme (and which also seems to be boosting Matt Hancock’s ratings too). This is adding to Keir Starmer’s challenges, who is yet to convince voters of his vision for the country post-pandemic. The public are still to make up their mind about him (he is even now less well-known than Jeremy Corbyn), although he is broadly seen as changing Labour for the better, and he’s not attracting the negativity of his predecessors (his personal ratings remain net positive). But it’s not just about the leader – the public still have questions about the party itself and whether it is ready for government. Although these are showing signs of slow improvement, there is still a long way to go before they match election-winning Oppositions

Ipsos interviewed a representative sample of 1,056 adults aged 18+ across Great Britain. Interviews were conducted by telephone 29th Jan – 4th Feb, 2021 Data are weighted to the profile of the population. All polls are subject to a wide range of potential sources of error.