Support remains strong for the junior doctors, and the government seen to be most at fault for the ongoing dispute

Two thirds still support the doctors’ cause, as round two of strikes gets underway

Public support for the second round of the junior doctors’ strike is as high as it was for the first strikes in January, new polling from Ipsos has found. The survey of 847 adults in England finds the same proportion (66%) supporting junior doctors striking as for the previous strike in January. Furthermore this support has strengthened, with a eight percentage point rise in the proportion strongly supporting the doctors in the dispute (from 41% in January to 49% now). 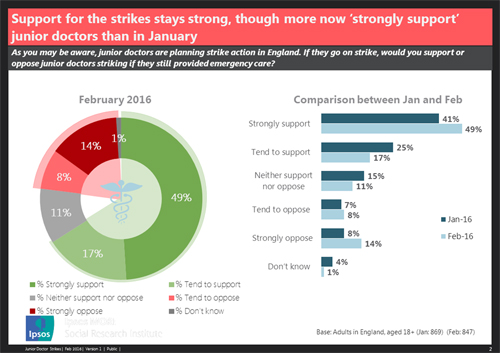 Despite this sustained support, there has been a slight rise in those opposing the strike, from 16% in January to 22% now. Opinions have polarised here as well with more strongly opposing the strikes now than for the previous strike (8% up to 14% in February).

Junior doctors are planning their second strike tomorrow, and Ipsos’s second wave of figures shows that the government is bearing a lot of the blame for this ongoing dispute.

Two-thirds (64%) say that the government is more at fault for the dispute continuing this long, while just 13% say the junior doctors are more at fault. Nearly a fifth (18%) believe that they are both equally at fault. 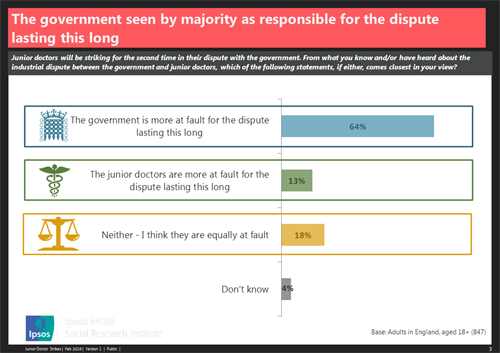 Commenting on the findings, Anna Quigley, Head of Health Research at Ipsos, said:

“These figures show that the ongoing nature of the junior doctors’ dispute is harming the government more than the doctors. We know that doctors are among the most trusted individuals in society, and this dispute appears to have done little to dent this trust. Despite this, the junior doctors need to avoid ramping up the confrontation – the small rise in those opposing the strikes since January is marginal, but combined with our January finding of support falling if emergency care is withdrawn, it demonstrates that the doctors need to be careful not to jeopardise the public’s good will.”