With less than a week to go until the next Autumn Statement new Ipsos polling shows growing public concern about the government’s plans for public services. Our latest Political Monitor shows two in three (67%) Britons disagree the government’s policies will improve the state of Britain’s public services, up from 60% before the election and at its highest level since 2001. 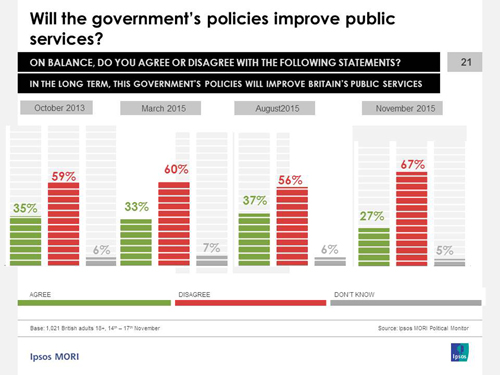 When it comes to the specific areas targeted by spending cuts one in three (33%) Britons think the Government is making the right decisions on where they should be made, while three in five think they’re making the wrong decisions (59%, up from 38% in October 2010).

When asked what areas should be subjected to spending cuts if more are needed six in ten (59%) Britons mention overseas aid. This is followed by benefit payments (mentioned by 36%), defence (19%) and transport (15%). When asked which areas should be protected from spending cuts the NHS proves most popular, cited by three in four (73%). Schools were the second most mentioned area to be protected (39%) followed by care for the elderly (28%), defence (27%) and the police (23%). 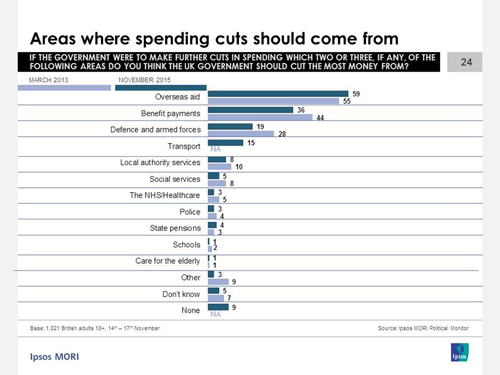 As the public wait to hear the outcome of the Spending Review there’s no sign they’re becoming more optimistic about the economy. Three in ten (31%) think the economy will improve over the next 12 months (down 1 point from October) while two in five (40%) think it will get worse (up 2 points), giving an Ipsos Economic Optimism Index of -9. However the government’s long-term economic plans are still viewed more favourably than its policies for public services. Just under half (48%) think they will improve the economy (down from 53% in March) versus 47% who don’t think they won’t (up from 39%). 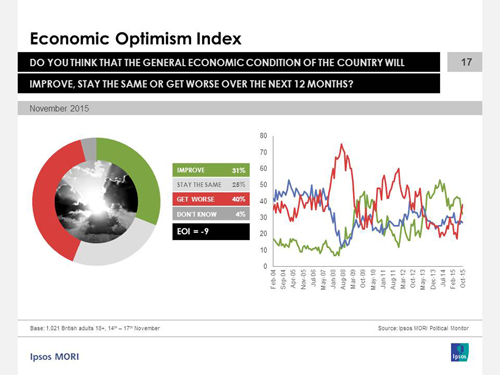 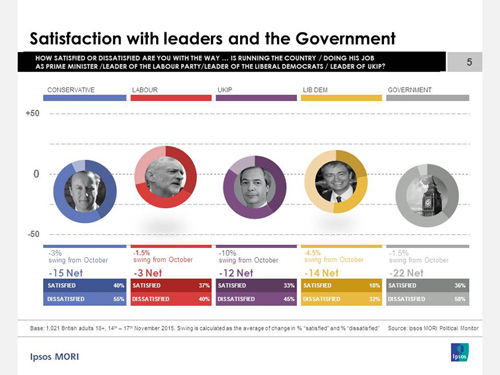 The Conservatives maintain a clear lead in voting intentions, similar to their General Election performance. Conservative support stands at 41% this month, with Labour on 34%, Liberal Democrats on 7%, UKIP on 7% and Greens on 4%. 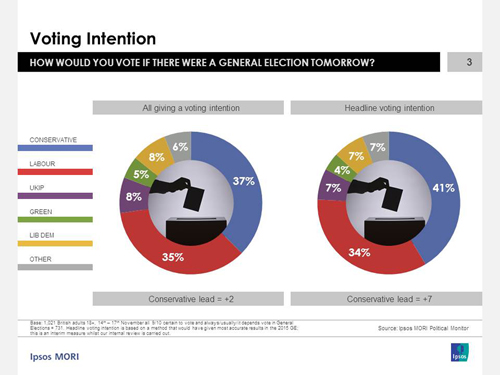 “The Conservatives still command the political landscape, but they have a trickier run-up to the Spending Review than for the summer’s Budget, with growing public anxiety about the impact of their decisions on public services. In particular, Britons want to protect the NHS, the apple of their eye, at a time when health bosses are warning of the financial risks facing our healthcare system.”

Ipsos interviewed a representative sample of 1,021 adults aged 18+ across Great Britain. Interviews were conducted by telephone 14-17 November 2015. Data are weighted to match the profile of the population.