Economic optimism was strong among Captains this summer

When interviewed between May and August this year, 8 in 10 (79%) Captains of Industry expected the economic condition of the country to improve over the next 12 months, making them more optimistic than when this question was first asked in 1987 (69%). 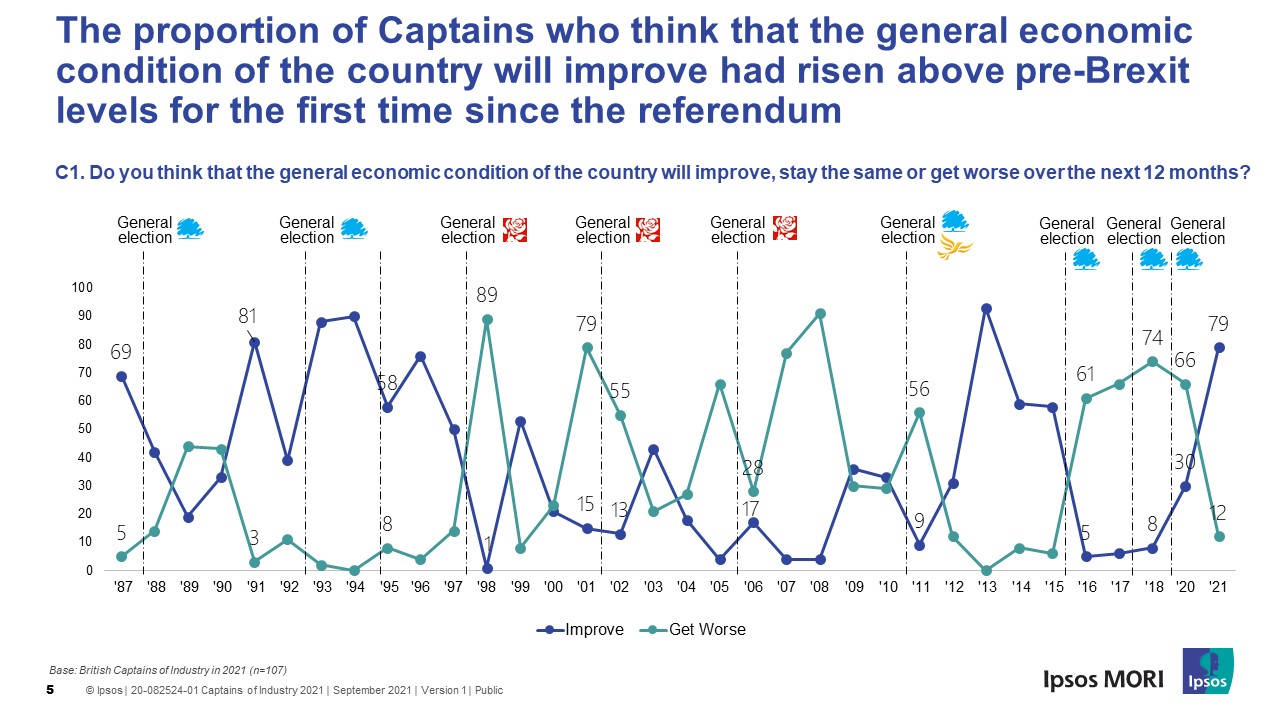 When thinking about their own companies, 81% of Captains expected business to improve over the next 12 months, up from 42% in 2020 and level with views in 1987(80%) when this question was first asked. 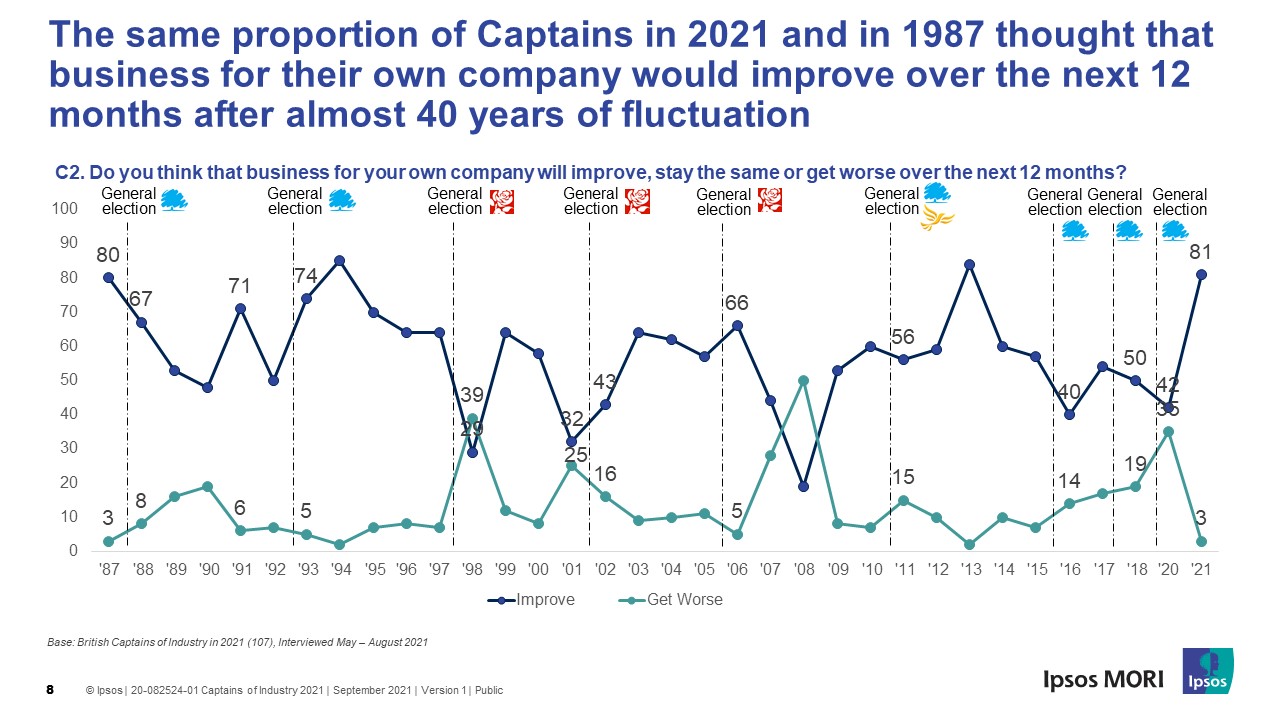 Over the past 40 years, Captains have generally been more optimistic about business for their own company than the general economic condition of the country. An average of almost 6 in 10 (58%) of Captains since 1987 have thought business for their own company would improve in the following 12 months compared to 38% who said the same for Britain. It is unusual for optimism to be so high for both but these numbers should be set in the context of the pandemic, where business leaders are likely to see things as improving from a low base.

Impact of COVID-19 and future challenges

Now, the impact of coronavirus is seen as the most important issue facing Britain (78%). Despite a fall from 86% last year, the pandemic continues to be the key concern for most Captains when asked for spontaneous impressions, followed by Brexit uncertainty, cited by 57% and economic uncertainty (50%).
However, economic uncertainty and maintaining and retaining staff are the top concerns for Captains’ when thinking of their own businesses. Half (51%) named economic uncertainty as a key problem facing their company; while a third worry about maintaining and retaining staff (36%). Similarly, 35% named the impact of coronavirus as a top concern.

Six in 10 Captains (60%) agreed with he statement “In the long term, this Government's policies will improve the state of the British economy”. Just a fifth (21%) disagreed. Four in 10 (41%) Captains have confidence in the UK government’s post-Covid economic recovery strategy while a quarter do not (28%).

Over half of Captains expect the new trading agreements between the UK and the EU to have a bad impact on Britain (56%). Despite this, only a fifth (20%) expect it to negatively affect their own business.
Three-quarters of those surveyed believe the loss of trade with the EU will outweigh gains from new trade deals (75%) while only 15% expect them to be equal and 7% expects new trade to outweigh that from the EU.

Looking beyond 2021, it seems the pandemic will have a lasting impact on the way we work. Seven in 10 (70%) Captains expect the majority of their UK staff to carry out their work split evenly between an office and their home 2-3 years from now. In 2019, when asked how their staff carried out their work, only 4% of Captains said it was split while more than 9 in 10 (93%) said work was carried out mostly/entirely in an office/workplace away from employees’ homes.

When considering the new way of working, split between office and home, improved employee wellbeing/work-life balance is considered a key benefit by 73% of those surveyed while 63% say reduced travel/commuting time is a key bonus. On the other hand, key challenges, according to Captains, include ensuring effective collaboration across and within teams (66%) and maintaining organisational culture/identity (59%).

Looking to the future, 62% of Captains said improving employee wellbeing/work-life balance is a key priority moving forward when it comes to adapting to new ways of working after the pandemic, while 44% will focus on improving collaboration and 41% will prioritise reconfiguring the office space.

This is the 40th anniversary of Ipsos's Captains of Industry study providing unique insights into what the UK’s leading businesspeople think about a whole host of important issues, across the economy, politics, business, diversity and the environment.

What the latest study shows is that while COVID has had a significant impact, businesses are relatively optimistic about the next 12 months, and while it has often been the case across the 40 years of the Captains of Industry study that those interviewed are more optimistic about their own businesses fortunes over the next 12 months than about the general economic outlook, this year bucks the trend with equal optimism across both.

Ipsos interviewed n=107 ‘Captains of Industry’ between 17th May and 2nd August 2021. Interviews were conducted by telephone / video conference. Survey participants are Chairmen, Chief Executive Officers, Managing Directors/Chief Operating Officers, Financial Directors or other executive board directors from the top 500 industrials by turnover; and the top 100 financial companies by capital employed.