The country is at an inflection point.  Over half of Americans believe they will be back to their pre-COVID life within the next six months.

Nearly two in three Americans have received at least one dose of the COVID-19 vaccine. But news source and partisanship remain stubborn drivers of vaccine hesitancy, with significant minorities reporting they will never get a COVID-19 vaccine.

America is working towards normal

Nearly 15-months into the pandemic, Americans are beginning to see the light at the end of the tunnel. Concern about the pandemic is declining. And, for the first time since the Axios tracker began, over half of Americans report going out to eat as social distancing falls.

As much of the country gets the vaccine and looks to reopen, another issue is emerging: the vaccine wall. As of early May, a little under one in five Americans say they are definitively not going to get the vaccine.

Additionally, with the news that some teens can now get the Pfizer/BioNTech vaccine, getting kids—and parents—vaccinated will be essential in putting the country closer to herd immunity. But, as of now, parents are split on whether they will vaccinate their children. Parents also tend to be more skeptical of the vaccine for themselves, making the road to immunizing their children more complicated.

Expectations have never been higher

The robust vaccination campaign combined with a growing sense of safety among Americans pushes economic expectations to a record 19-year high for the Ipsos/Forbes Advisor Consumer Confidence Index.

Consumers' confidence in the economy and their belief in their purchasing power fell during the early days of the pandemic. But, it fell less and rebounded quicker relative to other recessions.

It took about five years for expectations to climb back from the lows of the 2008 financial crisis. Due to the nature of this recession, people’s outlook on the future never grew as dim as it did in 2008.

But, even as Americans grow more hopeful in the economy, the recovery is not spreading equally. Confidence in the economy for lower-income Americans lags behind other groups by significant amounts, building the case that the country is in a K-shaped recovery.

Much like vaccinations and the economy, the story of America today is a divided one. The sense of whether the country is on the right track or wrong track correlates strongly with party identification. For 2020, nearly all Democrats believed the country was going in the wrong direction. As Biden, a Democrat, assumed office from Trump, a Republican, at the start of 2021, Democrats and Republicans across the country flipped on that question, with nearly all Republicans now believing the United States is on the wrong track.

While Americans are increasingly optimistic about getting back to pre-COVID life, the partisan fault lines that plagued the country before and during the pandemic will linger after COVID subsides as well. 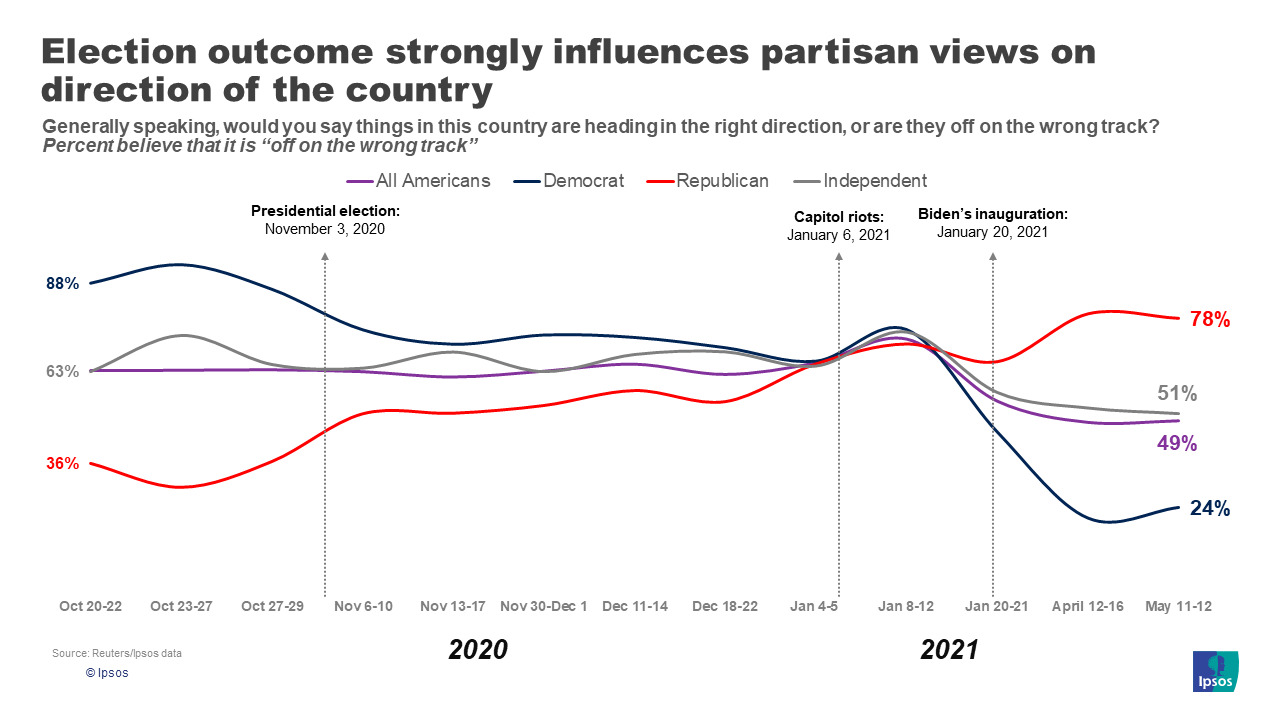 As the pandemic and the economic fallout associated with it recedes as top concerns for Americans, the road ahead may get bumpy for the Biden administration. Republicans and Democrats don't agree on what the next major issue facing the country is.

For Republicans, immigration has returned as a pressing concern, rebounding to levels last seen before the pandemic, while Democrats see racial inequality as the next major issue.

These fractures could cause Biden’s approval to dip. The president's job performance from the right and left soften somewhat on these problems compared to his performance on the pandemic.