Washington, DC, March 7, 2021 — While three in four Americans believe addressing the gender pay gap is important, only one in four say it should be a top priority at the moment, according to a global Ipsos survey conducted in collaboration with the Global Institute for Women’s Leadership at King’s College London for International Women’s Day.

The survey was conducted January 22-February 5 among more than 20,000 adults in 28 countries, including 1,000 U.S. adults. It finds that, in general, Americans are not optimistic that women will achieve equality with men as the country recovers from the pandemic. Fewer expect women to be more equal to men (11%) than think things will be just as they were before the pandemic (50%). The views of Americans on this matter tend to mirror public opinion in other countries.

To ensure that the post-pandemic recovery addresses the unique challenges that women face, Americans, and other people across the world, prioritize flexible working practices, such as working from home or working part-time, better access to healthcare services, and better mental health support services.

In the United States, the pandemic economy has decimated sectors that predominantly employ women, like hospitality, retail, and healthcare, forcing women to exit the workforce at a higher rate than men. These challenges are compounded by a persistent gender wage gap that pre-existed the pandemic. According to the US Census Bureau, American women make 82 cents on average for every dollar that men make.

Compared to the rest of the world, Americans are among those least inclined to view the gender pay gap as a top priority: on average, across the 28 countries survey, 36% say it is a top priority, compared to 24% in the U.S. 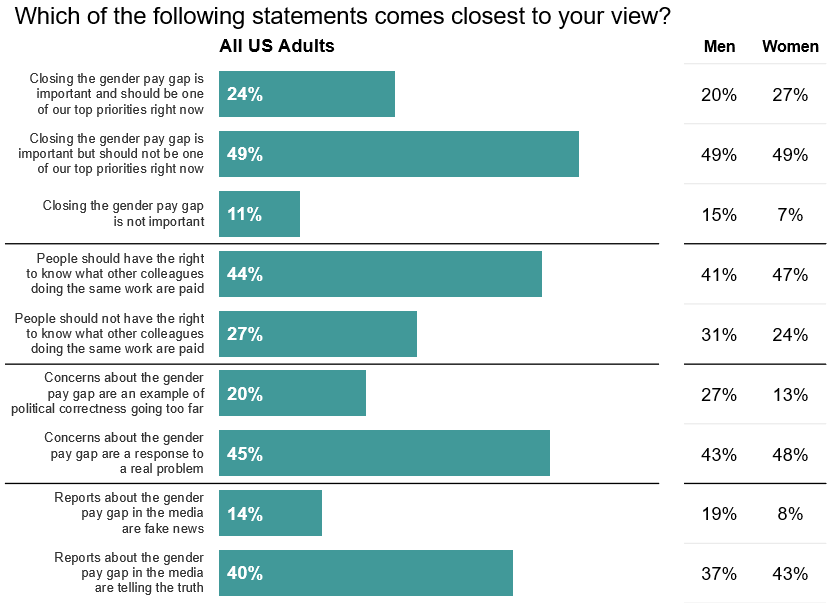 Fewer Americans (14%) believe that media reports about the gender pay gap are “fake” than believe they are real (40%), These numbers are fairly similar to the average for all countries (18% and 41%, respectively).

Americans believe that women are most likely to hold jobs as childcare providers (such as nursery workers or nannies), nurses, teachers or shop workers. 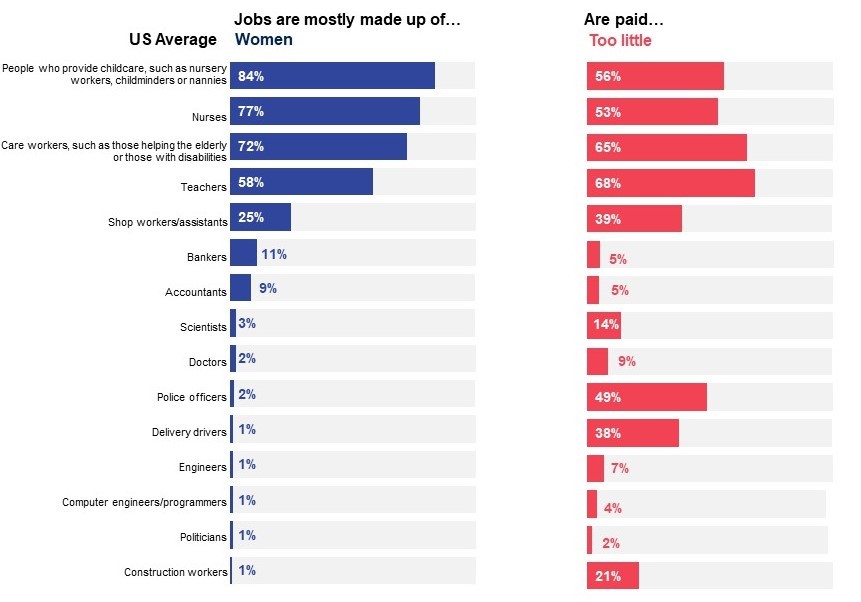 Perceptions on progress towards gender equality 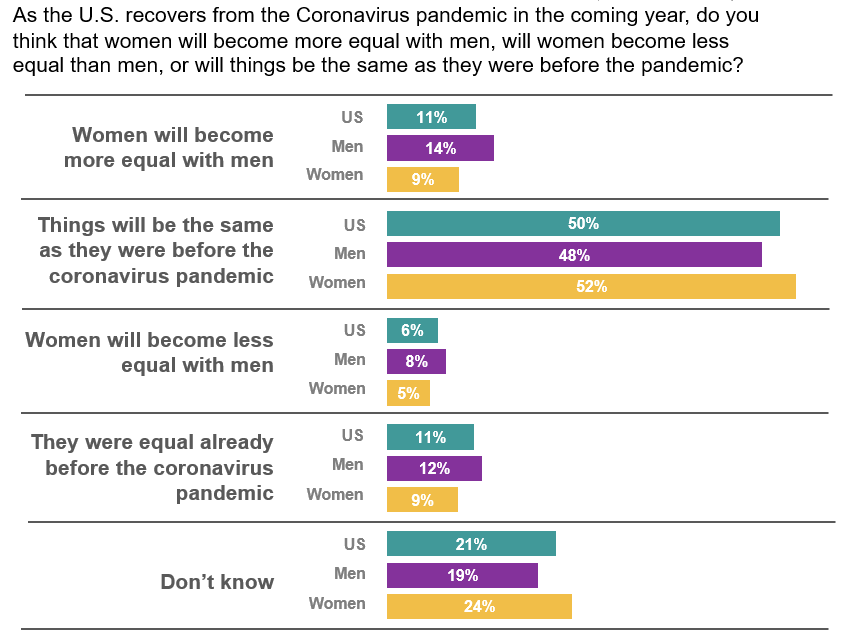 A majority of Americans believe that the pandemic has been equally negative for men and women (65%) when taking all the potential impacts into account, such as health, economic, and social. However, more (15%) believe that it has been worse for women than those who believe it was worse for men (6%).

To ensure that the post-pandemic recovery addresses the unique challenges that women face, Americans prioritize flexible working practices, such as working from home or working part-time (41%) and better access to healthcare services (33%). In third, Americans point to better mental health support services (30%).

Among 19 different characteristics that will enable politicians to succeed at handling the pandemic recovery, the three that Americans deem most important are: putting the country’s needs before politics (46%), honesty with the public (41%), and an understanding of the problems facing ordinary people (32%).

These are the results of a 28-country survey conducted by Ipsos on its Global Advisor online platform. Ipsos interviewed a total of 20,520 adults aged 18-74 in the United States, Canada, Israel, Malaysia, South Africa, and Turkey, and 16-74 in 21 other markets between January 22 and February 5, 2021.

The samples in Argentina, Australia, Belgium, Canada, France, Germany, Great Britain, Hungary, Italy, Japan, the Netherlands, Poland, South Korea, Spain, Sweden, and the U.S. can be taken as representative of their general adult population under the age of 75.

The samples in Brazil, Chile, mainland China, India, Israel, Malaysia, Mexico, Peru, Russia, Saudi Arabia, South Africa, and Turkey are more urban, more educated, and/or more affluent than the general population. The survey results for these markets should be viewed as reflecting the views of the more “connected” segment of their population.

Where results do not sum to 100 or the “difference’ appears to be +/-1 more/less than the actual, this may be due to rounding, multiple responses, or the exclusion of “don't know” or not stated responses.

The precision of Ipsos online polls is calculated using a credibility interval with a poll of 1,000 accurate to +/- 3.5 percentage points and of 500 accurate to +/- 5.0 percentage points. For more information on Ipsos' use of credibility intervals, please visit the Ipsos website. The publication of these findings abides by local rules and regulations.

Our passionately curious research professionals, analysts and scientists have built unique multi-specialist capabilities that provide true understanding and powerful insights into the actions, opinions and motivations of citizens, consumers, patients, customers, or employees. We serve more than 5000 clients across the world with 75 business solutions.