Washington, DC, December 27, 2020 - As 2020 draws to a close, a global Ipsos survey reveals that nearly all Americans agree it was a bad year for the country, and two-thirds say it was a bad year for their family. Nonetheless, Americans are optimistic about 2021, with majorities foreseeing a strong global economy and the availability of a COVID-19 vaccine. Less than half though think life in the United States will return to normal in 2021 after the effects of the COVID-19 pandemic, and even fewer predict increased social tolerance.

The survey was conducted by Ipsos on its Global Advisor platform between October 23-November 6, 2020, among 23,007 online adults under the age of 75 in 31 countries and territories. The sample includes 1,000 adults ages 18-74 in the United States.

Likely successful vaccine in 2021 but slow return to normal

Americans are optimistic that a successful vaccine will become widely available in the United States in 2021: 68% think this is likely to happen. Americans are slightly more likely than the global average to hold this view. Almost half of the people surveyed globally (47%) believe there will be a new global pandemic caused by a new virus, but just 34% of Americans say this is likely. 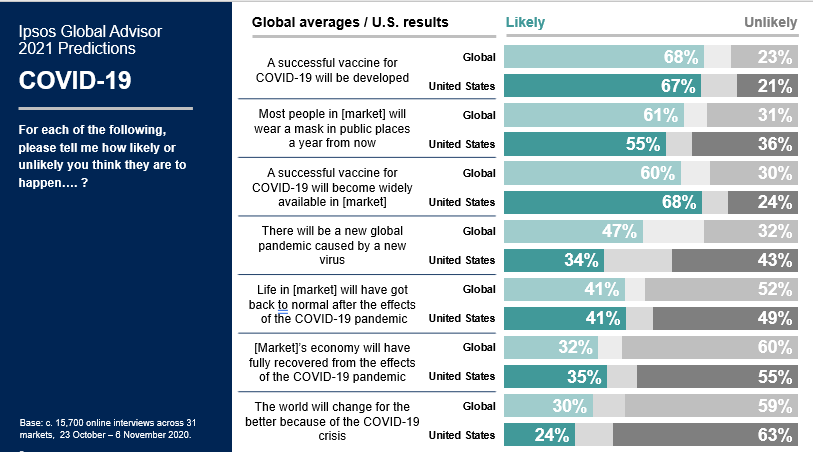 Only four in 10 (41%) say it is likely life in the United States will have got back to normal after the effects of the COVID-19 pandemic, in line with the global average. More than half (55%) believe most people will wear a mask in public places a year from now. While majorities in India, Saudi Arabia, Peru, and Malaysia believe the world will change for the better because of the pandemic, just 24% of Americans are as optimistic. Those in France (9%) are least likely to think this will happen.

Doubts about equal gender pay with optimism regarding a resilient economy

Two-thirds globally (66%) expect income inequality in their country to increase over the next year. The United States is least likely to predict this (48%) and is the only country with less than 50% saying that this is likely. In contrast, Turkey and Israel are most likely to say this will happen (85% and 84%) respectively.

Three in ten Americans (31%) say it’s likely the major stock markets around the world will crash in 2021, the same percentage of those who predicted a crash in 2020 a year ago. The United States is among nine countries and markets out of the 31 surveyed where a plurality believes major stock market crashes are unlikely in 2021.

Half of all adults globally (51%) and in the United States (50%) say it is unlikely that women will be paid the same as men for the same work. In the United States, women are less optimistic than men that this will be achieved (30% say it’s likely, compared to 49% for men). 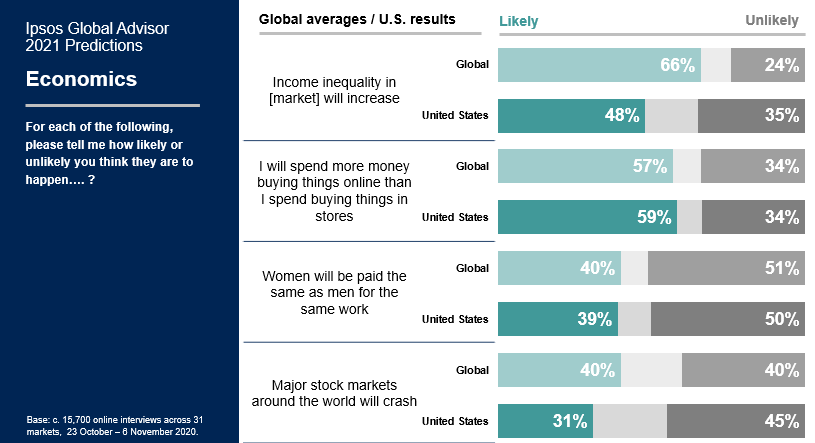 Just 26% of Americans expect people in their country to become more tolerant of each other, with 63% saying it’s unlikely to happen next year. After protests across the United States, only a third (33%) believe police in the United States will treat people equally regardless of their differences in 2021. Americans under the age of 35 are least likely to foresee this happening (23%), followed by those ages 35-49 (30%) and ages 50-74 (44%).

Nearly half (47%) say they will make a new friend in their local area, a figure which is almost twice as high in China (84%). In contrast, only 15% in Japan believe this is likely to happen. One in four Americans (26%) expect to feel lonely most of the time, in line with expectations for previous years. 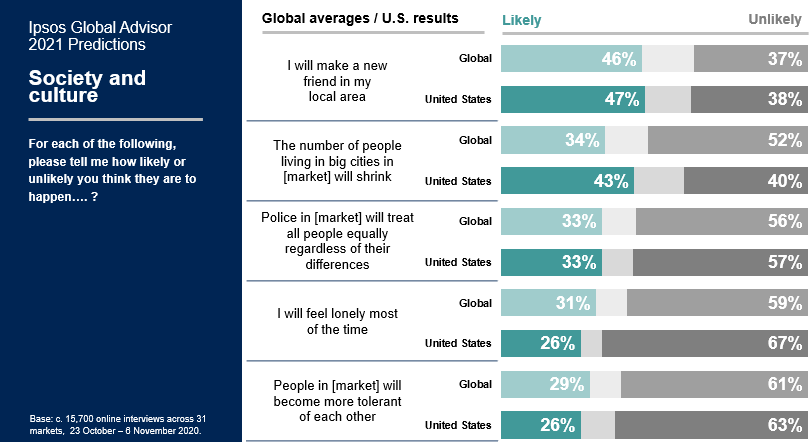 Around a third globally (36%) and in the United States (30%) say it is likely that robots will look like, think like and speak like humans next year, but more than half say it is unlikely. Just 13% of Americans say it is likely that human cloning will be legalized in some markets, compared to 21% globally and nearly half (47%) of those surveyed in Turkey.

More than a third of Americans (37%) think it’s likely that one of their online accounts will be hacked in 2021, in line with the global average and Americans’ predictions in 2019. 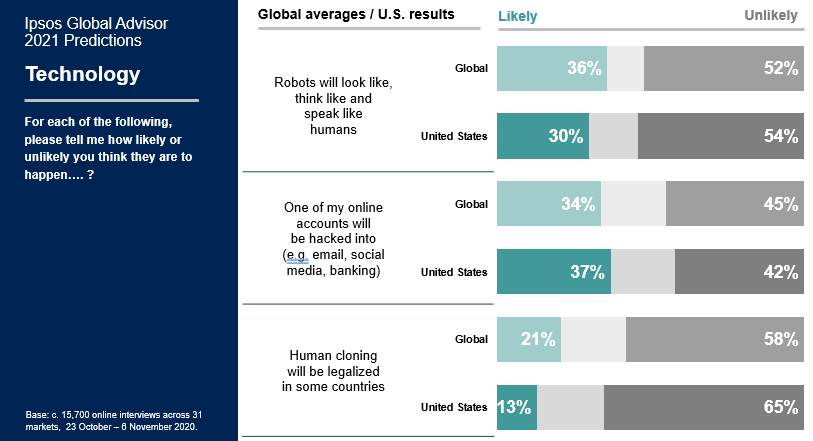 Global temperature expected to increase in 2021

A large majority around the world expect average global temperatures to increase next year (75%, similar to previous years). In the United States though, people are far less likely to say the same (63%) and are only trailed by Saudi Arabia (59%). 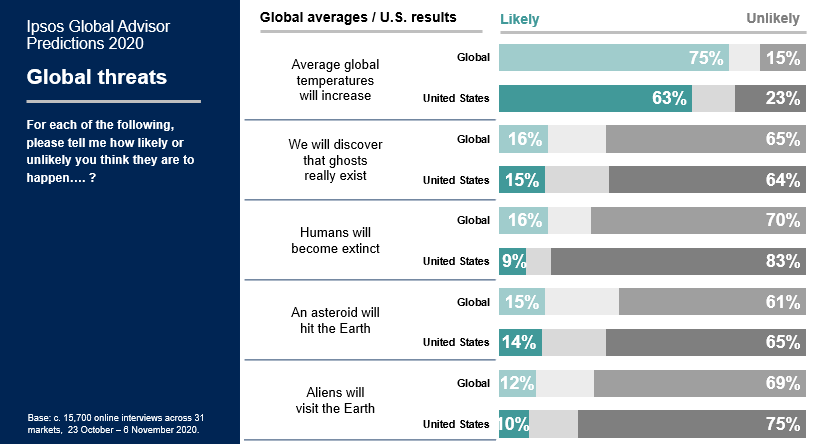 One in seven Americans (14%) think it is likely that an asteroid will hit the earth next year while one in ten expect aliens to visit the earth (10%) and humans to become extinct (9%).

2020 universally seen as a bad year, but the expectation 2021 will be better prevails 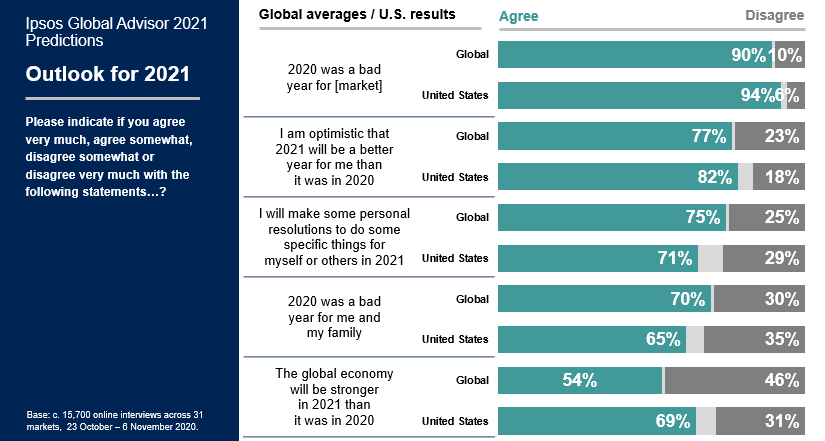 These are the results of a 31-market survey conducted by Ipsos on its Global Advisor online platform. Ipsos interviewed a total of 23,007 adults aged 21-74 in Singapore, 18-74 in United States, Canada, Hong Kong, Israel, New Zealand, Malaysia, South Africa, and Turkey, and 16-74 in 22 other markets between October 23 and November 6, 2020.

The samples in Argentina, Australia, Belgium, Canada, France, Germany, Great Britain, Hungary, Italy, Japan, the Netherlands, Poland, South Korea, Spain, Sweden, New Zealand, and the U.S. can be taken as representative of their general adult population under the age of 75.

The samples in Brazil, Chile, mainland China, Hong Kong, India, Israel, Malaysia, Mexico, Peru, Russia, Saudi Arabia, Singapore, South Africa, and Turkey are more urban, more educated, and/or more affluent than the general population. The survey results for these markets should be viewed as reflecting the views of the more “connected” segment of their population.