Toronto, ON -- A new poll conducted by global research company Ipsos for What Makes You Happy Magazine finds that while eight in 10 (77%) citizens in 24 countries generally say they are `happy' in their lives, one quarter (22%) report they are `very happy'--a key measure that identifies comparative depth and intensity of happiness among country citizens and the world. Whereas the general assessment of happiness tends to remain fairly static over time, the measure of those who are `very happy' has the greatest amount of fluctuation.

The poll of 18,687 adults conducted from November 1st to 15th 2011 also demonstrates that those who are married (26% are `very happy') appear to be the happiest when compared to all other groups, especially those who are not married (18%).

In fact, with measures tracked back to April, 2007, when respondents are asked to consider all things together, despite global financial woes and conflict, the world is apparently a happier place now than it was then when 20% reported they were `very happy'--two points back of where the world average is now.

Who are the Happiest People?

Apart from married people, demographically there is no statistical difference in happiness across gender (22%) but those who are under the age of 35 (25%) are more likely to say thet are `very happy' than those who are 35-49 (20%) and 50-64 (19%) across all countries surveyed. Socio-economics play a role as those with a high education (25%) and those with a high household income (24%) are among those most likely to be `very happy'.

Regionally, Latin America has the greatest proportion of people saying they are `very happy', with one third (32%) of their population responding this way. North America is next with 27% followed by Asia-Pacific and the Middle East and Africa tied (24%).

It is citizens in Europe who drag the global average assessment of happiness downward as only one in six (15%) say they are `very happy'. Nationally, Indonesia scores the happiest out of the 24 countries surveyed with just over half (51%) of citizens reporting they are `very happy' followed by India and Mexico at 43% each Brazil and Turkey tied at 30% each and Australia and the United States each at 28%. On the other end, Hungary (6%), South Korea (7%) and Russia (8%) have the lowest number of `very happy' people, followed by Spain (11%) and Italy (13%). 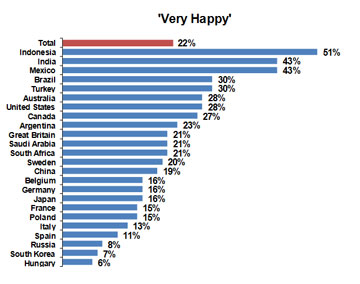 Ipsos began tracking happiness in the 24 countries in 2007 conducting it twice annually until March 2010 when the survey became monthly. Examining the timeframe between April 2007 and October 2011 invites the question: are we happier now than we were then?

Overall, the world is a happier place -- on an aggregate basis of the 24 countries, 20% of the global population reported being "very happy" in 2007 compared to 22% now. The highest range of world happiness was between March and April 2010 when the number was at its highest point of 26%. No doubt, there are numerous events and happenings that can cause happiness to go up and down -- and that's evident over the many months that the happiness measures have been tracked.

What about Individual Countries? Comparing 2007 to 2011 are their Citizens Happier or not?

Measuring the "very happy" group, the greatest improvements are found in Turkey (up 16 points since 2007) followed by Mexico (up 10 points), Australia (up 7 points), Japan (up 6 points) and India and Canada (each up 5 points).

Of the 24 countries measured less than half (9 countries) have experienced increases in happiness intensity compared with 13 that dropped and two countries with no change.

Those countries experiencing the greatest drop in happiness intensity were Brazil (down 9 points) followed by Indonesia (down 7 points), Russia (down 6 points) and South Africa (down 5 points).

The following list of countries shows the increase (+) or decline (-) of the `very happy' cohort compared with results for the same group measured in 2007:

These are some of the findings of an Ipsos Global @dvisor (#27) poll conducted for What Makes You Happy Magazine. The survey instrument is conducted monthly in 24 countries via the Ipsos Online Panel system. The countries reporting herein are Argentina, Australia, Belgium, Brazil, Canada, China, France, Germany, Great Britain, Hungary, India, Indonesia, Italy, Japan, Mexico, Poland, Russia, Saudi Arabia, South Africa, South Korea, Spain, Sweden, Turkey and the United States of America. An international sample of 18,687 adults aged 18-64 in the US and Canada, and age 16-64 in all other countries, were interviewed between November 1st and 15th, 2011. Approximately 1000+ individuals participated on a country by country basis with the exception of Argentina, Indonesia, Mexico, Poland, Saudi Arabia, South Africa, South Korea, Sweden, Russia and Turkey, where each have a sample 500+. Weighting was then employed to balance demographics and ensure that the sample's composition reflects that of the adult population according to the most recent country Census data and to provide results intended to approximate the sample universe. A survey with an unweighted probability sample of this size and a 100% response rate would have an estimated margin of error of +/-3.1 percentage points for a sample of 1,000 and an estimated margin of error of +/- 4.5 percentage points for a sample of 500 19 times out of 20 per country of what the results would have been had the entire population of the specifically aged adults in that country been polled. The exact question asked was `Taking all things together, would you say you are very happy, rather happy, not very happy or not happy at all?'.

Ipsos is a leading global survey-based market research company, owned and managed by research professionals. Ipsos helps interpret, simulate, and anticipate the needs and responses of consumers, customers, and citizens around the world. Member companies assess market potential and interpret market trends. They develop and build brands. They help clients build long-term relationships with their customers. They test advertising and study audience responses to various media. They measure public opinion around the globe. Ipsos member companies offer expertise in advertising, customer loyalty, marketing, media, and public affairs research, as well as forecasting, modeling, and consulting. Ipsos has a full line of custom, syndicated, omnibus, panel, and online research products and services, guided by industry experts and bolstered by advanced analytics and methodologies. The company was founded in 1975 and has been publicly traded since 1999. In 2010, Ipsos generated global revenues of e1.140 billion ($1.6 billion U.S.). Visit www.ipsos-na.com to learn more about Ipsos offerings and capabilities. Ipsos, listed on the Eurolist of Euronext - Comp B, is part of SBF 120 and the Mid-100 Index, adheres to the Next Prime segment and is eligible to the Deferred Settlement System. Isin FR0000073298, Reuters ISOS.PA, Bloomberg IPS:FP.