An event like the storming of the U.S. Capitol does not occur in a vacuum. The underlying forces and belief systems that culminated in a mob descending on the halls of Congress have been building for some time.

The fault lines in the nation’s understanding of what is fact and what is fiction have long been apparent. The 2020 election, which both parties saw as a “battle for the soul of the nation,” further exacerbated these rifts.

While a substantial number of Americans rejected the reality of President-elect Joe Biden’s win soon after the election was called in his favor, spurred on by President Trump and his allies openly contesting the results, the groundwork had been laid well before November 3rd. Reuters/Ipsos polling traces how some Americans were predisposed to doubt the legitimacy of the election no matter what the outcome was. 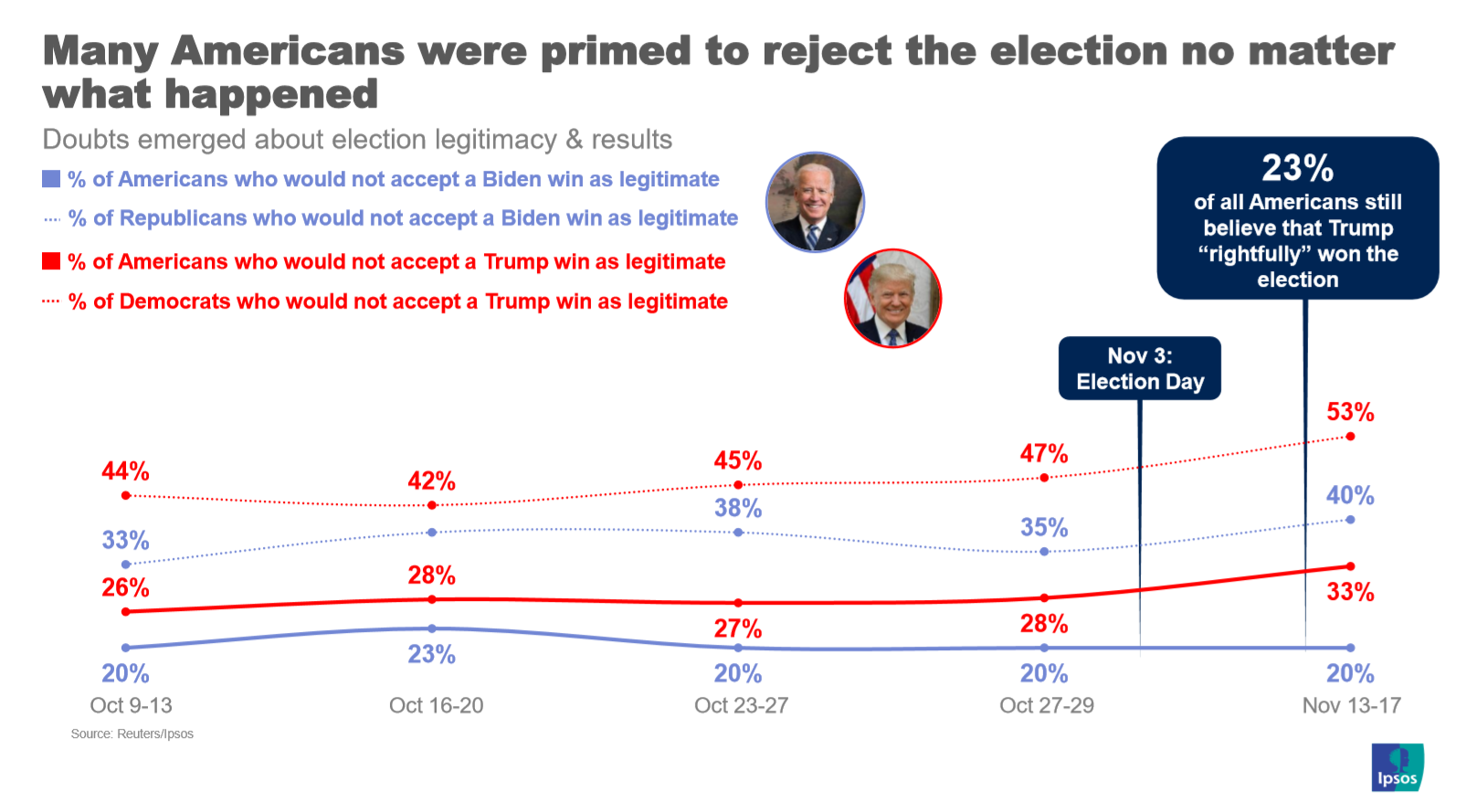 Now, more than two months after the election, the (false) belief that the outcome was rigged in Biden’s favor still holds currency among some. Despite the reassurance of election officials nationwide and judges dismissing Team Trump’s legal efforts to overturn the results, 62% of Republicans believe that the 2020 election "was the result of illegal voting or election rigging," according to a recent Reuters/Ipsos survey. Views have not changed in a statistically meaningful way even after the events of January 6th. 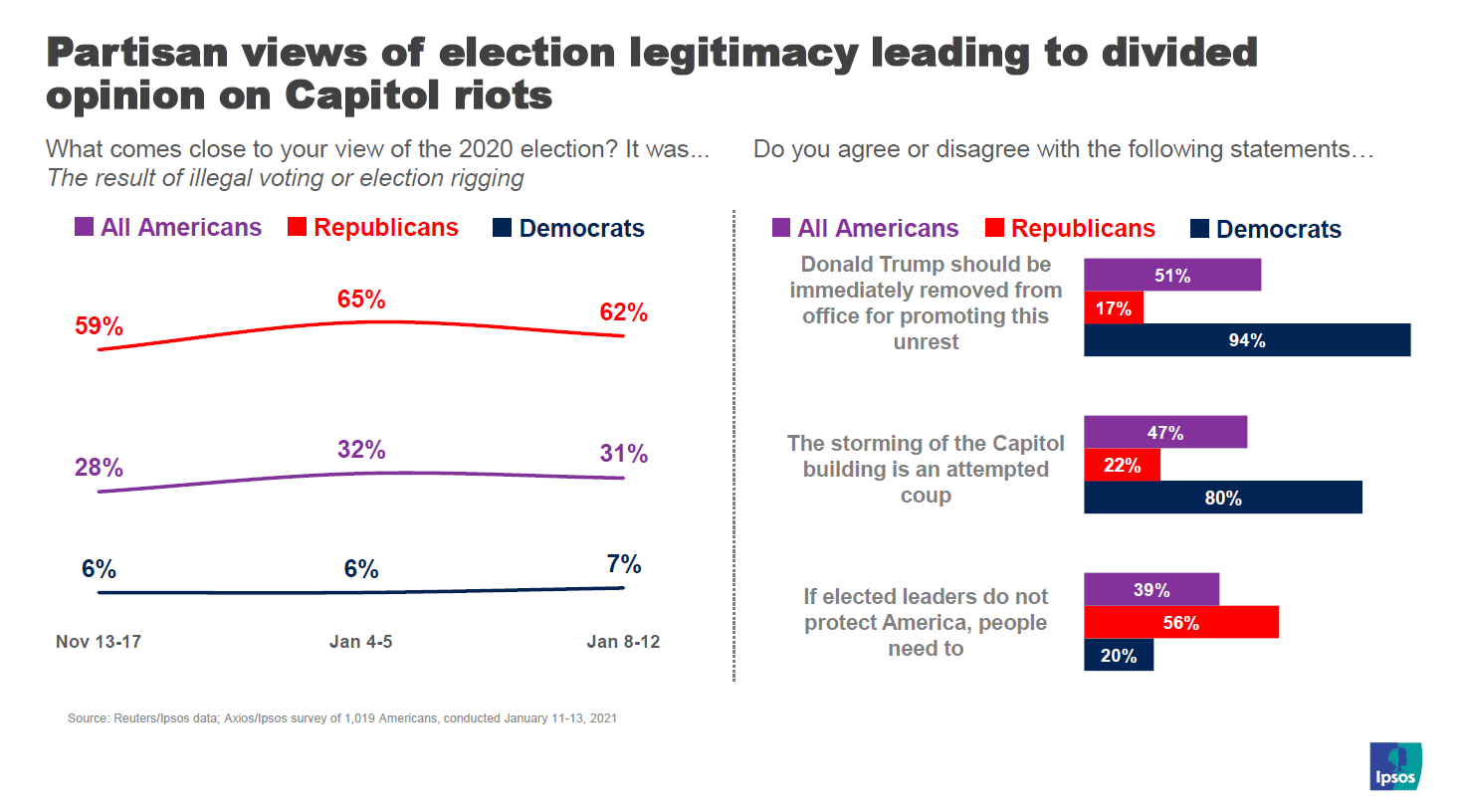 The riot at the Capitol has generated yet more division as partisans disagree on what the consequences should be. While Trump has less than a week left of his term, Democrats nearly universally believe that he should be removed from office for his role in the riot. Fewer than one in five Republicans agree. The same divisions are present when asked whether the event was an attempted coup.

These competing takes on reality did not appear out of thin air. They go hand in hand with the broader spread of misinformation and other conspiracy theories. Once fringe, these views now rally a significant number of adherents.

As a December NPR/Ipsos survey found, 39% of Americans, including 71% of Republicans, believe there is a “deep state” working to undermine President Trump. Another 17% of all Americans believe in one of the central tenets of the QAnon movement – that "a group of Satan-worshipping elites who run a child sex ring are trying to control our politics and media.” Further, 37% are “not sure” if the latter point is true of false, suggesting that an even greater number believe this concept has some degree of credibility to it. These beliefs helped foster the movement that drove thousands of rioters to the Capitol on January 6th.

Realigning the public around a shared reality will be one of the central challenges for the nation moving forward.

While the riot on Capitol Hill may have been an inflection point for some Republicans, causing them to break with Trump, it appears that the bulk of his base is not deterred. Instead, there is a new schism in the party, with those who identify as “traditional Republicans” in one camp and those who identify as “Trump supporters” in the other. And while support for Trump is, naturally, strongest among self-identified Trump supporters, the majority of the Republican base still embraces Trump’s leadership role in the party and rejects the notion that he is to blame for the actions of his supporters. 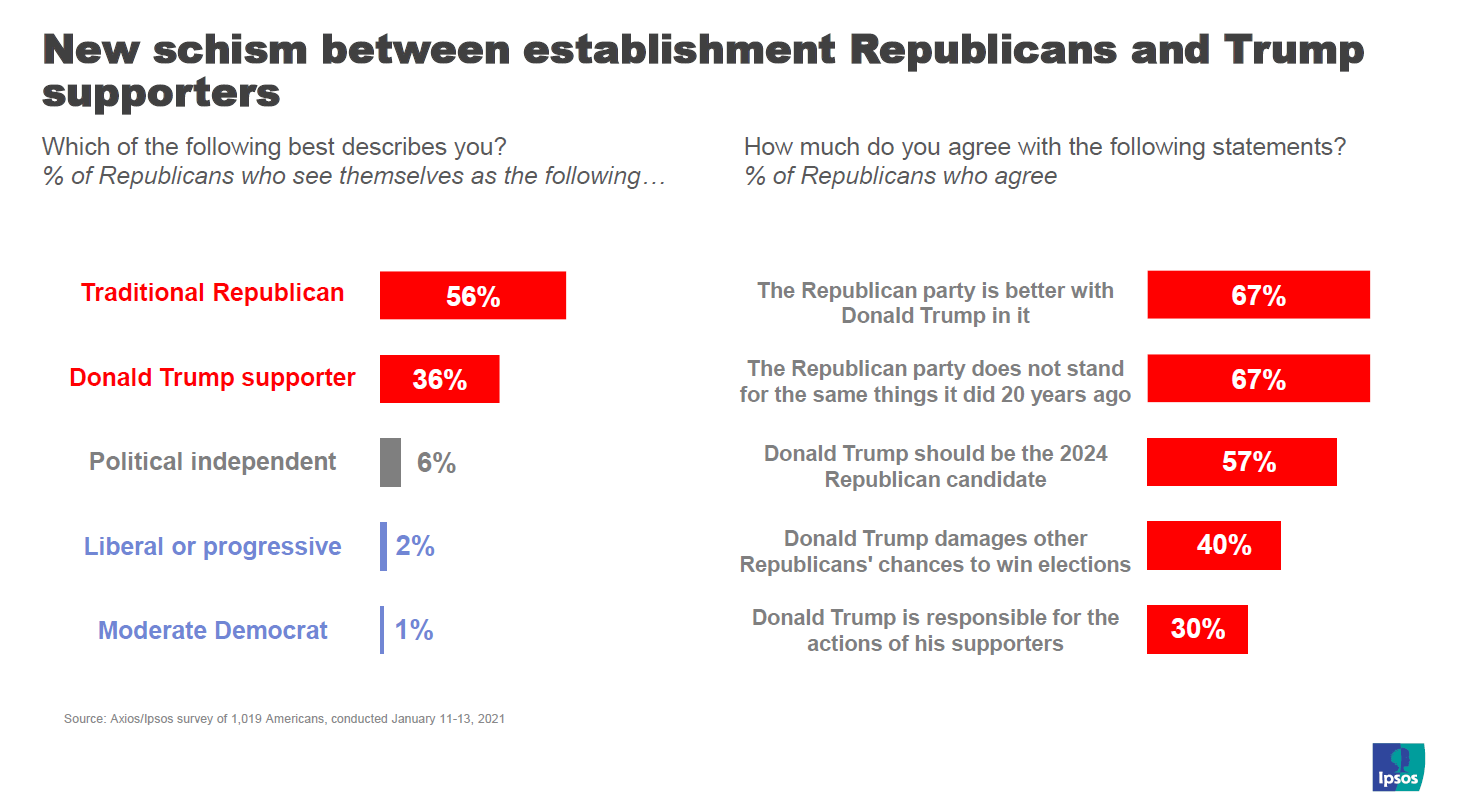 All this points to how enduring Trump’s appeal is. As an Ipsos analysis of Trump’s “brand” profile this summer found, Trump evokes either love or hate – there is no middle ground. The cult of personality surrounding him is the key to his success as a politician, and the core of how he is able to impress his version of reality on his followers so readily.

While the conspiracy theorists and election deniers may still be the minority, the consequences of fanning the flames of disbelief and allowing misinformation to spread unchecked have now been spelled out in stark terms. Yet reversing these trends is not so simple.  For some, alternative facts still hold more sway than the more prosaic and disappointing reality in which Trump lost.