Humans have always turned to the planets and the stars to explain the world around them. In our recent survey, we investigate which Americans see themselves reflected in their zodiac sign.

People who see themselves in their sign are more likely to come from historically out-of-power groups, according to our new poll. For instance, women (57%) identify more strongly than men (48%) with their astrological sign. Non-white respondents (64%) and the young (64%) also see themselves in their signs at a higher rate than older or white adults. This trend also appears with part-time employees (67%) and with those who are not married (61%). 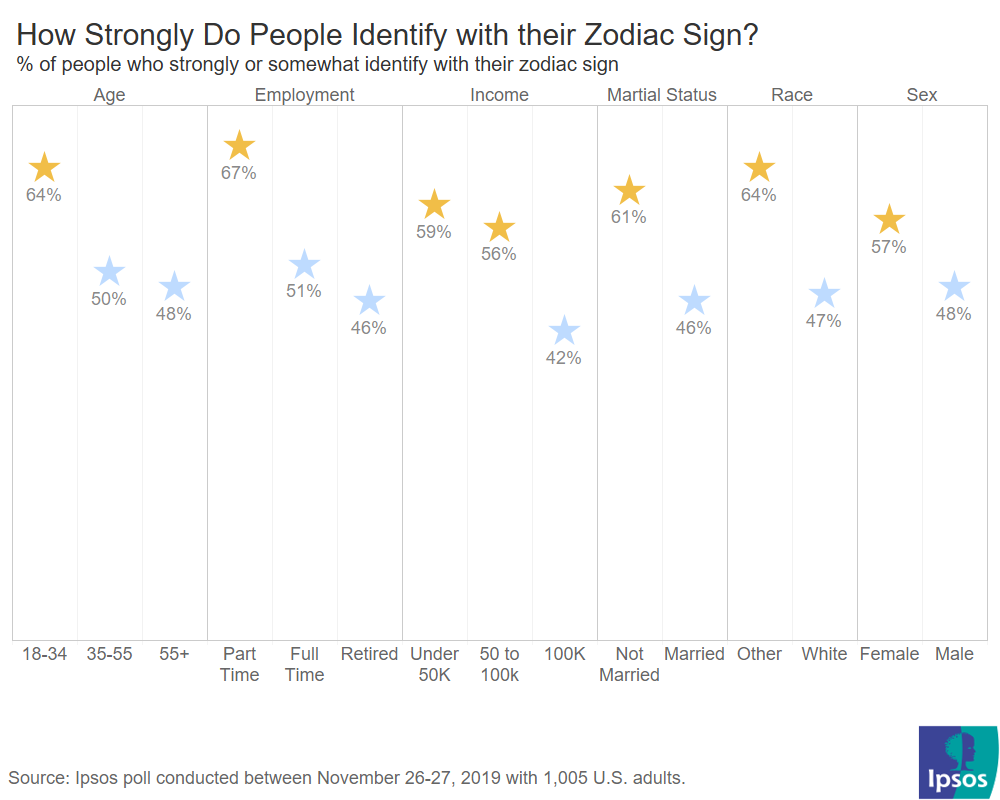 This finding corresponds with data from the commercial marketplace. 87% of Co-Star users are female and the average age of users is 24. In the Lifestyle category of the iOS store, the personalized astrology app is the sixth most popular app.

Psychologist Graham Tyson conducted a study in 1982 to investigate just that, finding people who consult astrologers did so, more often than not, in response to stress.

While only a fifth of respondents in our survey agreed that they turn to astrology when things go wrong in their life, Tyson similarly found that people engaging in astrological practice were disproportionally female, young, “martially marginal” and were part of religious groups outside of the Judeo-Christian faith.

Bertram Malle, a social cognitive scientist at Brown University, told the Atlantic that “full-fledged astrology provides a powerful vocabulary to capture not only personality but also life’s challenges and opportunities.” In other words, astrology can act as a coping mechanism to voice worries and hopes in times of change.

But the stars are not just a place to turn to in times of need. The combination of stress and age-old auguring are a vibrant business and marketplace with tech making increasing inroads into astrology.

Traditionally, horoscopes were the domain of a singular column in a newspaper or the stomping ground of New Age believers in dusty bookshops. In popular culture, the Sunday Express enlisted famous astrologer R. H. Naylor to produce a weekly column after he wrote a popular natal chart for Princess Margret’s birth in 1930. Over the course of the years, the piece morphed into what we today know as a horoscope, a brief glimpse into what is in store for each sign in the days, weeks, and months ahead.

But increasingly stress, astrology, and tech go together.

Overall, Americans spent $2.2 billion on mystical and psychic services last year, according to IBISWorld. Social media and mobile devices, where content is personalized, informal, and distributed outside of mainstream gatekeepers, are a match made in heaven for the astrological industry.

The growth of the digital astrology industry is bolstered by a media environment that speaks to its strengths, and a consumer base that is primed for its services, looking for language to express change. As we investigate the polls, many will be looking to the stars for answers as well.