Washington, DC, March 26, 2021 — An Ipsos survey in partnership with Kings College London’s Policy Institute finds that people from 28 countries, including Americans, tend to view income and wealth disparities as the most serious type of inequality in their country. When presented with seven types of inequality and asked which they think are most serious, an average of 60% across all countries, including 57% in the United States select income and wealth inequality.

Americans are more likely to select inequality between racial or ethnic groups (55% do so) than are people from any of the other 27 countries surveyed with the exception of South Africa (65%). While they rank second in the U.S., racial and ethnic disparities rank only sixth globally as they are cited by an average of 29% across all countries.

Inequality between more or less deprived areas ranks second globally and third in the U.S. It is selected by 42% on average across the 28 countries surveyed and 38% of Americans. 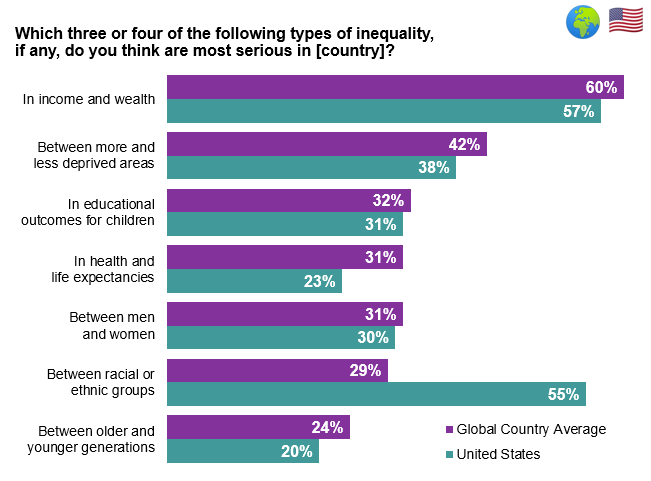 There are 10-point differences both globally and in the U.S. between the percentages of women and men who view inequality between genders among the most serious ones in their country: 36% of women vs. 26% of men on average globally, and 35% of women vs. 25% of men in the U.S.

Globally and in the U.S., younger people (under age 35) are more likely to highlight inequality between racial or ethnic groups and between men and women as serious concerns than are their older compatriots.

Inequality between racial or ethnic groups

Inequality in educational outcomes for children

Inequality in health and life expectancies

The samples in Argentina, Australia, Belgium, Canada, France, Germany, Great Britain, Hungary, Italy, Japan, the Netherlands, Poland, South Korea, Spain, Sweden and the U.S. can be taken as representative of their general adult population under the age of 75. The samples in Brazil, Chile, mainland China, India, Israel, Malaysia, Mexico, Peru, Russia, Saudi Arabia, Singapore, South Africa, and Turkey are more urban, more educated, and/or more affluent than the general population. The survey results for these markets should be viewed as reflecting the views of the more “connected” segment of their population.

“The Global Country Average” reflects the average result for all the countries where the survey was conducted. It has not been adjusted to the population size of each country and is not intended to suggest a total result.”

Where results do not sum to 100 or the ‘difference’ appears to be +/-1 more/less than the actual, this may be due to rounding, multiple responses, or the exclusion of “don’t know” or not stated responses.