Joe Biden remains the favorite to win the 2020 presidential election and will almost certainly win the popular vote. However, President Trump still has some paths to an Electoral College victory due to his continued strength in a handful of key battleground states.

As in 2016, the race is full of mixed signals, leaving plenty of room for uncertainty. Among these are Trump’s steadily solid approval ratings contrasted with Biden’s continued strength on the main issue defining this election – the coronavirus.

The focus on the coronavirus is only intensifying as the U.S. enters its third peak. Trump so far has been unable to pivot the conversation away from the pandemic to issues like the economy, where he is seen as stronger.

As they did in 2016, the polls overwhelmingly favor the Democratic contender in the race for the White House. Are we poised for a repeat upset victory, this time from an incumbent president?

Perhaps. While Joe Biden is favored to win, President Trump still has some avenues to victory, namely through eking out wins again in the handful of swing states that broke for him in 2016. Trump’s chances of winning reelection at this stage are about one in four. 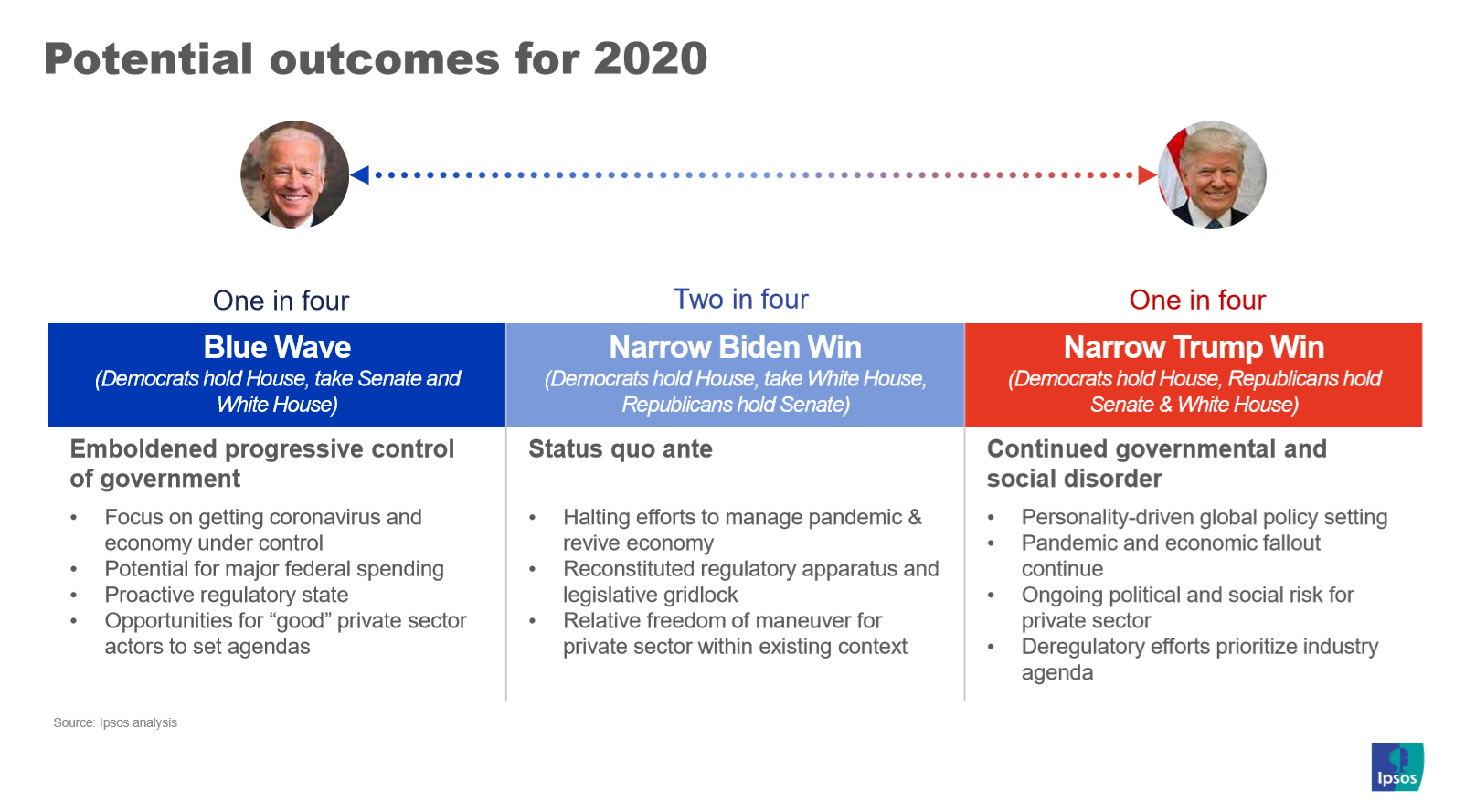 This is because the election will ultimately be a referendum on two things – Trump, and the coronavirus.

Trump is at the center of the election; people are strongly driven either to vote for or against him.  Relative to the intense emotion that Trump evokes, Biden remains a more peripheral figure. His appeal to his supporters is more muted – and in fact he derives a significant measure of support from those turned off by the negative qualities they see in Trump. 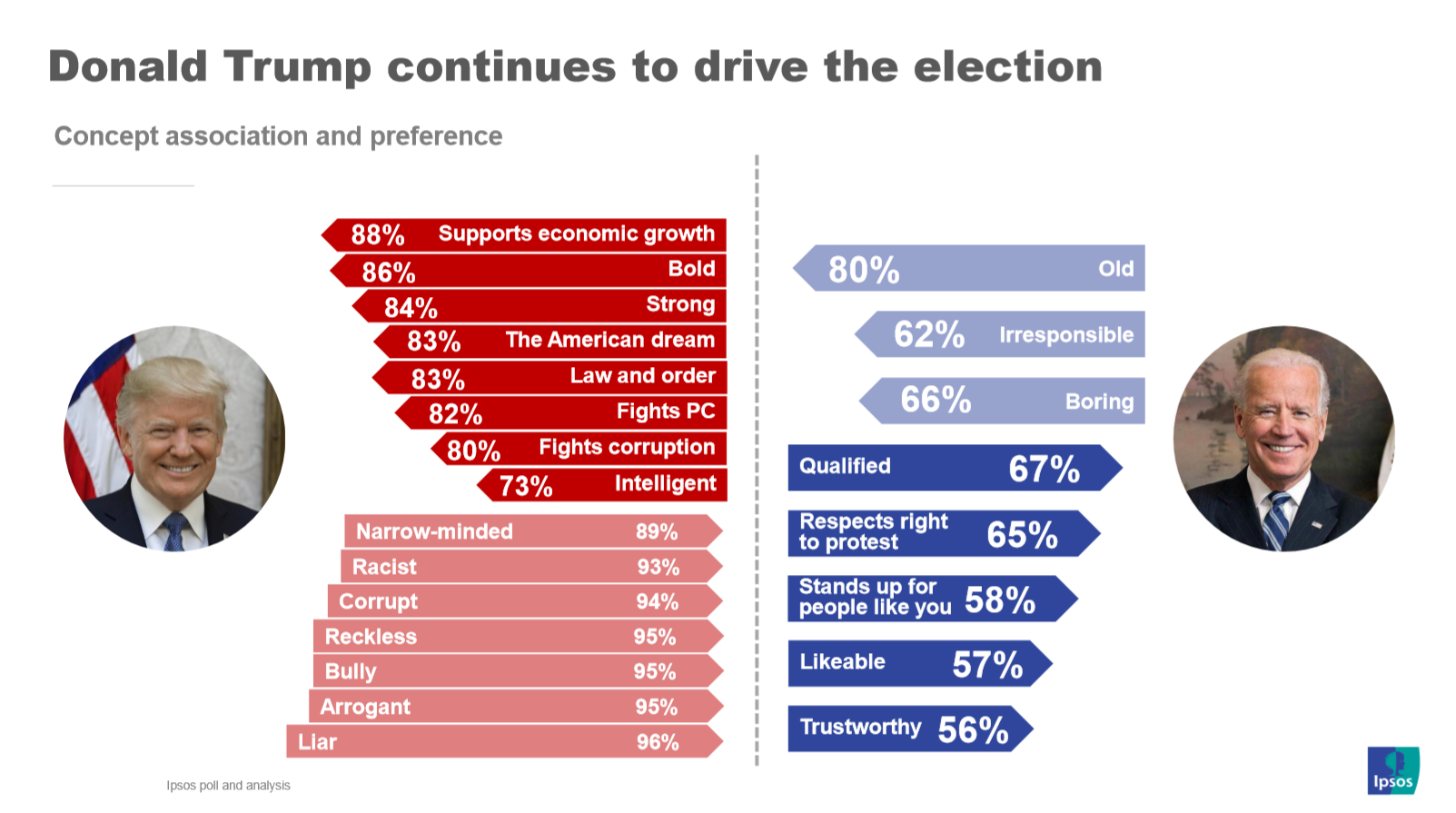 Despite the negative reactions Trump evokes and Biden’s significant lead in the polls, Trump is the dominant figure in this election because of the intensity of feeling around him. His brand is far more visible and his ability to dominate the narrative more locked in. But, so far, he has not capitalized on that strength to reach out to more middle-of-the-road voters. Instead, he has doubled down on an appeal to his base, causing him to shed support from Independents and others who might have been more amenable to voting for him otherwise.

Yet despite the pandemic, volatile state of the economy, and many scandals of his presidency, Trump’s approval rating continues to sit at 40%. This is not an excellent place to be, but it is strong enough to give him a more than 50% chance of winning reelection. It is the reason why earlier in the year, Ipsos believed he was favored to win. 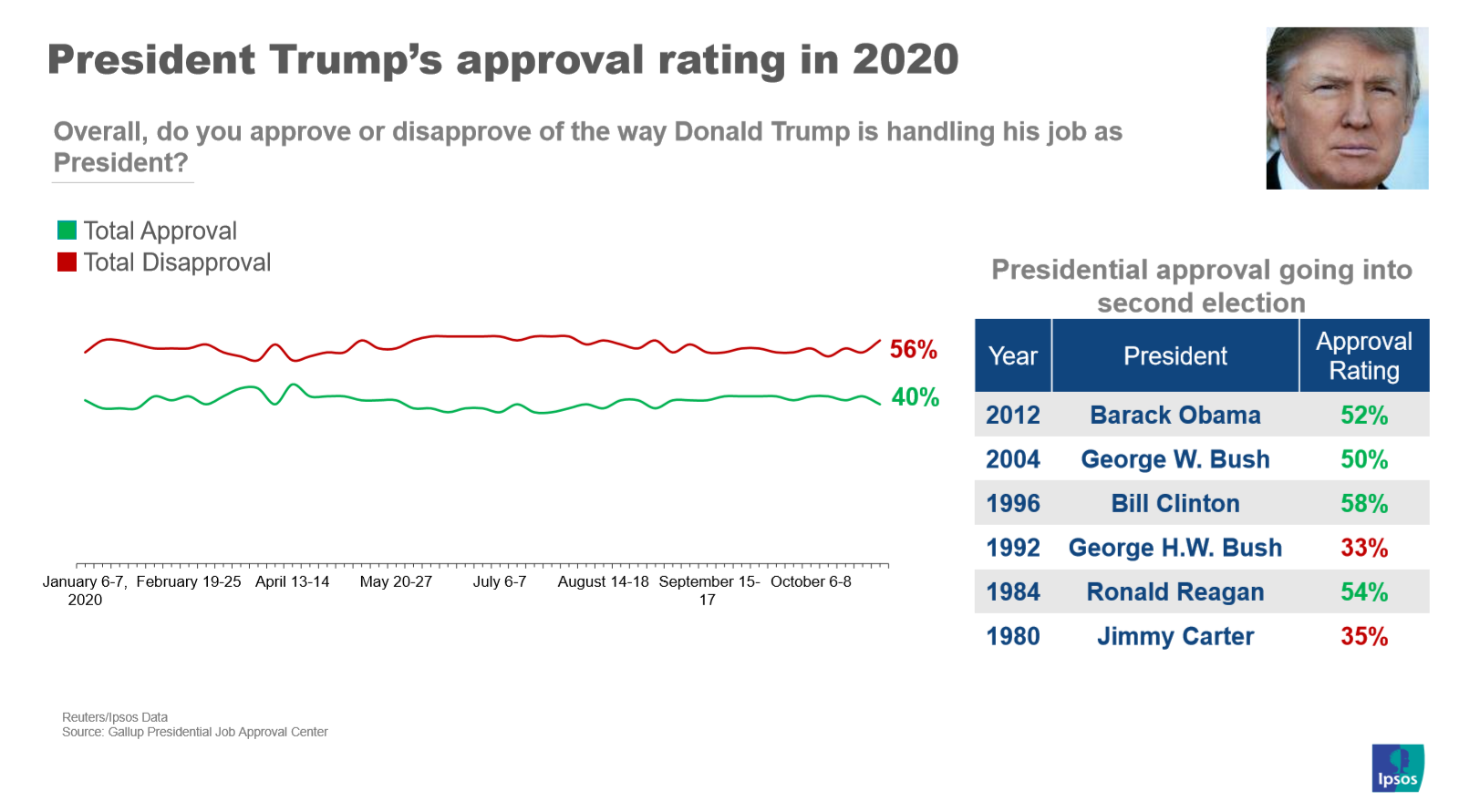 And on developing an effective plan to address the pandemic, Biden is seen as a better choice than Trump by 14 points. As just one further proof point of Trump’s perceived lack of strength and credibility on the virus, 19% of Americans say they would get a vaccine if Trump told them to, compared to the 62% who would if their doctor told them to.

This is the primary reason why Trump is in a weak position heading into November. Had the pandemic not occurred, Trump could have kept the conversation more squarely in terrain where he is stronger, such as the economy or job creation.

Nevertheless, Trump still has a few paths to victory. Though there is a smaller pool of undecided voters this cycle, the 6% who remain could still add some volatility to the mix, as could the voting process itself. More than 80 million Americans have cast a ballot so far. Though Biden voters have had greater turnout at this point, voting intent is equivalent across the parties. Most crucially, a number of the swing states – like Arizona, Florida, and North Carolina – still could come down to a coin toss. 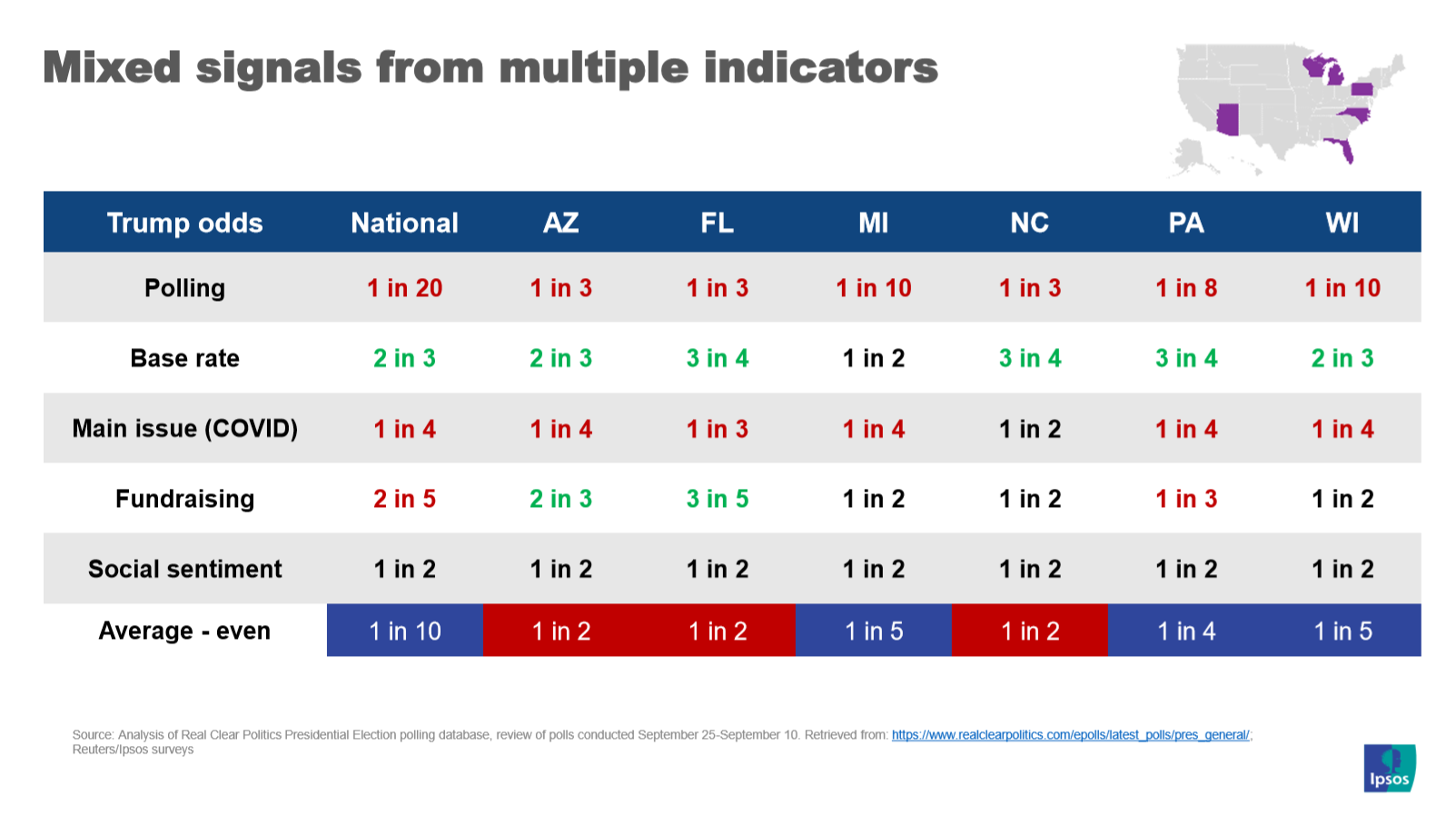 To understand the full range of possible outcomes in the 2020 election, it is essential to look beyond the polls alone. As in 2016, the signals are mixed. To parse them, it is essential to consider a range of factors, including the incumbent’s approval ratings, primary issues driving voter decisions, candidates’ brand profiles, and trends in key demographics and battleground states.

These are all a necessary part of developing a more complete picture of where the race is really heading. As we saw in 2016 when Hillary Clinton’s lead abruptly narrowed in the last few weeks of the campaign, the race could still be volatile in the states that will determine the direction of the Electoral College. To minimize any possible surprises, Ipsos will keep polling right up until election day.