Coronavirus deaths recently surpassed 200,000 in the United States; with cooler weather, we may see a resurgence in new cases.

The coronavirus remains the defining issue of this election cycle, and the economy is a leading secondary issue.

Both sides tend to frame the election in existential terms, viewing it as a “battle for the soul of the nation,” regardless of political affiliation.

All in all, our indicators suggest that Biden is the slight favorite to win.

Though Americans now largely interpret the world through a partisan lens, there are some surprising points of agreement. Referring back to a statement from Joe Biden’s acceptance speech at the Democratic National Convention, Ipsos polling found that a majority of Americans see the upcoming election as a “battle for the soul of the nation,” regardless of political affiliation.

In short, most Americans see the upcoming election as an existential threat. 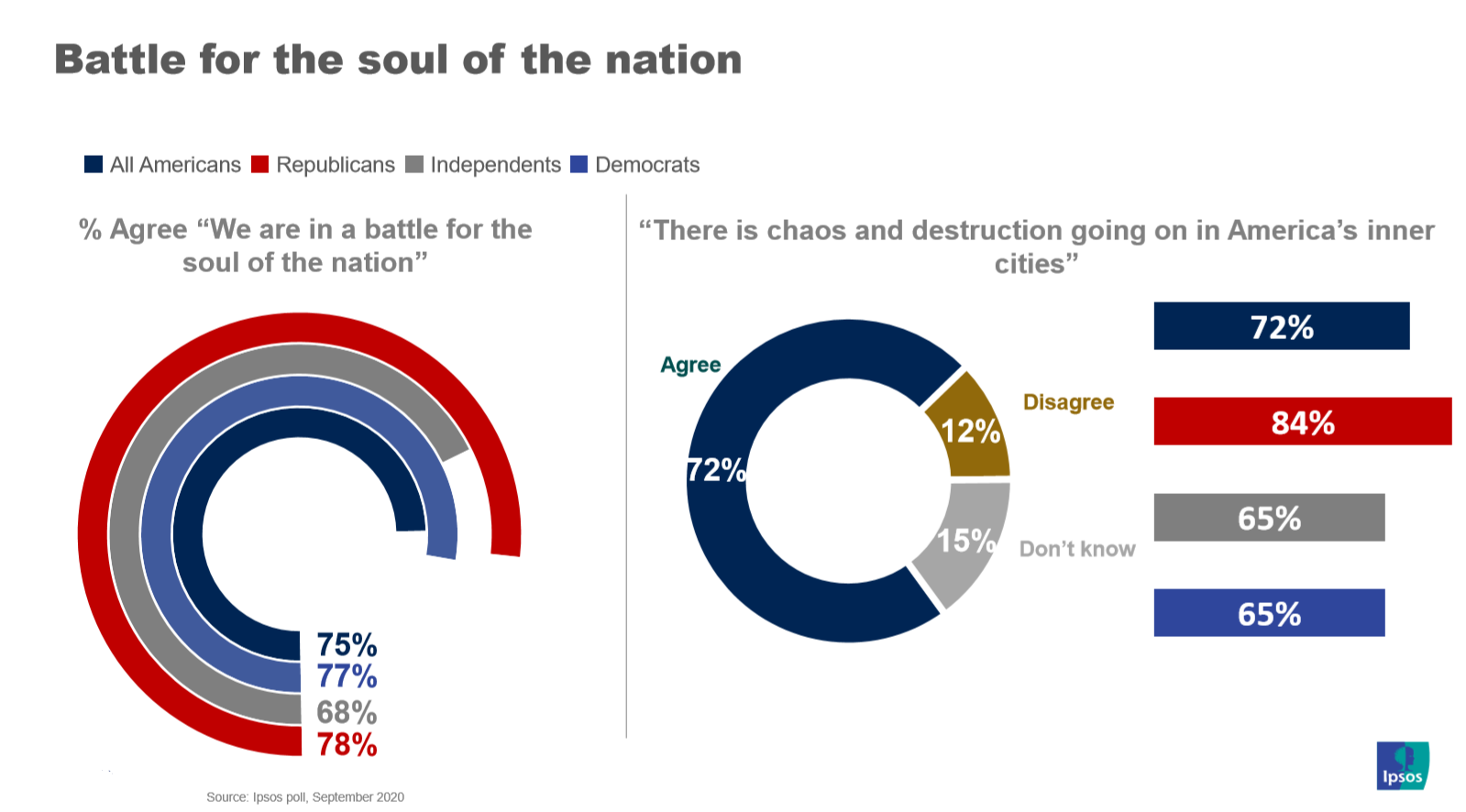 But here, agreement ends. Both parties want very different solutions to the problem of the upcoming election, and, beyond that, they do not agree on the same set of facts driving the presidential race.

This is because Democrats and Republicans are living in different realities, largely contingent on where they get their news. As just one example of our divergent national narratives, Americans hold opposing views on the coronavirus death toll. Republicans and FOX News viewers are much more likely to believe that the official statistics are an overcount; Democrats and those who get their information from the mainstream news think they are likely an undercount. A similar pattern plays out in views on how Trump has handled the coronavirus pandemic. 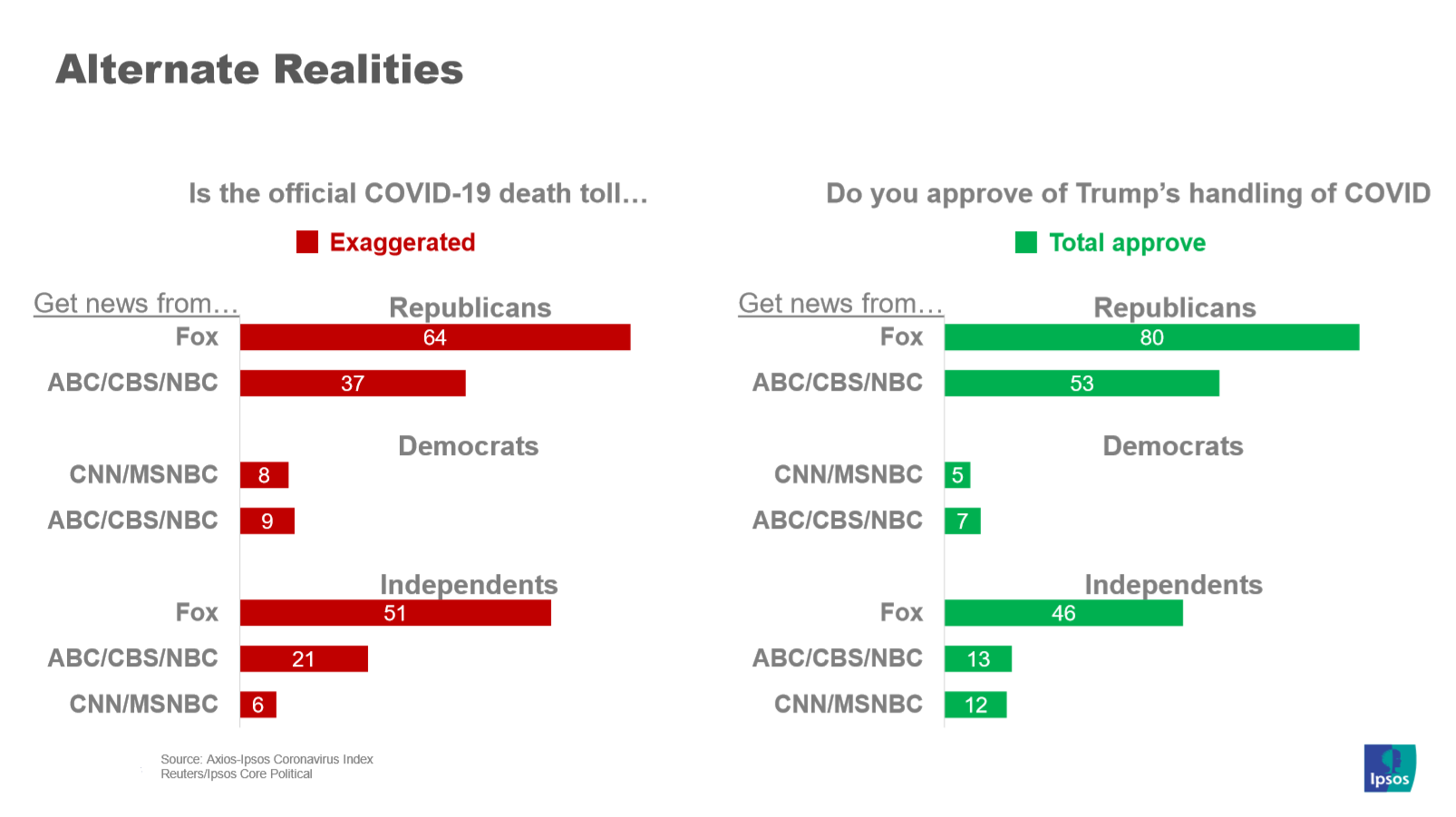 Given these fractures, we likely should not expect new facts or events to substantially alter the race or bring the two sides closer together. Our indicators increasingly suggest that at this point, many minds are made up about the two main candidates. As we’ve seen, Trump’s approval rating has stayed remarkably stable despite an impeachment, pandemic, and economic upheaval.

Nevertheless, the election is far from set in stone, as we will explore below.

This is a critical point because the candidate strongest on the main issue typically wins. If conventional wisdom holds true, Biden should have the advantage. However, it’s still an open question of whether the election will come down to COVID or the economy, particularly in the battleground states. 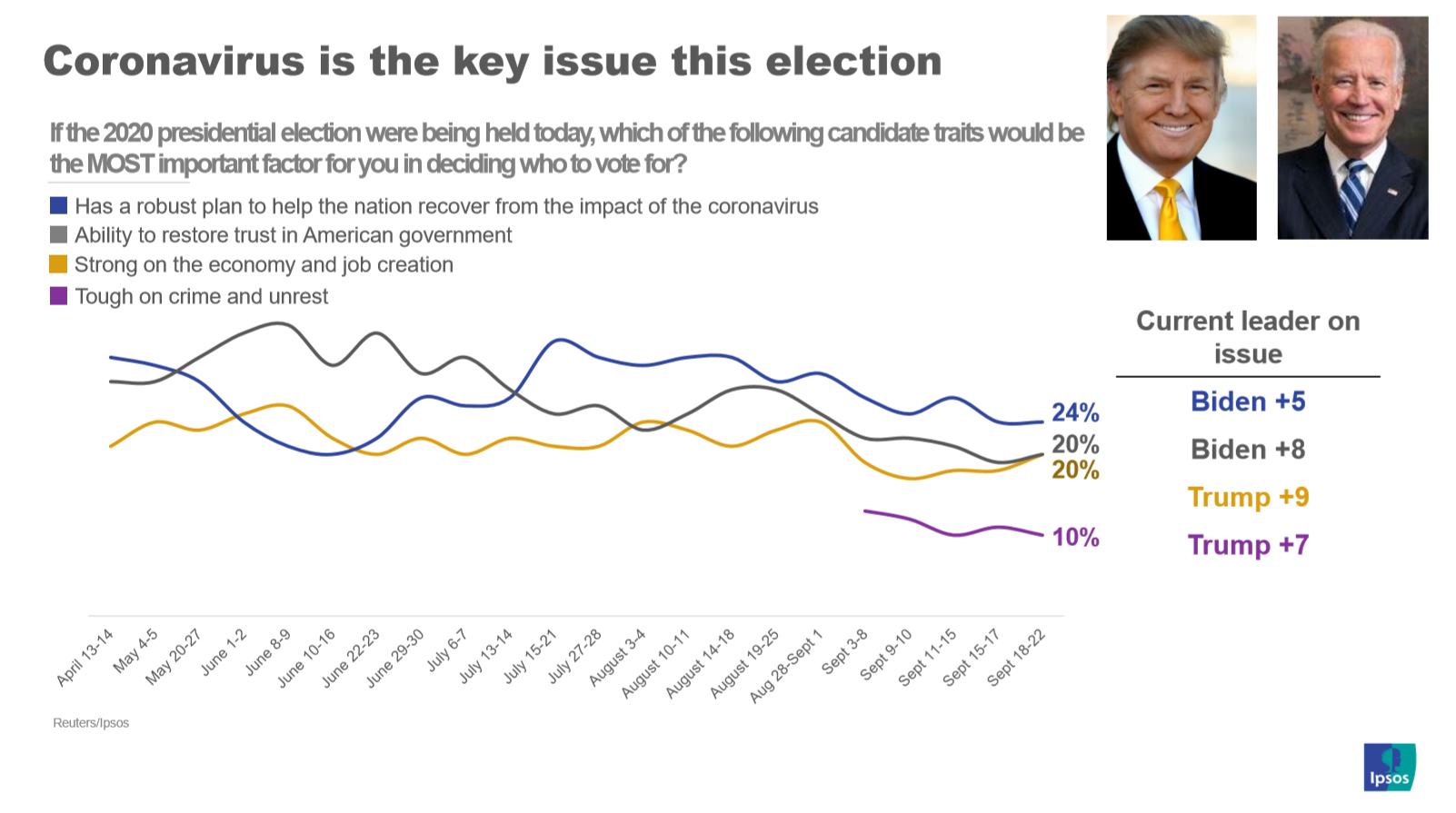 Questions of the main issue aside, other key indicators are largely good for Biden.

Reuters/Ipsos polling gives Biden a fairly consistent 8- to 9-point lead among likely voters. This is largely consistent with other polling averages.

And in what could be an ominous sign for Trump, he doesn’t appear to be closing the deal with non-college educated white voters to the same extent he did in 2016. In fact, this group shows signs of shifting towards Biden, who typically fares well among blue-collar Americans. This will likely remain one of the open questions of the election, along with coronavirus vs. economy dichotomy – can Trump reel this constituency in, to the same degree he did in 2016?

Further, this time around, there are fewer undecided voters than there were at this point in 2016. Reuters/Ipsos polling puts the pool of undecided voters at just 8%, consistent with past election cycles other than 2016. If this trend continues, it is possible only 4-5% of the electorate will be undecided by election day. If that’s the case and Biden maintains his lead, it is hard to see how Trump will be able to replicate his 2016 win when undecideds broke for him. 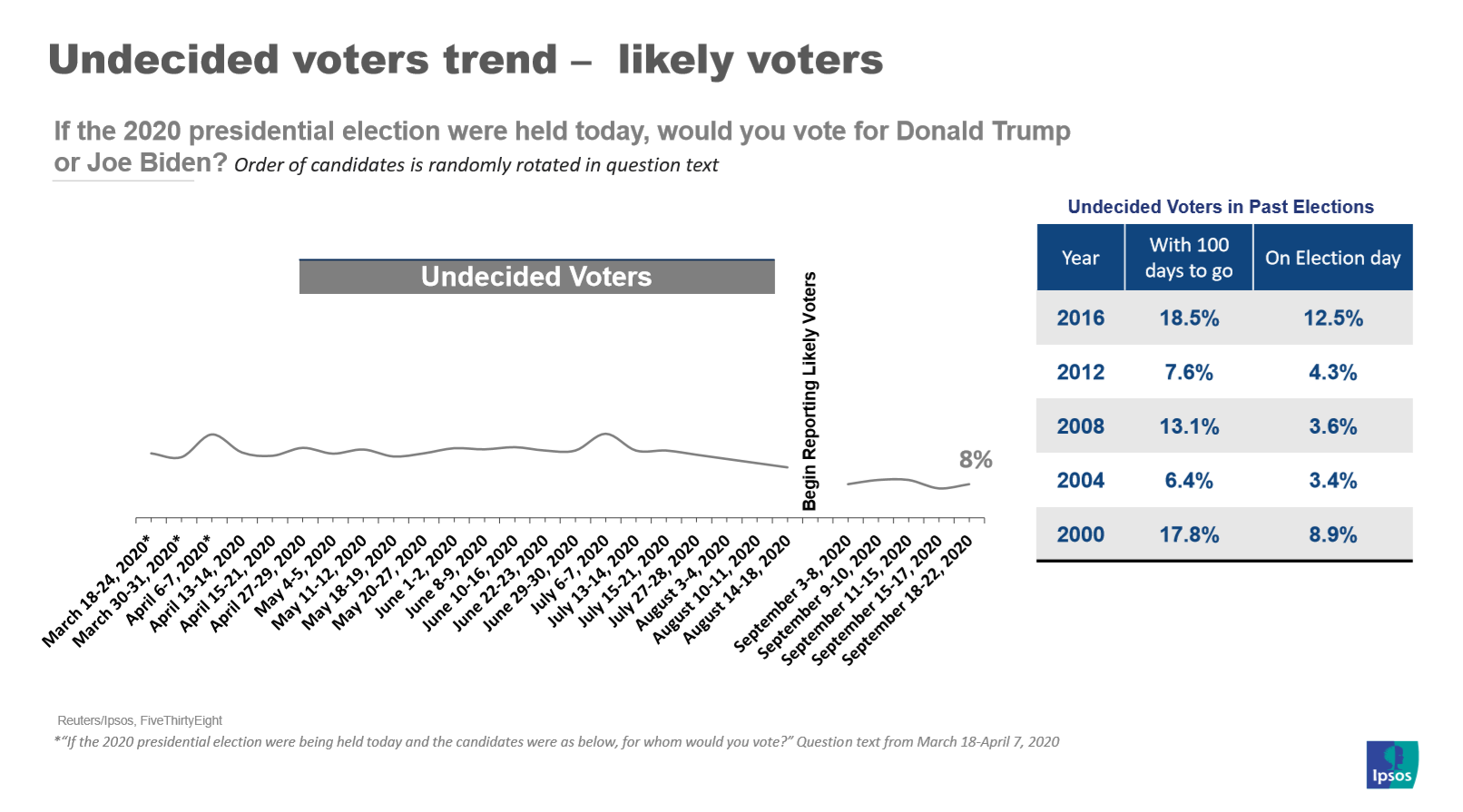 Additionally, we are seeing an increase in the proportion of Democrats who say they are likely to vote; while voter intent hasn’t changed among Republicans. In short, Republicans and Democrats are essentially tied. If this voter intent balance holds true, Democrats will hold a numerical advantage with the popular vote because there are more Americans identify as Democrats than Republicans nationally. Of course, this isn’t the case geographically, meaning that results at the state level could still vary. 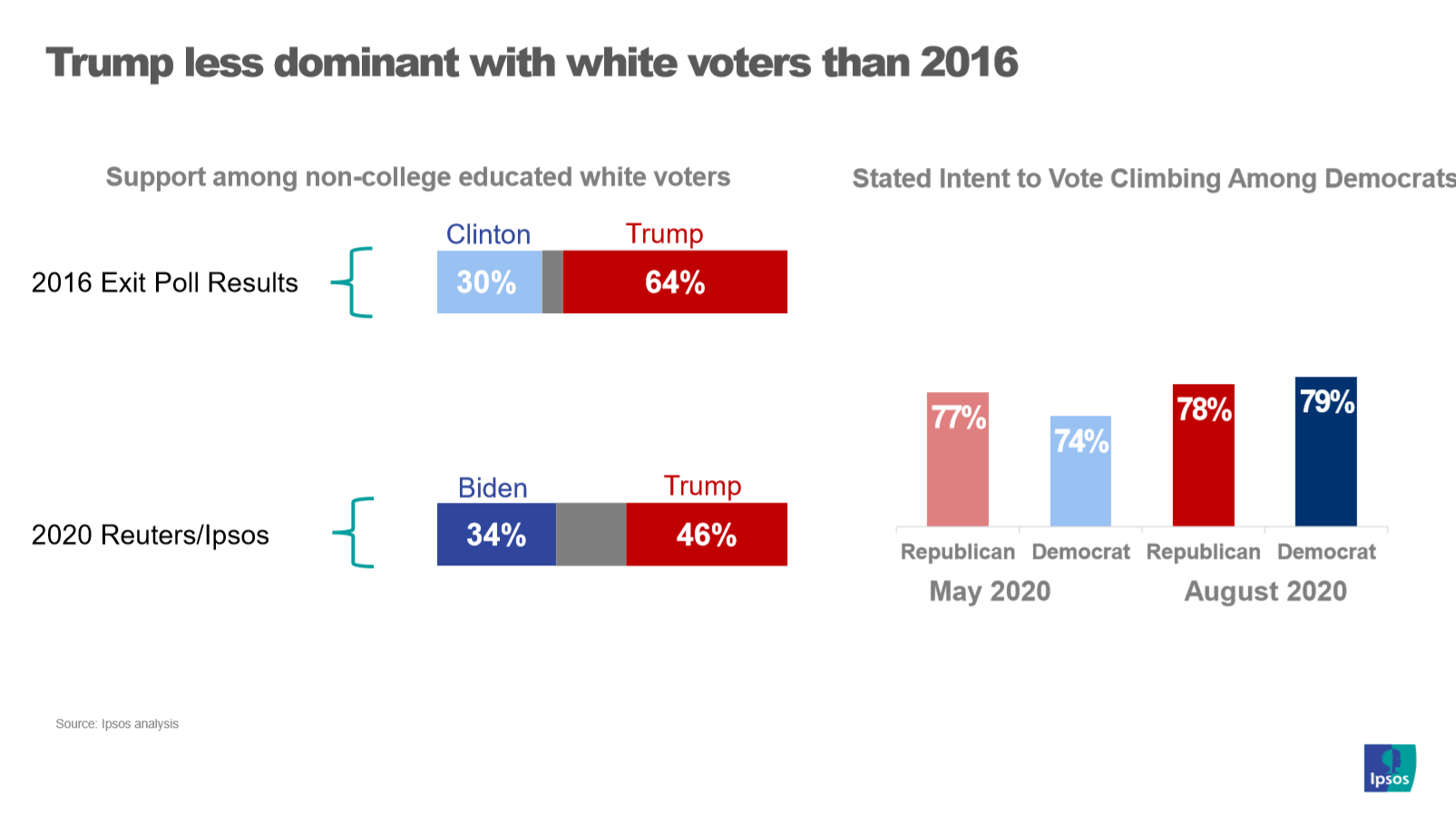 This final point brings us to the swing states, which will likely decide the outcome of the election, as they did in 2016. The three regions that will define the election are the upper Midwest, the Southwest and Southeast.

Here, the signals are more mixed. Polling indicates that Biden is doing well in the Upper Midwest, Trump fares better in the Southeast and the Southwest remains a tossup. However, Trump’s approval rating remains higher in many of these states relative to the national average, suggesting that he could still go on to win even in states where Biden is outperforming him in the polls.

In conclusion, when considered all these factors, Biden remains the slight favorite for now – but there is plenty of potential for the polls to shift. Ultimately, the election could go either way. 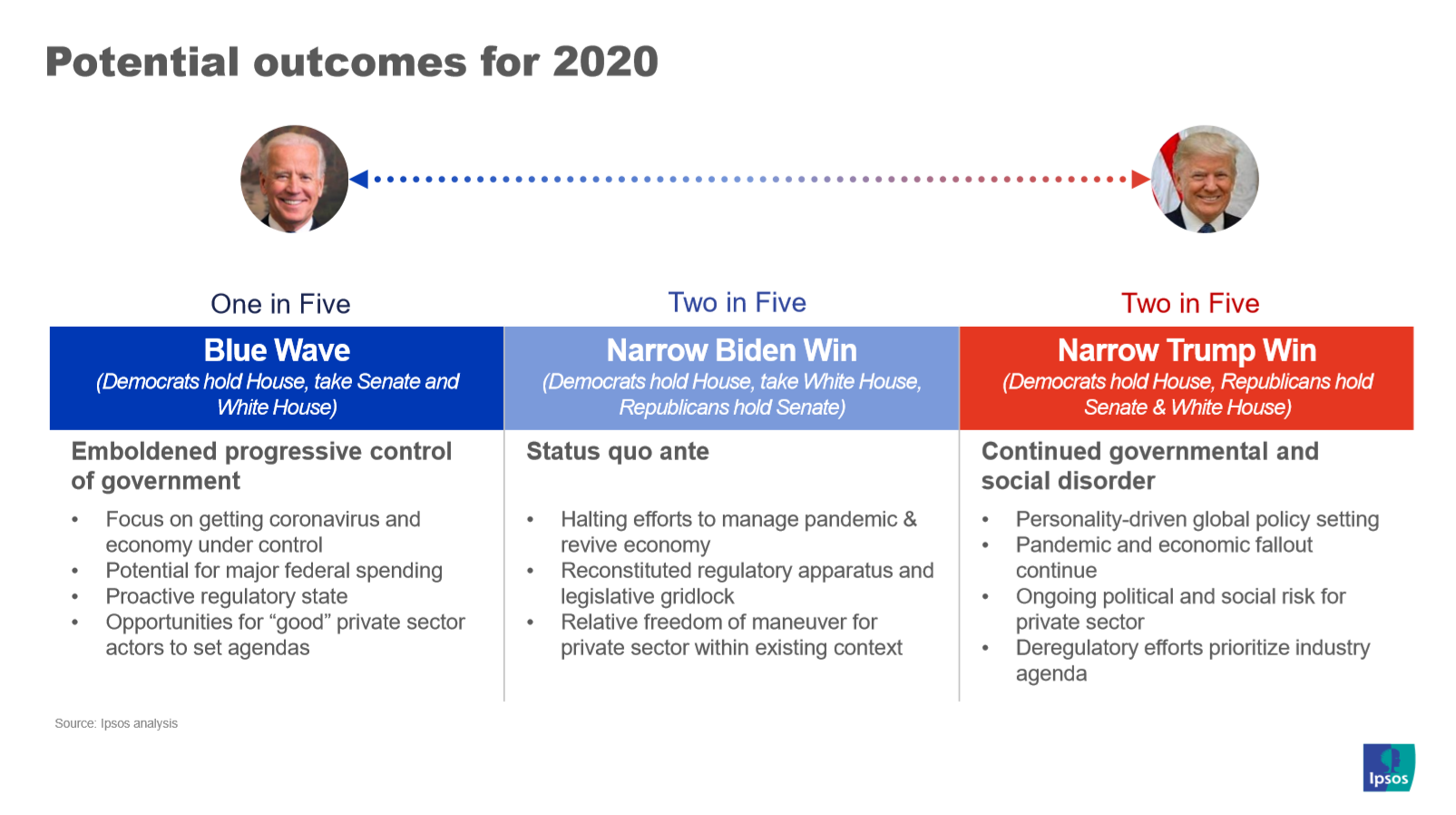 Our odds put the chances of a Trump or Biden victory at two in five both. A blue wave is less expected, with a one in five chance. Again, there are still many unknowns and the election is likely to be close. Beyond that, the final outcome is unlikely to be known in the immediate aftermath of November 3rd due to mail-in voting.