At this juncture, the nation has settled into two versions of reality around the coronavirus. According to one camp, the virus is overhyped and less threatening than the experts would have us believe. On the other side, Americans are bracing themselves for further deaths and ongoing community spread until a vaccine is developed. The gulf between these two camps shows few signs of closing the longer the pandemic endures.

Against this backdrop, trust in the institutions tasked with solving the crisis has fallen precipitously. As Axios reported last week, fewer than one in ten Americans trust the FDA to look out for their best interests, raising the question of whether enough Americans could be persuaded to take a vaccine should one be developed.

Reporting out today from the Axios-Ipsos Coronavirus Index underscores the degree to which trust in another key public health institution, the Centers for Disease Control (CDC), has fallen from the start of the pandemic. At the outset, a near majority of Americans held a “great deal” of trust in the institution. Now, just 15% of Republicans and 32% of Democrats say the same. Though a majority (65%) still have some degree of faith in the CDC, the nature of that trust has shifted from a “great deal” to a “fair amount.” 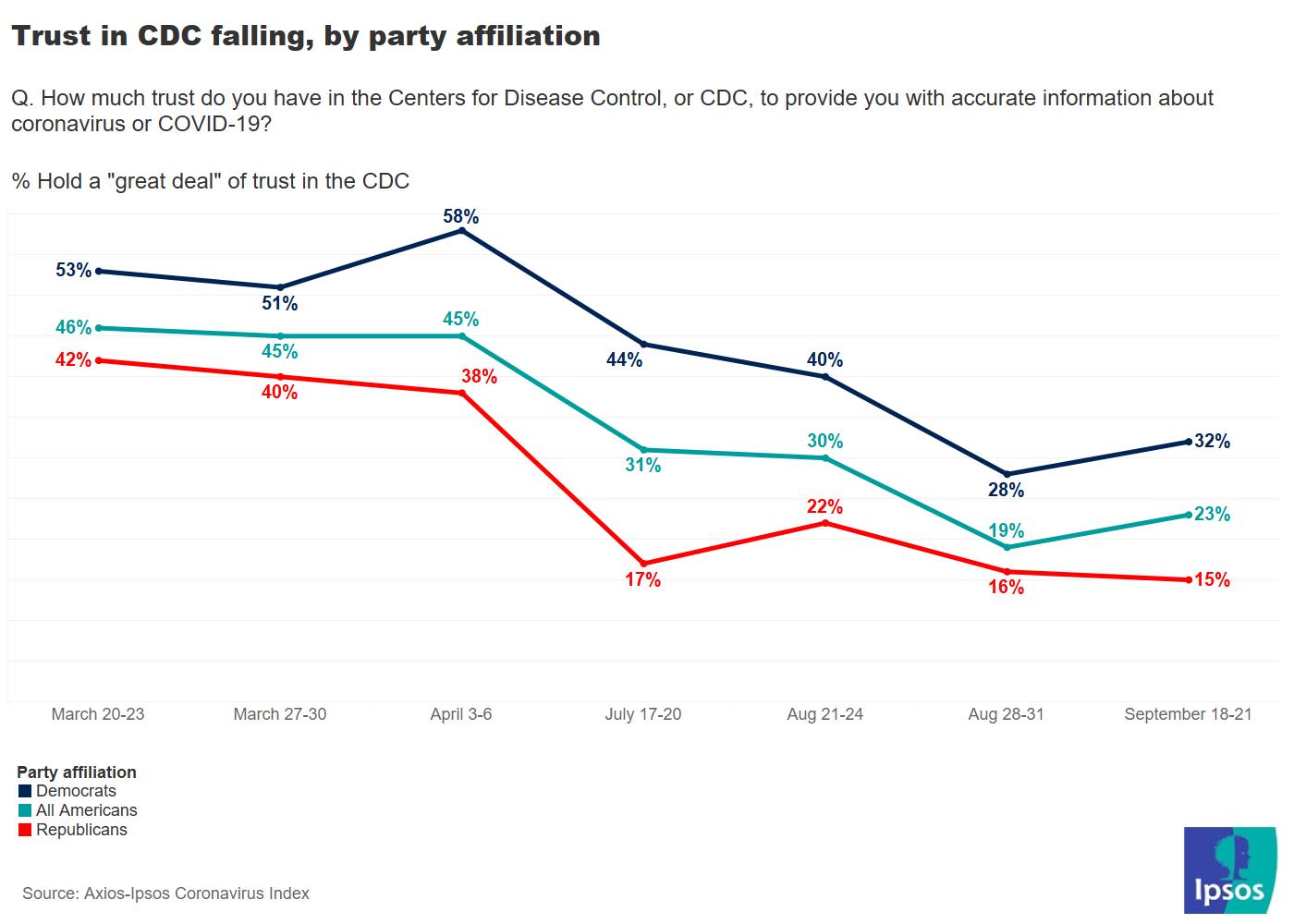 While party affiliation is often the most reliable indicator of views on the coronavirus and trust in the public health institutions, there are other factors at play, too. A polarized public is matched by an equally divided media landscape, in which misinformation has plenty of space to proliferate. Where Americans source their news is often a significant indicator of where they stand. Views on the virus in some cases neatly overlap by both partisanship and news consumption.

As just one example, Republicans and Democrats find themselves further apart on some central issues as we enter the fall. While 80% of Democrats are “extremely” or “very” concerned about the virus, 33% of Republicans feel the same way. Americans are similarly divided based on where they get most of their news, with FOX News viewers significantly less worried about the virus than those who look to sources like ABC, NBC, or the Washington Post. 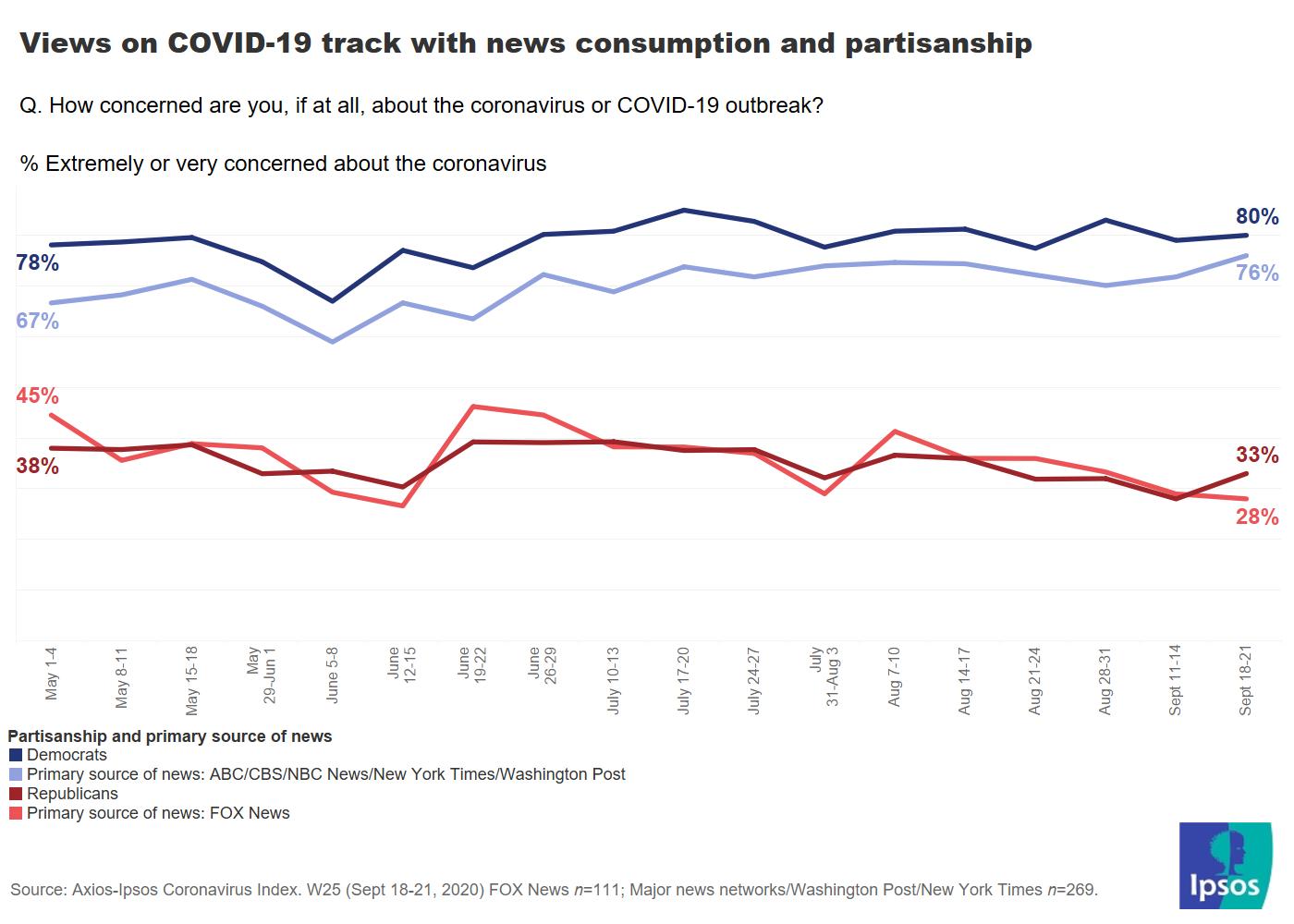 In this divided world, misconceptions about the virus have taken root. One of the more enduring parallel narratives centers around the “true” coronavirus death toll. Early on in the crisis, Democrats tended to see the official numbers as an undercount, while Republicans were more likely to believe they were an overcount.

Months later, misconceptions around the official death toll are still current. Posts claiming that the true number of deaths is just a fraction of the official count are still going viral and being retweeted by the president. And, partisan views on the subject remain sharply divided. Republicans are more likely to believe that the official statistics are inflated.

A similar pattern plays out by news consumption: 65% of FOX News viewers believe the official count is inflated, compared to just 7% of Americans who watch CNN or MSNBC. 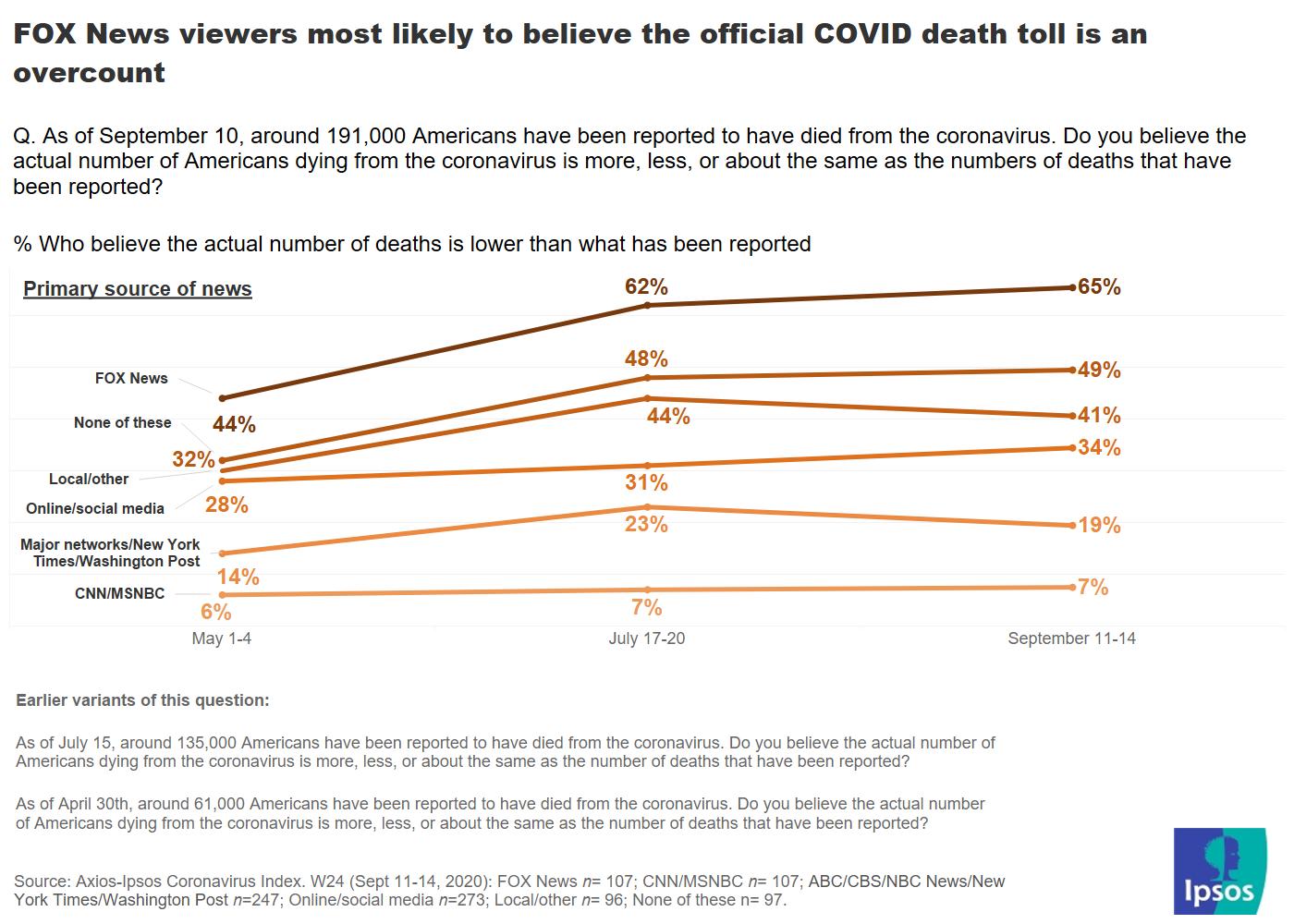 As seen above, FOX News viewers are not the only outliers. Americans who do not get their news from traditional news sources are also more prone to disbelieve the official statistics offered by public health experts and institutions like the CDC.

Similarly, views on a possible first generation coronavirus vaccine vary depending on where Americans source their news. Just over half of FOX News viewers (51%) say they are open to getting an early iteration of the coronavirus vaccine, in contrast with the 39% of all Americans who say the same. 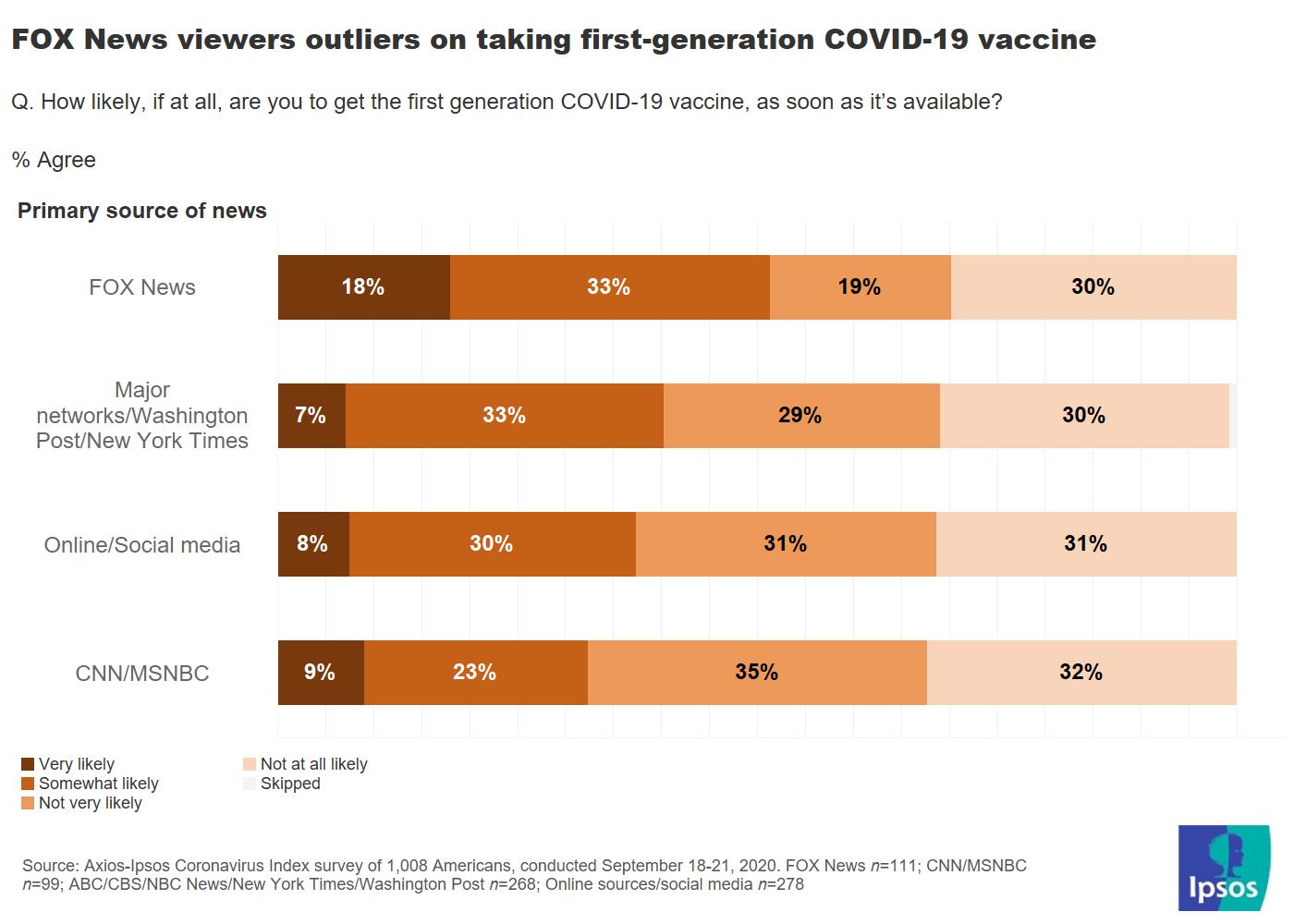 Like the debate around the official death count, vaccines too have become politicized as the White House pushes for an accelerated vaccine development schedule. As Clifford Young, president of Ipsos’ U.S. Public Affairs division, told Axios the political back and forth around the vaccine is likely creating a “negative sheen” around the science. And as seen in other key coronavirus flash points, the outliers, again, are FOX News viewers, who are 12 points more likely to say that they would try a first-generation vaccine than the average American.

Declining levels of trust in once politically agnostic institutions like the CDC and FDA - as well as growing doubts around a future vaccine - clearly outline the dangers of allowing politics to supersede science. But beyond this, it illustrates the dangers of our polarized media landscape.

In this environment, in which some see established facts as spurious at best, misinformation has free room to circulate and take on a life of its own. Though Americans might be seeing very different versions of the same set of facts on their newsfeeds, the end result is the same. Trust in core institutions is diminished and the prospect of rallying Americans to converge around a possible vaccine looks increasingly distant.