Washington, DC, July 12, 2021 — A new Ipsos poll finds that three quarters of Americans with some form of health insurance believe too many hurdles stand between patients and the medicines prescribed by their doctor, with nearly one in three patients having experienced utilization management restrictions on their prescription medicines, including formulary exclusions, prior authorizations, step edits, and high out-of-pocket costs.
52% of Americans with health insurance are concerned about how out-of-pocket costs may impact their ability to access prescription medicines while just under half report being concerned that the medicines they need are not covered by their insurance plan.
Overall, one in five adults covered by health insurance say that they failed to pick up a doctor-prescribed medication from the pharmacy in the past year. The two most common reasons for patients abandoning their prescriptions were an inability to afford out-of-pocket expenses (co-pays, deductibles, and coinsurance) and insurance plans not covering the medicine prescribed. Importantly, among those who did not fill a prescription, half said that their health suffered as a result, with one in four being prescribed more medication (26%) and/or ending up in the emergency room (23%).
Nine in ten (92%) Americans believe that doctors – not insurers – should make therapy decisions and 84% of those surveyed support the notion of having insurance policies for medicines evaluated for fairness by an independent, non-biased third party. 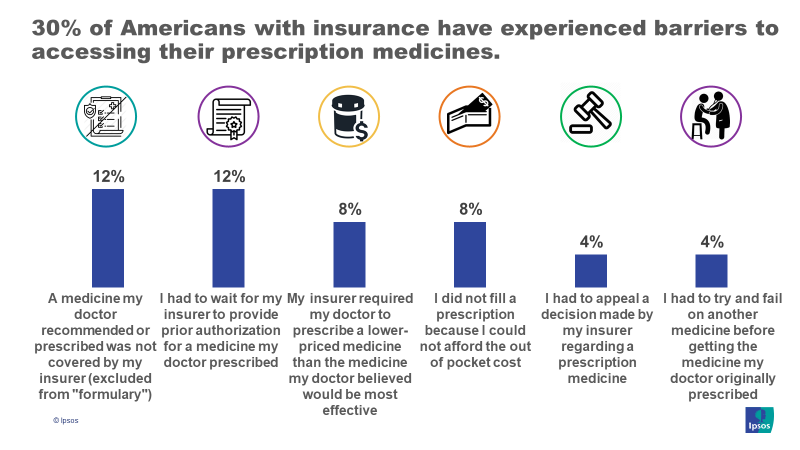 Three in ten have experienced issues accessing prescription medication in the past year – and this jumps to 45% among both parents with children at home and those between the ages of 18-34. 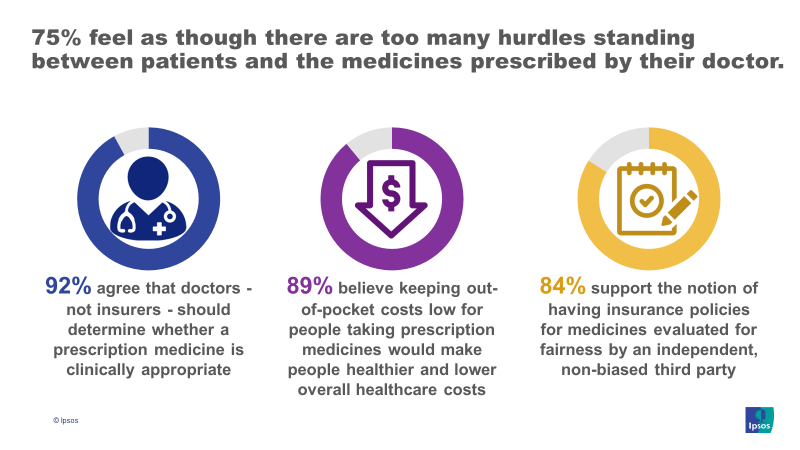 Three quarters of those with insurance coverage believe that too many hurdles stand between patients and the medicines prescribed by their doctor (75%). An even greater proportion agree that keeping out-of-pocket costs low for people taking prescription medicines would make people healthier and lower overall healthcare costs (89%).

There is consensus among Americans that doctors - not insurers - should determine whether or not a prescription medicine is clinically appropriate (92%). Among all surveyed, 84% support having insurance policies for medicines evaluated for fairness by an independent, non-biased third party. 72% also believe drug manufacturers and private insurance companies should negotiate prices based on assessments made by independent third parties. Older adults are significantly more likely to agree with both statements.

These are the findings from an Ipsos poll conducted May 11 - 13, 2021 on behalf of Novartis Pharmaceuticals Corporation and Reservoir Communications Group. For the survey, a sample of 1,122 adults ages 18 and over from the continental U.S., Alaska and Hawaii was interviewed online in English. To qualify for the survey, respondents had to be covered by some form of health insurance.
The sample for this study was randomly drawn from Ipsos’ online panel (see link for more info on “Access Panels and Recruitment”), partner online panel sources, and “river” sampling (see link for more info on the Ipsos “Ampario Overview” sample method) and does not rely on a population frame in the traditional sense. Ipsos uses fixed sample targets, unique to each study, in drawing a sample. After a sample has been obtained from the Ipsos panel, Ipsos calibrates respondent characteristics to be representative of the U.S. Population using standard procedures such as raking-ratio adjustments. The source of these population targets is U.S. Census 2018 American Community Survey data. The sample drawn for this study reflects fixed sample targets on demographics. Posthoc weights were made to the population characteristics on gender, age, race/ethnicity, region, and education.

Statistical margins of error are not applicable to online non-probability polls. All sample surveys and polls may be subject to other sources of error, including, but not limited to coverage error and measurement error. Where figures do not sum to 100, this is due to the effects of rounding. The precision of Ipsos online polls is measured using a credibility interval. In this case, the poll has a credibility interval of plus or minus 3.3 percentage points for all respondents. Ipsos calculates a design effect (DEFF) for each study based on the variation of the weights, following the formula of Kish (1965). This study had a credibility interval adjusted for design effect of the following (n=1,122, DEFF=1.5, adjusted Confidence Interval =  +/-4.8 percentage points for all respondents).