As the impeachment process rolls on through the House of Representatives, polls find that most Americans’ views on the matter remain largely unchanged. Public opinion on impeaching and removing President Trump has been holding steady since early November, with approximately 47% of Americans in support of impeachment and 44% opposed. Given how fixed Americans’ views on the matter seem to be at this point raises the question of what it would take to shift public opinion one way or the other.

Media diet is one possibility.

Media outfits have a hand in shaping public perception and moving public opinion. As numerous other polls have shown, Americans’ opinions tend to sharply diverge depending on which news channel they tune into.

Breaking down public opinion from a FiveThirtyEight/Ipsos impeachment poll by the news channel respondents watch the most, this interplay between news outlets and public opinion is on full display.

We can see clearly that the majority of MSNBC, CNN and Fox News viewers are very confident about their opinions of the impeachment process. Clearly, these three channels have an outsize impact on public opinion relative to other channels, or are drawing in viewers seeking confirmation of their own strong views – or both.

The dissonance lies in the fact that Fox News viewers tend to hold differing views from all other news channel viewers, raising questions about the different information people are getting. As Kellyanne Conway once so memorably put it, Americans now find themselves living in a world of “alternative facts,” with different camps holding diametrically opposed views on the same topics. 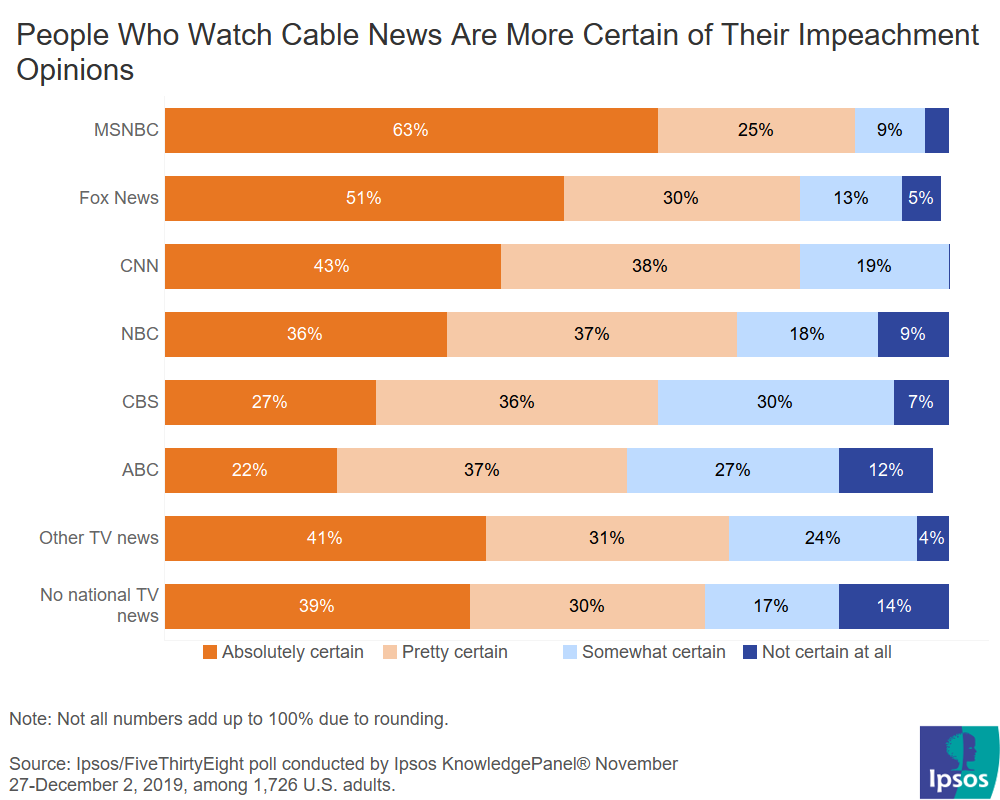 Similarly, Fox News viewers diverge from the rest of the pack when asked how the hearings had influenced them. 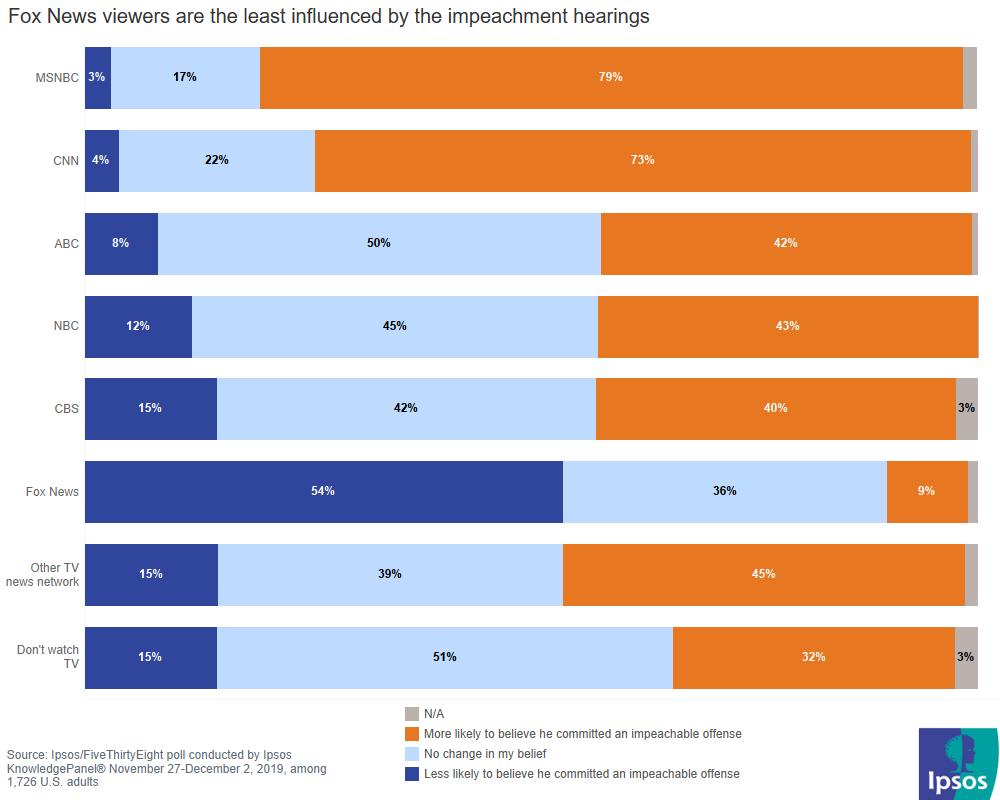 Diving into a comparison between Fox News, and CNN and MSNBC, we continue to see a sharp divide in understanding of reality and the basic facts.

For instance, the vast majority of Fox News viewers do not subscribe to the belief that Trump and his administration attempted to cover up their actions in Ukraine and that Trump withheld military aid from Ukraine. Nearly 9 in 10 CNN and MSNBC viewers believe that he did. 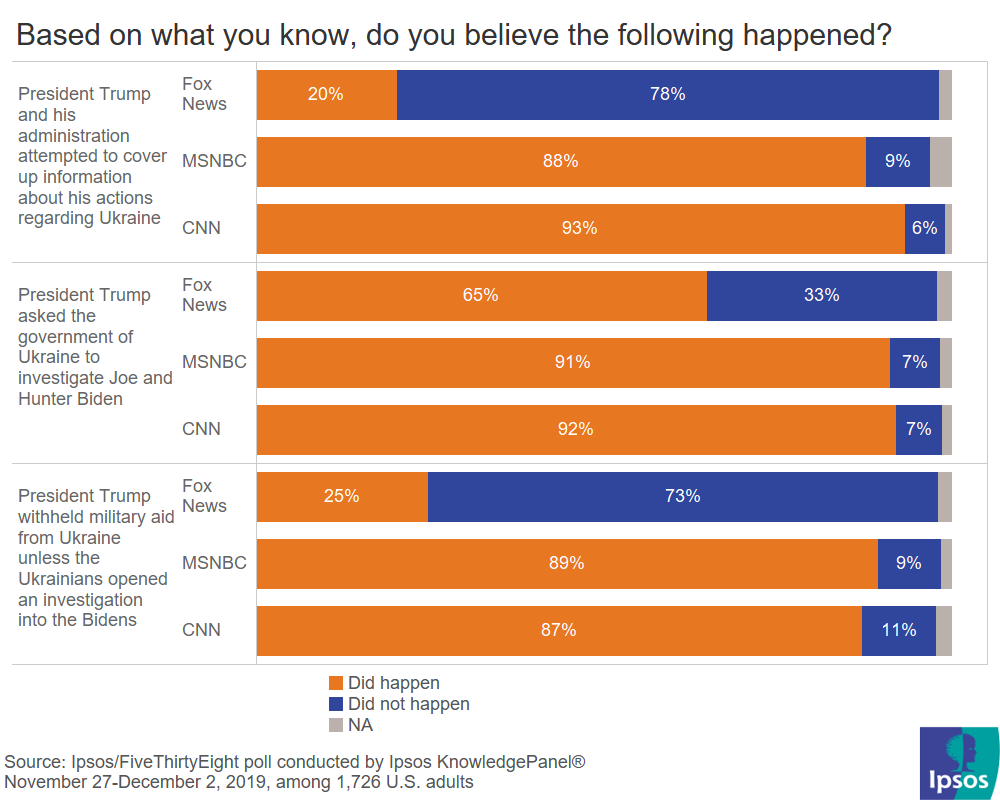 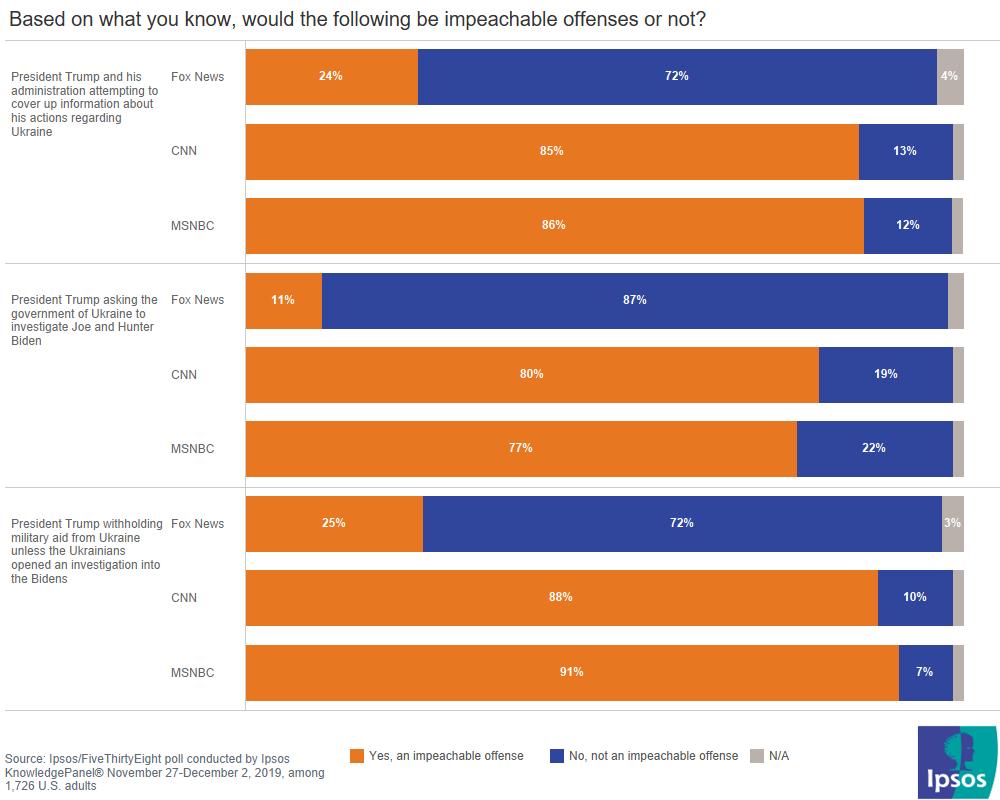 In short, the channels Americans get their news from (particularly Fox, CNN and MSNBC) tend to reinforce their own views and their perceptions of the political reality we inhabit today. Going forward, FiveThirtyEight/Ipsos will continue to track how (and if) public opinion shifts along with new developments in the impeachment inquiry via a Ipsos KnowledgePanel ®.