New York, NY, October 18, 2021 — A new 28-country Ipsos survey conducted in collaboration with the Global Infrastructure Investor Association finds Americans are among those least satisfied with their country’s infrastructure. Americans are also more likely than citizens from most other countries to prioritize economic infrastructure (e.g. transportation networks, utilities, and communications) over social infrastructure projects (e.g., school and hospital buildings and housing). Among 14 areas, those most widely perceived in the U.S. to be infrastructure investment priorities are water supply and sewage, local roads, highways, and solar energy.

The survey finds only 27% of U.S. adults saying they are satisfied with their country’s infrastructure, compared with an average of 39% across the 28 countries surveyed and 37% across all G8 countries. 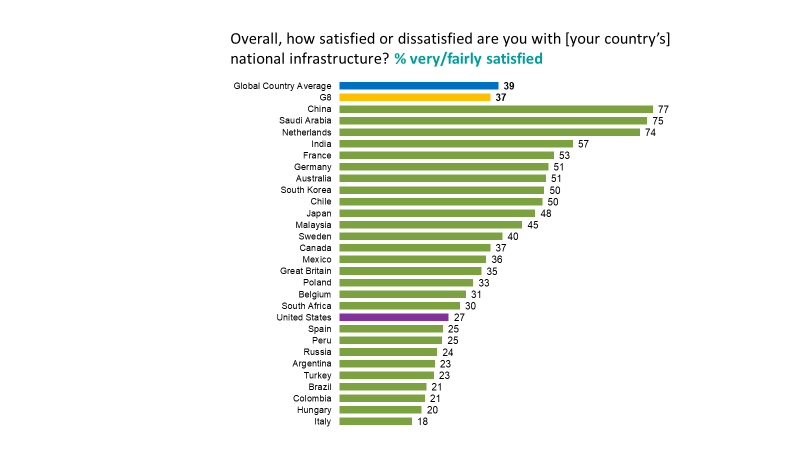 Satisfaction with U.S. infrastructure is now at its lowest in the past five years. Three in five Americans (61%) agree that “as a country, we are not doing enough to meet our infrastructure needs.”

In the lead-up to COP26, the 2021 UN Climate Change Conference, the survey finds an average of 51% across the 28 countries feeling that, when making decisions on how to improve infrastructure, considerations about their impact on the environment should be given a higher priority than considerations about their impact on the economy, nearly double the 26% who put greater weight on their economic impact. However, the U.S. is split almost evenly with 37% prioritizing the environment vs. 34% prioritizing the economy.

Globally, the environment leads seven factors in terms of their importance when planning infrastructure for the future: on average across all 28 countries, 26% rank the environment as the single most important factor, slightly ahead of the quality of infrastructure, chosen by 23%. In the U.S., quality comes first (chosen by 30%), followed by the environment (23%). Ownership, i.e., whether the infrastructure is owned by the public sector or private businesses, is the factor most commonly ranked last, both globally (24%) and in the U.S. (28%).

Majorities of citizens surveyed in all 28 countries agree that investing in infrastructure will create new jobs and boost the economy: 75% on average globally and 70% both on average across G8 countries and in the U.S.

Americans’ preference for economic infrastructure is reflected in their views about where investment should be prioritized. Among 14 areas, the top five choices in the U.S. are:

Utilities (water, electricity), road network, and airports are more likely to be selected as priorities in the U.S. than they are on average both globally (i.e., in the 28 countries surveyed) and all G8 countries:

On the other hand, Americans are especially less likely than others to prioritize: 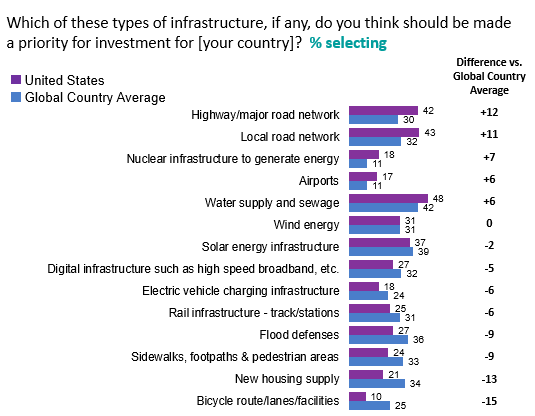 The samples in Brazil, China, Chile, Colombia, India, Malaysia, Mexico, Peru, Russia, Saudi Arabia, South Africa, and Turkey are more urban, more educated, and/or more affluent than the general population. Results should be viewed as reflecting the views of the more “connected” segment of their population.

The Global Country Average reflects the average result for all the countries where the survey was conducted. It has not been adjusted to the population size of each country and is not intended to suggest a total result.

Ipsos is the world's third-largest Insights and Analytics company, present in 90 markets and employing more than 18,000 people.

Our passionately curious research professionals, analysts, and scientists have built unique multi-specialist capabilities that provide true understanding and powerful insights into the actions, opinions, and motivations of citizens, consumers, patients, customers, or employees. We serve more than 5000 clients across the world with 75 business solutions.