New York, NY, October 25, 2021 — Ipsos’ Global Health Service Monitor 2021 finds the same level of concern for COVID-19 in the United States as on average across 30 countries surveyed. COVID ranks as the public’s top health concern in 27 of the 30 countries, including the U.S. Seven in 10 adults on average globally (70%) and in the U.S. (68%) consider COVID to be one of the biggest problems facing their countries today. The survey finds that Americans tend to be more concerned about mental health and drug abuse, and less concerned about cancer, stress, diabetes, and smoking than are people in other countries.

The new Global Health Service Monitor also highlights that Americans are significantly more likely than other people to view healthcare in their country as too costly (52% vs. a 30-country average of 31%) and good health as unaffordable for many people in their country (67% vs. 58%). Americans are also less likely to believe their healthcare system provides the same standard of care to everyone (27% vs. 39%).

Overall, Americans are more likely than average to rate the quality of the healthcare they have access to positively: 67% say it’s “very good” or “good” vs. a 30-country average of 53%. However, satisfaction in the U.S. is down 4 percentage points from last year. The survey finds the highest levels of healthcare satisfaction in Singapore (where 79% rate the quality of the care they can access as very good or good), Switzerland (78%), Australia (78%), and the Netherlands (77%).

Americans are more concerned about mental health and drug abuse

Besides COVID-19, the health concerns Americans most widely perceive as the biggest ones facing their country today are mental health (cited by 35%), cancer (22%), drug abuse (20%), and obesity (20%).

The proportions of Americans who consider mental health and drug abuse among their country’s top health problems are higher (by 4 and 7 percentage points, respectively) than those seen on average globally. In reverse, Americans are less likely to cite cancer (by 12 points), stress (9 points), diabetes (5 points), and smoking (4 points). 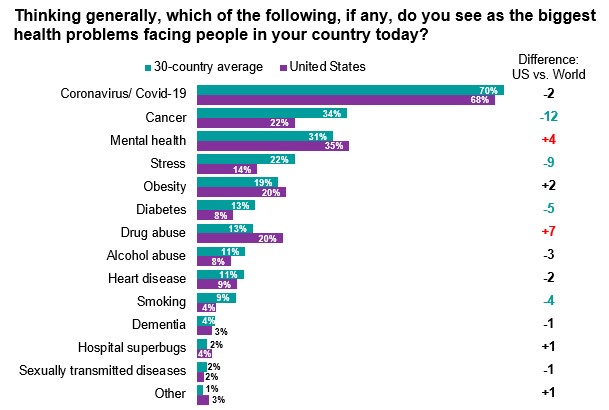 Satisfaction with the quality of healthcare in the U.S. is down from last year 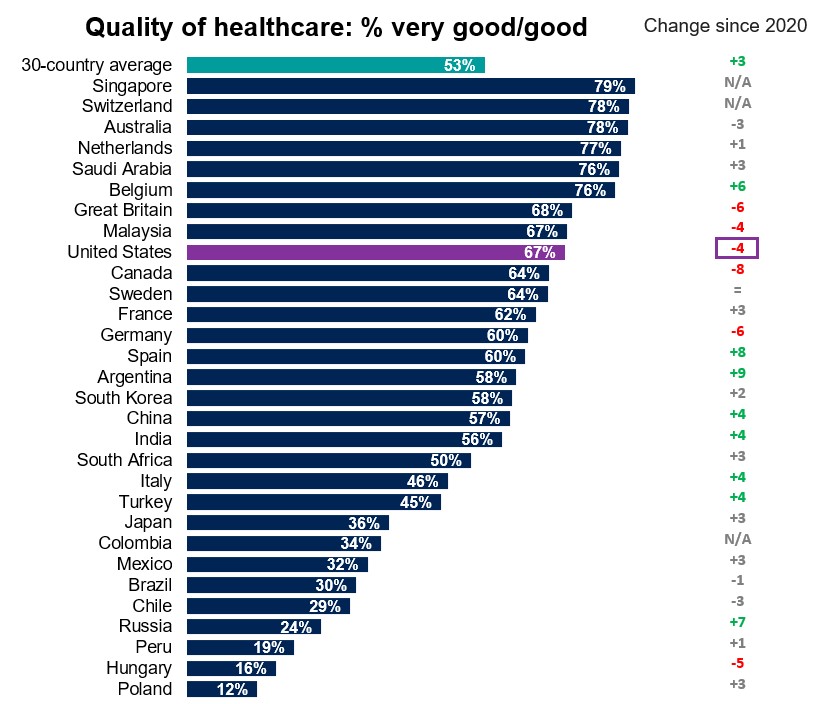 The U.S. stands out on the cost of accessing treatment

The cost of accessing treatment (cited by 52%) ranks as the number one problem with the healthcare system in the U.S., while it is only the third most important problem globally (average of 31%). Among all countries surveyed, the U.S. trails only Chile (58%) in the percentage of its citizens citing the cost of treatment among their healthcare system’s top problems.

Bureaucracy (30%) ranks as the second most important problem with the healthcare system in the U.S., while it is fourth worldwide (26%). 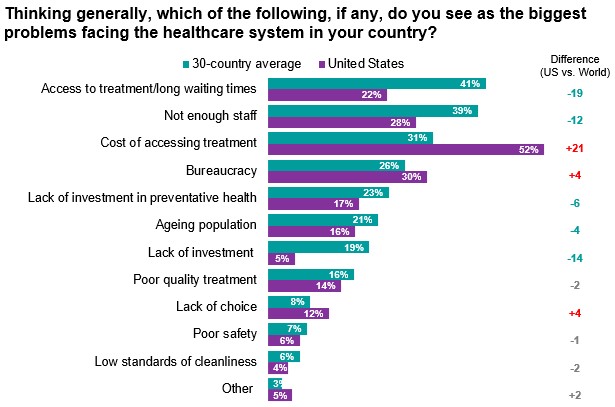 Sixty-seven percent of those in the U.S. agree that good health is unaffordable for many people in their country. This is 9 points higher than the global average of 58%. Only one-quarter (27%) of Americans believe that the U.S. healthcare system provides the same standard of care to everyone, well below the global average of 39%.

In contrast, long wait times and not enough staff are the two systemic problems globally, but not in the U.S. Less than one-quarter of Americans (22%) cite long wait times as the main problem in the U.S. health system, vs. an average of 41% across the 30 countries surveyed – a difference of 19 points. And while 28% in the U.S. view the lack of sufficient staff as a top problem, 39% on average globally do – a difference of 11 points. Nevertheless, Americans are just as likely to say the healthcare system is overstretched as those in other countries: 55% of in the U.S. and 56% on average globally say the healthcare system is overstretched.

Americans' concern over personal data being made available to third parties without consent is also on par with the worldwide average (56%). 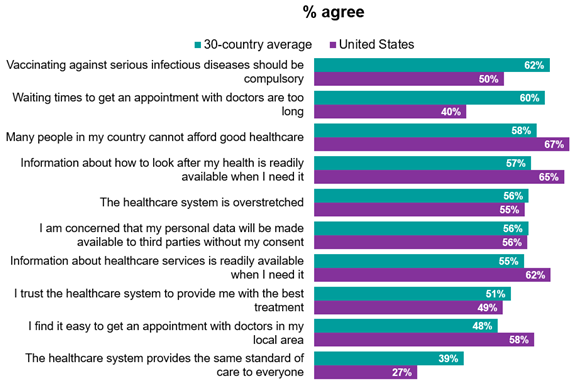 These are the findings of an Ipsos online survey conducted between August 20 and September 3, 2021.

The samples in Argentina, Australia, Belgium, Canada, France, Germany, Great Britain, Hungary, Italy, Japan, the Netherlands, Poland, South Korea, Spain, Sweden, Switzerland, and the United States can be taken as representative of their general adult population under the age of 75. The samples in other countries (Brazil, China, Chile, Colombia, India, Israel, Malaysia, Mexico, Peru, Russia, Saudi Arabia, Singapore, South Africa, and Turkey) produce a national sample that is more urban and educated, and with higher incomes than their fellow citizens. The survey results for these countries should be viewed as reflecting the views of the more "connected" segment of their population.

The "Global Country Average" reflects the average result for all countries and markets where the survey was conducted. It has not been adjusted to the population size of each country and is not intended to suggest a total result.

Where results do not sum to 100 or the difference appears to be plus or minus one point more or less than the actual, this may be due to rounding, multiple responses, or the exclusion of "don't know" or not stated responses.