Washington, DC, November 18, 2019 — Germany retains the top position in the 2019 Anholt-Ipsos Nation Brands Index (NBI) for the third time in a row. However, this year is marked by a noticeable shake-up among leaders in NBI rankings. France jumped from fourth to second place, and Canada advances from fifth to third place. The United Kingdom, which ranked third every year since 2011, drops to the fourth spot. Japan, came in second in 2018, but now sits in the fifth position. The United States remains in sixth place. While Italy tied with the U.S. in 2018, it now ranks seventh. 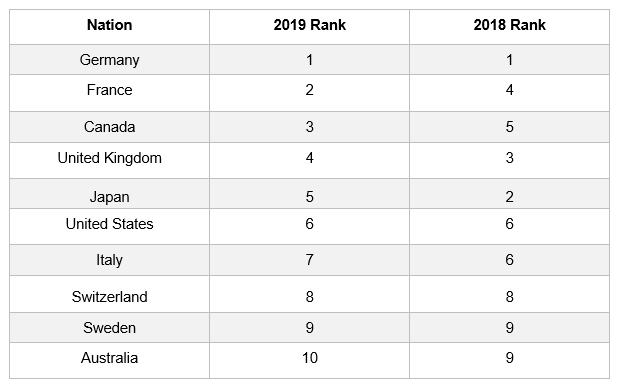 Germany again ranks #1 out of 50 nations, marking the fifth time Germany tops the NBI list. Germany was the highest-ranked NBI nation in 2008, 2014, 2017, and 2018. Germany’s leading advantage is its consistent strengths across multiple reputational categories: Exports, Culture, Immigration/Investment, and Governance. Global citizens have positive feelings about buying German products and the employability of the German people, putting Germany first in both categories for 2019. Citizens from China have the highest opinion of Germany’s Exports, Governance, People, and Immigration/Investments.

Image of the U.S. stabilizes

NBI 2019 is the fourth time since 2008 that France has come in second place. Top marks for the country’s Culture and Tourism, and improved perceptions of its Governance helped secure France’s high ranking this year. For over a decade, France has consistently placed at the top of the NBI, hovering around fourth place for the past five years.

The United Kingdom slips in the ranking

Global attitudes toward the United Kingdom remain strongly positive overall, despite dropping from third to fourth place in 2019. The United Kingdom’s robust reputation stems from a top-5 ranking on most Indices: Exports, Culture, Tourism, as well as Immigration and Investment. Perceptions of its People and Governance are relative reputational weaknesses for the United Kingdom.

Nations that normally are in the second tier of the NBI rankings (position 11 - 20) enjoyed some of the largest reputational gains this year. Finland gained the most year-over-year, driven by the rising global opinion of its Culture and Governance. Top NBI ranks for Finland come from citizens of nearby and neighboring countries such as Germany, Sweden, and Russia. New Zealand enjoys the second-largest improvement in perceptions, spurred by the growing positive opinion of its Governance and Culture. Norway sees more positive feelings towards its Culture, as well as its Immigration and Investment.

All African nations measured in 2018 and 2019 have medium-to-strong reputational gains. Egypt leads the pack, followed by South Africa, Nigeria, and Kenya. The Immigration and Investment index is the biggest contributor to the rising public opinion of Egypt and Kenya. Conversely, reputational surges in South Africa and Nigeria are due to improved perception of their People. African countries are enjoying an uptick in positive sentiments from citizens of India, China, Italy, and Turkey. This is the third consecutive year where Egypt, Kenya, and Nigeria see improvements in their public opinion, while South Africa is going into its second year of growth.

Global citizens feel especially good about buying products from Germany, the U.S., and Japan. The country of origin effect, which is part of the Exports index, evaluates how people feel about purchasing products from NBI-studied countries.

Nations are sometimes compared to different types of personalities. In NBI 2019, global citizens were asked to select up to three personality traits to describe each nation. Global citizens view Switzerland as the most trustworthy (32%), New Zealand as the friendliest (40%) and happiest (32%), Japan as the most creative (36%), Brazil and Spain as the most fun (31%), and Germany as the strongest (39%).

Influence of media content on perception of nation brands

On average, one in five global citizens have visited a website with content related to an NBI-measured nation. Digital properties in the United States (42%), the United Kingdom (34%), and France (31%) are the most frequently visited. Global citizens exposed to media content about the United Kingdom and France reported improved overall opinion towards these nations, while those interacting with media from the United States reported a diminished opinion of the country.

Protecting the environment is the top global concern

Nearly four in ten global citizens believe protecting the environment is the biggest global concern (38%). Ensuring the safety of food and water is the second most concerning issue (28%), and resolving violent conflicts is a close third (27%).

For the Anholt-Ipsos Nation Brands Index (NBI), we conducted 20,035 interviews online in 20 panel countries with adults aged 18 or over. Data are weighted to reflect key demographic characteristics including age, gender, and education of the 2019 online population in that country. Additionally, race/ethnicity has been used for sample balancing in the U.S., UK, South Africa, India, and Brazil. Fieldwork was conducted from July 15 through August 29, 2019.

The 50 nations measured by the survey are as follows, listed by region:

Ipsos is the third largest market research company in the world, present in 90 markets and employing more than 18,000 people.

Our passionately curious research professionals, analysts and scientists have built unique multi-specialist capabilities that provide true understanding and powerful insights into the actions, opinions and motivations of citizens, consumers, patients, customers or employees. Our 75 business solutions are based on primary data coming from our surveys, social media monitoring, and qualitative or observational techniques.

“Game Changers” –our tagline –summarises our ambition to help our 5,000 clients navigate with confidence our world of rapid change.

For the Anholt-Ipsos Nation Brands Index (NBI), we conducted 20,035 interviews online in 20 panel countries with adults aged 18 or over. Data are weighted to reflect key demographic characteristics including age, gender, and education of the 2019 online population in that country. Additionally, race/ethnicity has been used for sample balancing in the U.S., UK, South Africa, India, and Brazil. Fieldwork was conducted from July 15 through August 29, 2019. Click here to view an example of how Northern Ireland, an NBI subscriber, utilizes our place branding data.