In interviews conducted March 11-12, new survey data from ABC News and Ipsos finds that a majority of Americans (77%) support banning Russian oil imports even if it means higher gas prices in the U.S. This is in line with other survey research showing more than three-fourths supporting a ban, even as gas prices have climbed more than 50 cents per gallon over the last week. Public sentiment around President Joe Biden’s handling of the situation with Russia and Ukraine has improved over the last two months. However, a large majority of Americans continue to disapprove of the President’s handling of inflation and gas prices. 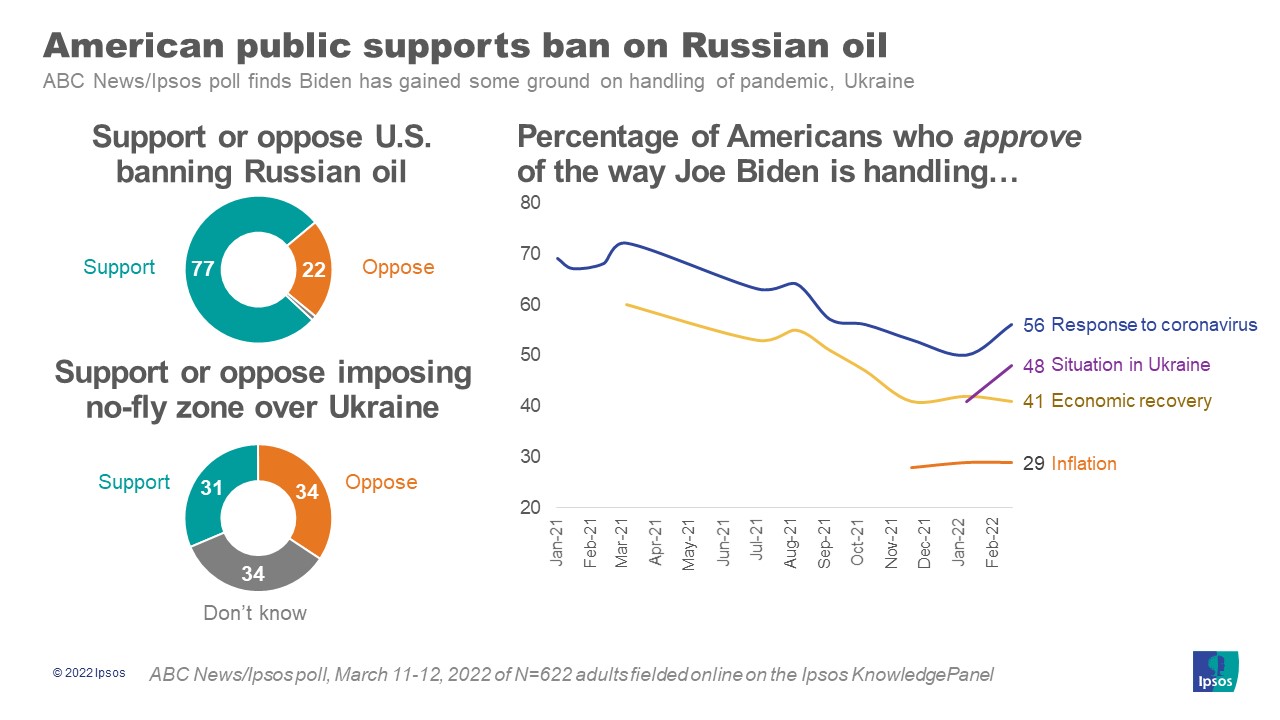 This ABC News/Ipsos poll was conducted March 11 to March 12, 2022 by Ipsos using the probability-based KnowledgePanel®. This poll is based on a nationally representative probability sample of 622 adults age 18 or older, with an oversample among LGBTQ+ respondents.

The study was conducted in both English and Spanish. The LGBTQ+ data were weighted to adjust for Gender (Male, Female) by Age (18-44, 45+), Race/Ethnicity (White non-Hispanic, All other), Education (Some college or less, Bachelor and beyond), Metropolitan status (Metro, Non-Metro), Household income (Under $100,000, $100,000 and over).  Using the LGBTQ+ weight as the starting weight, the data were weighted to adjust for Gender by Age, Race/Ethnicity, Education, Census region, Metropolitan status, Household income, Party Identification, and LGBTQ+ identity. The demographic benchmarks came from the 2021 Current Population Survey (CPS) from the US Census Bureau.  LGBTQ+ identity benchmarks came from the KnowledgePanel Profile data.  Party ID benchmarks came from recent ABC News/Washington Post telephone polls. The weighting categories were as follows: