Washington, DC, July 30, 2020 — The latest Ipsos What Worries the World study shows that Americans say the country is off on the wrong track, at levels not seen since 2014. This rising frustration is also seen globally. Coronavirus/COVID-19 continues to hold as the top concern both globally and in the U.S.

Seventy-two percent of Americans now believe the country is off on the wrong track, up seven points from June. Just 28% think the country is heading in the right direction. 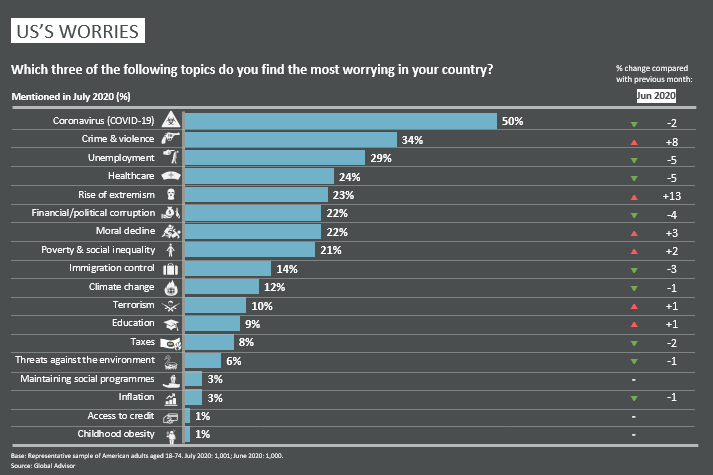 Among the 27 countries surveyed, coronavirus/COVID-19 is mentioned as the single top concern in 11 countries. This marks a drop from the June and April surveys, which saw Coronavirus/COVID-19 listed as the single top concern in 13 and 25 of the 27 countries, respectively. Concern over COVID-19 is currently highest in Chile (61%), India (61%), Peru (60%), and Saudi Arabia (60%). 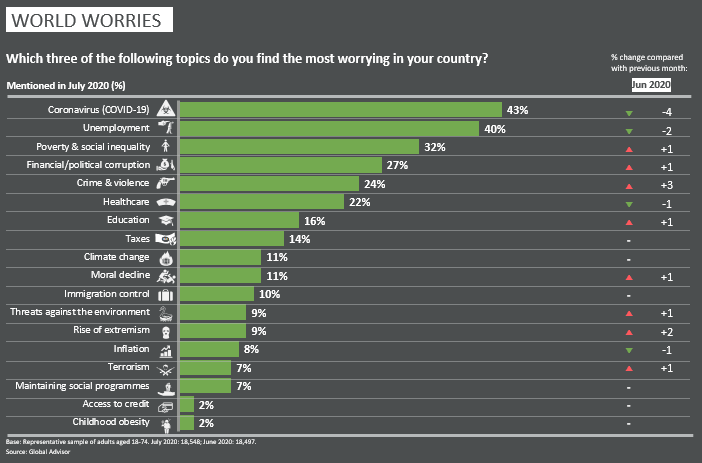 Brazil, Chile, India, Malaysia, Mexico, Russia, Peru, Saudi Arabia, South Africa, and Turkey have lower levels of internet penetration and so these samples should not be considered nationally representative, and instead be considered to represent a more affluent, connected population. These are still a vital social group to understand in these countries, representing an important and emerging middle class.