One of the lesser-publicized parts of President Joe Biden’s stimulus package earlier this year was a major change in the way parents receive tax credits for their children: A big bump in the overall tax benefit, with half sent out via up-front payments once a month. From July through December, 2021, parents get $300 for each kid younger than 6; from 6 to 17, $250.

For parents, the new distribution of Child Tax Credit payments is essentially a mini-stimulus check every month through the end of the year. New data from the Ipsos Coronavirus Consumer Tracker shows that 71% of families with children under 18 in their household were familiar with the payments – resulting in a nice surprise in their bank accounts or in the mail for those who weren’t aware.

So what are people doing with the money?

These numbers are almost identical to how Americans said they were spending their first round of stimulus payments in April 2020, according to data from the Axios-Ipsos Coronavirus Index. 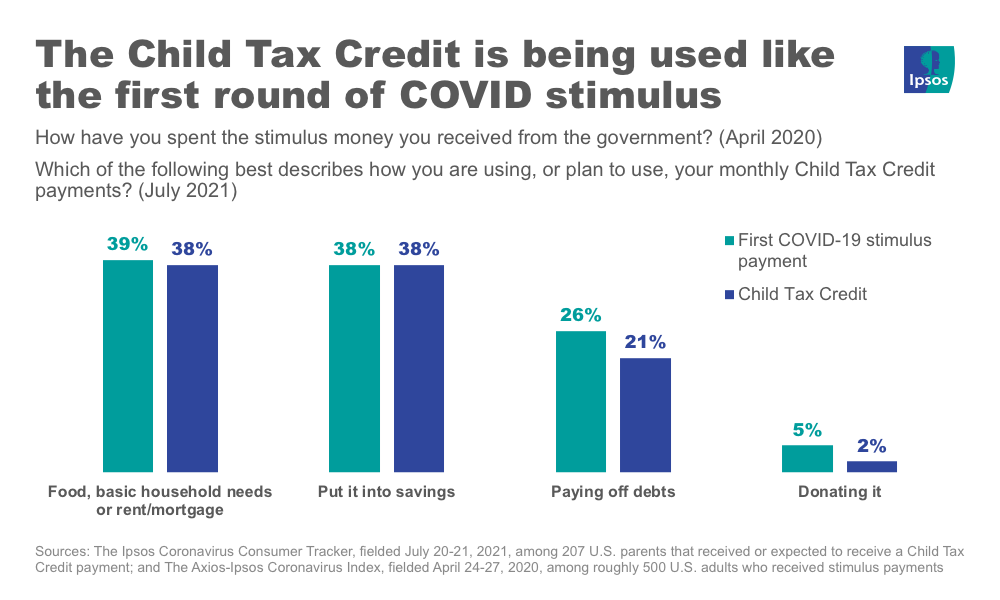 “The fact that American families are using these payments the same way the first batch of stimulus was used early in the pandemic, when shockwaves were rocketing through the economy, shows that this is support as needed as ever,” said Mallory Newall, research director with Ipsos Public Affairs.

But one of the widely touted benefits of the Child Tax Credit plan is that, by nature of the fact that the checks are being distributed throughout the year – and the way that the tax credit is calculated – they’ll do a much better job of fighting child poverty.

Though the demographic sample size is small, Ipsos data shows there’s some truth to that argument. Families making less than $50,000 a year are among the most likely to use Child Tax Credit payments to stay afloat, applying it to basic household needs, like rent/mortgage or food – far more likely than families making more than $100,000 a year.

“The Biden administration has touted these expanded tax credits as a way to fight child poverty,” Newall said, “and our data paints a pretty clear picture that the money may be helping do just that.”