It is looking increasingly likely that the U.S. House of Representatives will vote to impeach President Trump. Recently, reports indicate that the Democratic-controlled House will narrowly focus articles of impeachment on abuse of power related to the Ukraine scandal.

However, the ultimate fate of impeachment will rest in the Republican-controlled Senate which requires a two-thirds majority before Trump would be removed from office. Assuming the 47 Democrats and Democrat aligned independents vote to impeach, the motion would require at least 20 Republican votes to pass.

For the foreseeable future, we will be treated to an ongoing stream of “insider” or “background” reporting about which Republican senators might be willing to buck the president, but that is all noise. The real key to whether Republican senators will vote against Trump is their perceptions of his electoral strength and public support.

The key in shaping their perceptions: Through public opinion data on Trump’s job approval numbers.

Trump’s numbers have remained remarkably stable over the last year with about 40% of the public expressing approval of his job performance. Both our own Reuters/Ipsos polling as well as FiveThirtyEight’s poll average put the president’s numbers at between 40 and 42 points (FiveThirtyEight).

Well, having an approval rating of 40% is not the worst in history. Indeed, Trump’s numbers are comparable to Obama’s at a similar point in his presidency. In this highly polarized time, having the support of less than half the public appears to be something of the new normal. 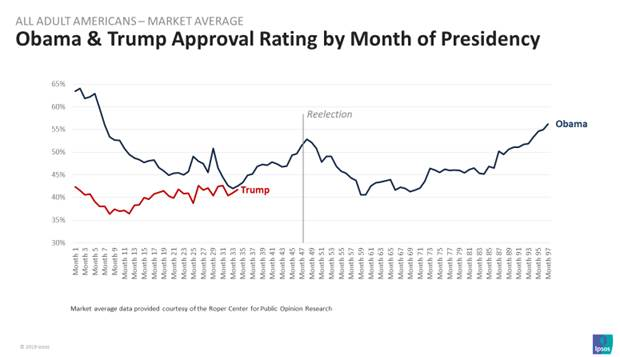 Additionally, in a global context, we see that the low 40’s is a much more common place to be today than 10 years ago.  Again, a sign of our highly tribal, divided world.

Thinking of the election, public support in the 40% range puts Trump in a reasonable, if not absolute, position. On electability, our Ipsos models suggest that a sitting president, like Trump, has a good chance of winning in the next election. As I often say, a sitting president at or above a 40% approval rating has a better than 50/50 chance of winning. Last year, we had Trump at about the same odds (Daily Beast). 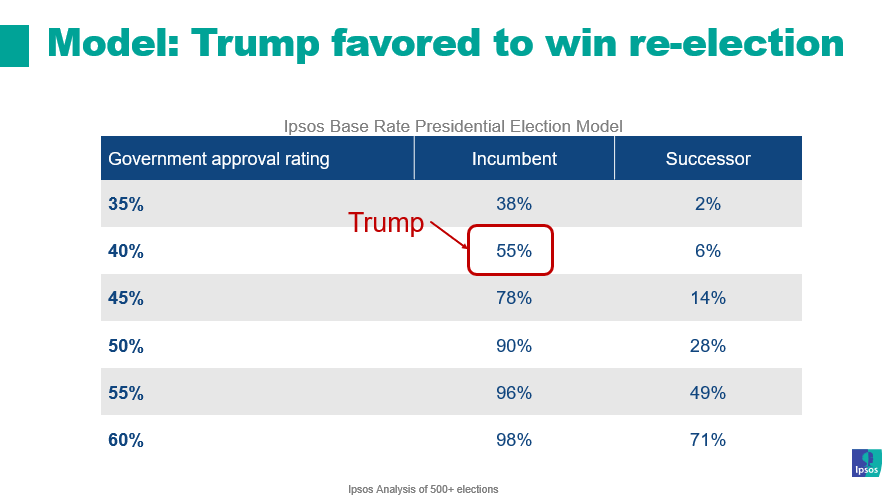 This level of public support also puts Trump in a relatively good position on the question of impeachment. Based on our recent analysis (Cliff’s Take), a president with approval ratings at or above 40% have only a 33% chance of being forced out of office before the end of their term. The probability of departure jumps to 50/50 if public approval drops to 30%, indicating the power of even marginal differences in popular support.

In our contemporary media environment, there is an inclination to treat every new impeachment development as a sea-change. But the reality is that whether it be electoral viability in 2020 or chances of leaving office due to impeachment or otherwise, paying attention to public opinion data is really the key.

Particularly, Trump’s approval ratings should be our analytical focus. If Trump’s numbers stay at 40% or better, he remains in a strong position. If his support dips into the mid- to low- 30’s his risks will significantly increase. Here, it is worth noting that sitting presidents typically improve their approval rating 3-5 points during the electoral cycle as they defend their government's record to make a case for four more years.