My twenty-year-old son came back from college this summer with a large arm tattoo. 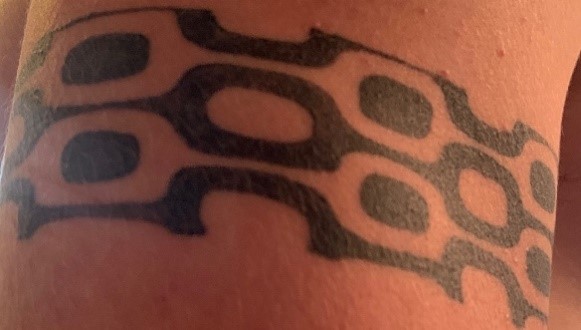 He was so proud… He explained to his mother and I that it replicates the design of the sidewalk along Ipanema beach in Rio de Janeiro, a popular destination (design can be seen here, listed as #8). Since he spent his youth in Brazil, he remains a Carioca (native of Rio) at heart.

We were, of course, horrified that our first born had just branded himself, and a vigorous conversation about tattoos ensued. Were tattoos common? Why did people get them? Was our son’s generation’s fascination with tattoos somehow different?

So, I did what I do and spent the afternoon researching tattoos and body modification. The oldest tattoos were found on a 5,300-year-old Neolithic man who had over sixty of them (Wikipedia). Tattoos historically seem more associated with group or tribal identity, with religious or ritualistic purposes, and even for medical or health reasons. Much of our historical understanding of tattoos is based on the study of traditional cultures today (Tedx Talk: The Cultural Heritage of Tattooing by Lars Krutak). Moving into the modern age, tattoos continued to designate group affiliation. Think about the shared ink of military units, fraternities, and gangs.

Today, however, tattoos have grown into markers of individuality or self-expression. As one author puts it, tattoos are “part of the ongoing narrative of the personal myth” (The Atlantic article). Some scholars think this is especially relevant as traditional group membership and identity breaks down. In an atomized world, what better way to distinguish oneself than branding with ink.

But this history did not answer our questions on tattoos today. To do that, we conducted a “tattoo” poll with Americans a few weeks ago (Ipsos). So, what did we find? 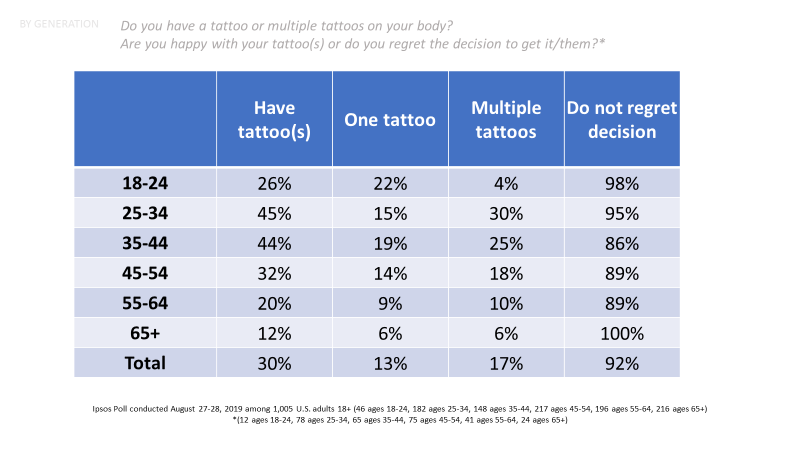 Second, Millennials are much more likely to have tattoos than their parents and grandparents. Specifically, 45% of those Americans between the ages of 25 and 34 have at least one tattoo. Around 30% of these young Americans have multiple tats.

Third, very few Americans regret getting a tattoo (only 8%), and such feelings are independent of age. This suggests that the popular trope of one crazy night with a lifetime of regret is mostly a myth.

Fourth, only 26% of my son’s generation (Gen Z) have tattoos. This suggests that tattooing or body modification is a rite of passage to adulthood. With most states barring tattoos for people under the age of 18, it appears that the rates of tattooing starts slow and picks up in the late twenties – once young people start to establish their own identities and households.

This data suggests that, ultimately, my son is far from being an outlier. If anything, he is an early adopter of what appears to be an increasingly common phenomenon of permanently marking your identity in your skin. If these trends continue, as the older generation passes into the sunset and the younger one comes into full bloom, my son will have many more fellow “tattees” than even today.