New York, NY, December 17, 2021 — A new Ipsos survey finds that, on average, 77% of adults across 33 countries are optimistic that 2022 will be a better year for them than 2021, including 71% of Americans. Indeed, many in the United States and throughout the world look at 2021 as having been “a bad year.” However, stated optimism about next year may just be reflexive as Americans and citizens of many other countries surveyed also expect 2022 to be marked by prices rising faster than incomes and by extreme weather.

Although Americans have the reputation of being eternal optimists, they are warier than citizens from other countries about what 2022 has in store. Americans are not as optimistic about 2022 as they were about 2021 a year ago and they are among those most prone to predicting that a host of unfortunate developments will happen next year.

These are some of the findings of a survey of 22,023 adults from 33 countries conducted on Ipsos’ Global Advisor online platform between October 22 and November 5, 2021.

On average, 77% of adults under the age of 75 in the 33 countries surveyed agree with the statement, “I am optimistic that 2022 will be a better year for me than it was in 2021” – the same percentage as a year ago when respondents were asked about 2021 relative to 2020. 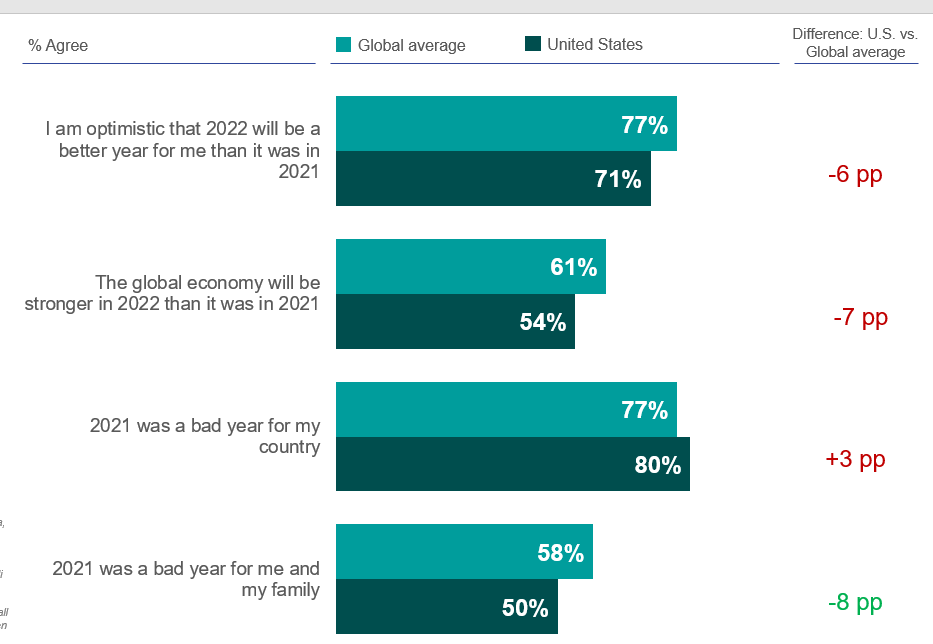 Only five countries show lower levels of optimism about 2022 than the U.S.: Japan, Belgium, Turkey, France, and Germany. In contrast, optimism is most prevalent in China where 94% expect 2022 to be a better year.

Consistently with past years, an average of three in four of the those surveyed globally (75%) and two-thirds of Americans (67%) say they will make some personal resolutions to do some specific things for themselves or others in 2022. Japan (44%) and Sweden (23%) are the only surveyed countries where only a minority will be making resolutions for the new year.

Americans are divided when it comes to the likelihood that major stock markets will crash: 37% say it’s likely, 37% say it’s unlikely, and the rest are not sure. The proportion of Americans who expect a crash in the next 12 months is two percentage points higher than the global average of 35%. Last year, at 31%, it was nine points lower than the global average of 40%, indicating that the U.S. mood is trending in the opposite direction of the global mood.

While more than half of adults in Malaysia and Poland expect major stock markets to crash in 2022, it is the case of only about one in four in Hungary, China, South Korea, and France, Sweden, and Israel.

Majorities in every one of the 33 countries anticipate their city centers to become busy again in 2022 as people get back to working in offices regularly. However, only 64% of Americans say it is likely compared to a global average of 71%. In contrast, more than 85% of those asked in China and Malaysia say this is likely to happen.

While, on average, 56% of adults in the 33 countries surveyed believe that more than 80% of the world’s population will receive at least one dose of a COVID-19 vaccine in 2022, only 39% of Americans do. Only Hungary, Poland, Germany, Switzerland, and Belgium show lower percentages of their citizens expecting this milestone to be achieved than the U.S. In contrast, optimism that it will be met is very high throughout Latin America and much of Asia – most of all in Peru (81%) and China (80%).

At this time, 56% of the world’s population has already received one dose according to Oxford University’s Our World in Data.

A global average of 57% say it is likely that many more people will live their lives in a virtual world next year, including a plurality of Americans (49%). This view is held by about three in four adults surveyed in Turkey, Malaysia, and Brazil. Japan and China are the only two countries surveyed where a majority say it is unlikely.

About four in ten both in the U.S. (44%) and globally (38%) think it is likely that their country’s government will introduce strict rules for large technology companies. From Ipsos’ Global Trends Survey 2021 we know that an average of 83% across the world think social media companies have too much power.

Only four countries (China, Malaysia, India, and Saudi Arabia) show a majority expecting people in their country will become more tolerant of each other. In the U.S., only 21% say it is likely – seven percentage points less than the global average (28%), but about 10 points more than in France, Hungary, Belgium, and Israel.

At 63%, the U.S. leads all 33 countries surveyed in the percentage expecting a natural disaster to hit a major city in their country – 24 percentage points more than the global average of 39%. Only Chile (61%), Japan (60%), and Turkey (58%) come close. In contrast, more than six in ten in Denmark, Singapore, and Sweden say it is unlikely to happen in their nation.

People across the world are divided on the probability that hackers from a foreign government will cause a global IT shutdown: on average, 38% say it is likely while 40% say it is unlikely. In the U.S., more say it is likely than not (43% vs. 36%). It is expected by at least half of those surveyed in Turkey, Spain, and Israel. China is the only country where a majority (70%) say it’s unlikely.

Fewer expect that a rogue artificial intelligence program that can’t be shut down will cause significant havoc globally: only 27% on average across all 33 countries, including 22% of Americans, say it’s likely to happen.

Armageddon? One in three adults (34%) on average globally think is likely that nuclear weapons will be used in a conflict somewhere in the world. The proportion of Americans who expect this will happen is slightly lower (29%). Only Malaysia, Turkey, and South Africa count majorities saying it is likely.

Coming from the sky