Washington, DC, September 21, 2022 -- A new Ipsos poll for ParentsTogether among American adults, with an oversample of American parents of children under 18, finds parents believe that the recent laws banning books or making it illegal for teachers to talk about LGBTQ or racial issues are about politics, not what’s in the best interest of children. When it comes to K-12 schools, parents are most worried about safety, bullying, and preparing children for success. In turn, parents feel that these are the issues that elected officials should focus on when it comes to K-12 public schools, instead of focusing on governing which topics can be taught in the classroom. Indeed, few parents feel elected officials and political groups should have significant input over what is included in K-12 public school curriculums. Finally, when given a choice, most Americans, and parents, feel lessons about racism prepare children to build a better future for everyone as opposed to feeling that lessons about racism are harmful to children. 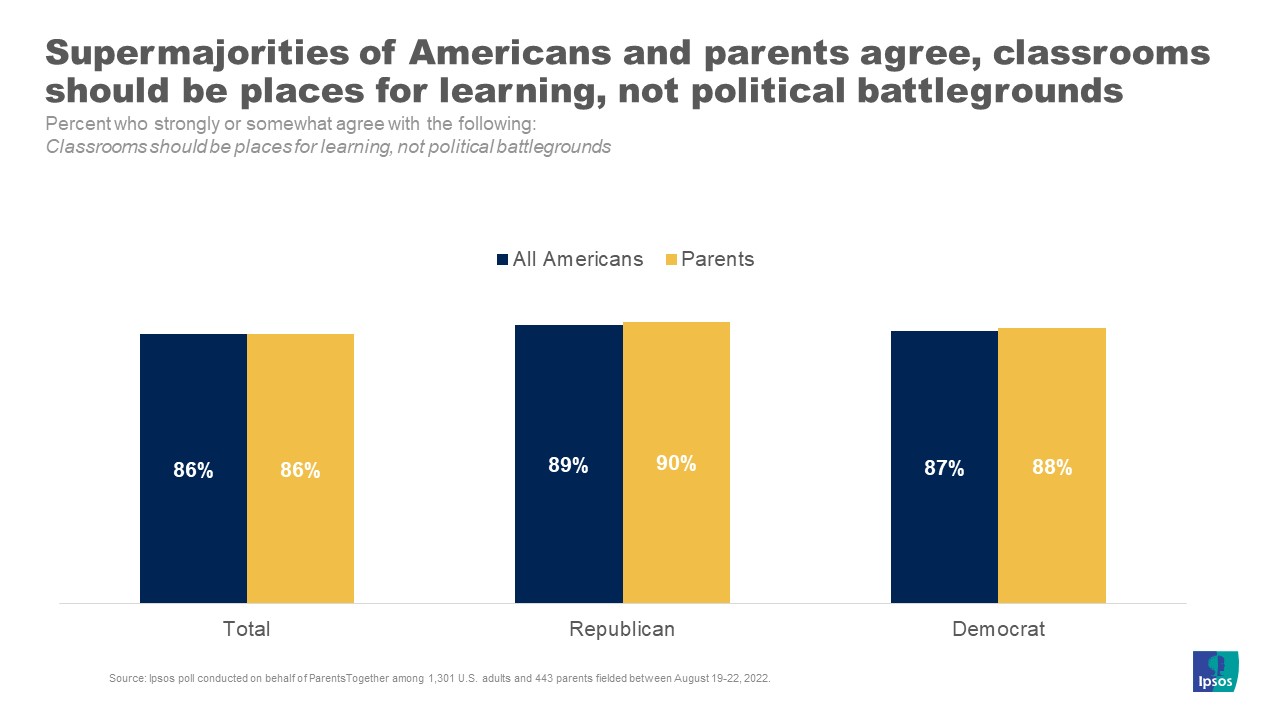 1. Supermajorities strongly agree that classrooms should be places for learning, not political battlegrounds, with three in four Americans (76%) and parents (77%) sharing this sentiment.

2. Two in three (66%) Americans and three in four parents (73%) think that elected officials and political groups are the most responsible for the recent disagreements over what’s taught in public K-12 schools. At the same time, few parents feel political groups or elected officials should have any significant input in what should be included in K-12 public school curriculums, something that is true regardless of party.

3. When given a choice, most Americans (86%) and parents (87%) feel lessons about the history of racism prepare children to build a better future for everyone as opposed to feeling that lessons about racism are harmful to children (12% of Americans and 10% of parents feel this way).

4. When it comes to K-12 schools, parents are most worried about issues impacting safety, bullying, and preparing children for success, and they feel that issues that touch on these topics are what elected officials should focus on, instead of governing which topics can be taught in the classroom.

These are some of the findings of an Ipsos poll conducted between August 19-22, 2022, on behalf of ParentsTogether. For this survey, a sample of 1,301 adults age 18+ from the continental U.S., Alaska, and Hawaii was interviewed online in English. The sample includes 443 Parents, 358 Republicans, 376 Democrats, and 563 Independents.

The survey was conducted using KnowledgePanel®, the largest and most well-established online probability-based panel that is representative of the adult US population. Our recruitment process employs a scientifically developed addressed-based sampling methodology using the latest Delivery Sequence File of the USPS – a database with full coverage of all delivery points in the US. Households invited to join the panel are randomly selected from all available households in the U.S. Persons in the sampled households are invited to join and participate in the panel. Those selected who do not already have internet access are provided a tablet and internet connection at no cost to the panel member. Those who join the panel and who are selected to participate in a survey are sent a unique password-protected log-in used to complete surveys online. As a result of our recruitment and sampling methodologies, samples from KnowledgePanel® cover all households regardless of their phone or internet status and findings can be reported with a margin of sampling error and projected to the general population.

The margin of sampling error is higher and varies for results based on sub-samples. In our reporting of the findings, percentage points are rounded off to the nearest whole number. As a result, percentages in a given table column may total slightly higher or lower than 100%. In questions that permit multiple responses, columns may total substantially more than 100%, depending on the number of different responses offered by each respondent.