One month after the first USA Today/Ipsos coronavirus poll, we see dramatic behavioral changes and growth in anxiety among the American public. The number that feel the virus poses a high threat to them personally, and to the United States, have both doubled, and concerns over potential job losses have risen by double digits. As a majority have started wearing a mask and/or gloves in public, the number of Americans comfortable with traveling on a plane or by public transportation has plummeted.

More than seven in ten feel the virus poses a high threat to the United States. At the same time, the number of people concerned that their local hospital will not have the resources to treat patients has grown by more than 15 percentage points. 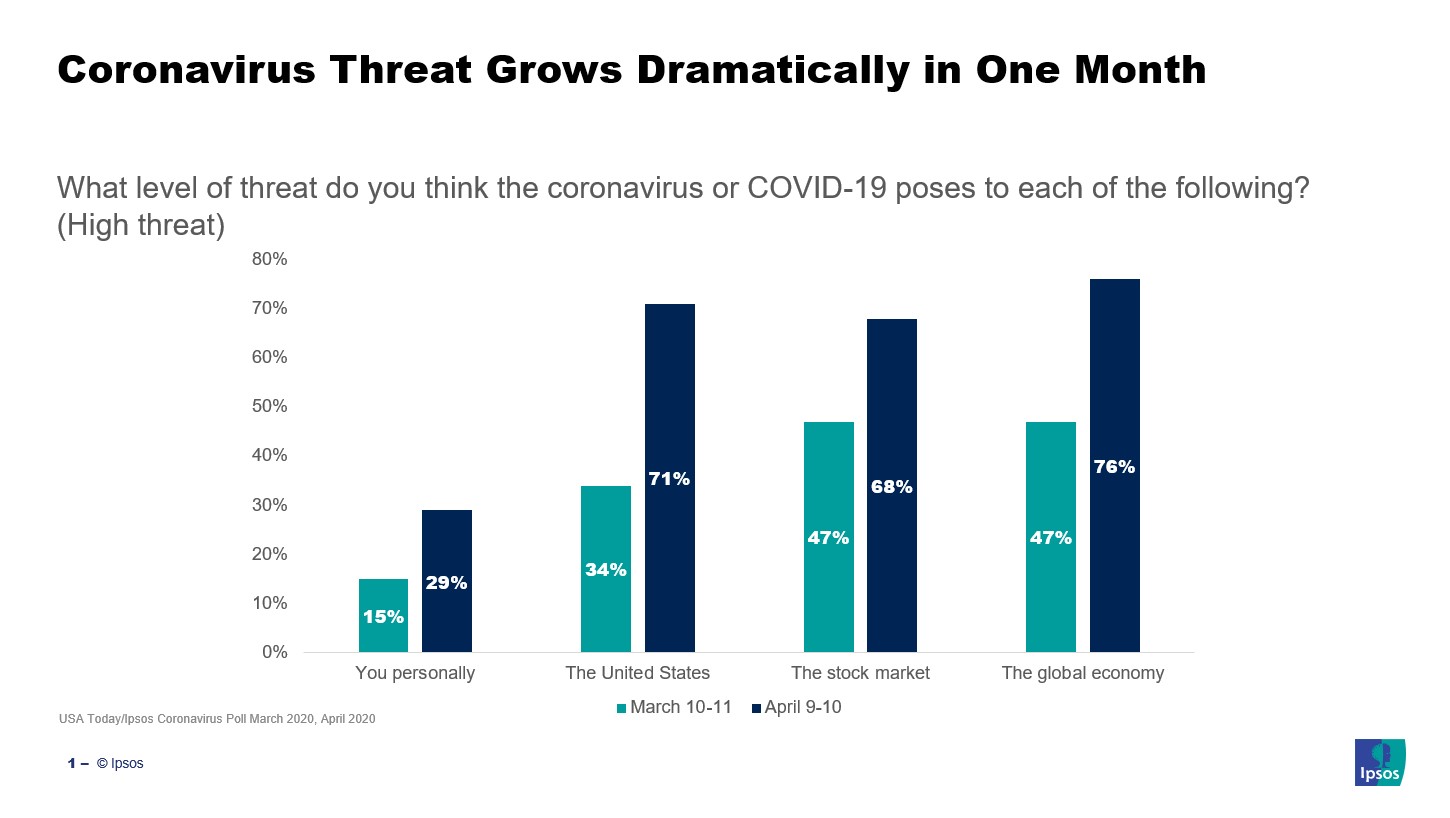 Support for a nationwide lockdown, requiring people to stay home through the end of April except for essential work, is widespread, and a plurality support grounding all domestic flights.

There has been a sharp decline in the number of people saying they would travel by plane or public transportation. Now, just one in ten who have already canceled a personal trip say they would be comfortable taking a personal trip in the next month or sooner.

A new USA Today/Ipsos poll finds that nearly half of Americans believe that the coronavirus outbreak poses a high threat to the stock market (47%) and to the global economy (47%), while less than one in five believe it poses a high threat to them personally (15%). Over half are concerned that someone in their city or town will be diagnosed (54%) and, for parents with children under 18, that their child’s school(s) will close (52%). While a majority report that they plan to wash their hands more frequently (59%), just a quarter say that they plan to stop attending social events, and less than one in five plan to cancel a personal trip (17%). Three in ten Americans report no plans to take preventative measures against the outbreak (30%).

Half say they would not travel on a plane right now, compared to 44% who would. That number is even higher among Americans over age 55 (58% would not travel by plane). Americans are evenly split on whether they would take public transportation (45% agree they would, 47% would not). Only one in five are willing to go on a cruise right now (22%). In terms of a government response, a large majority of Americans want to see the COVID-19 test made widely available (87%), and three-quarters want the government to impose mandatory quarantines for people returning from high risk countries (77%) and temporarily stop immigration from high risk countries (76%). There is an even divide on whether all large-scale events, such as sporting events and music festivals, should be canceled (39% yes, 39% no). While a plurality support temporary financial help for airlines and other affected industries (42%), just 22% want all domestic flights grounded. More (39%) are in favor of grounding all international flights.

Statistical margins of error are not applicable to online non-probability polls. All sample surveys and polls may be subject to other sources of error, including, but not limited to coverage error and measurement error. Where figures do not sum to 100, this is due to the effects of rounding. The precision of Ipsos online polls is measured using a credibility interval. In this case, both waves of the poll have a credibility interval of plus or minus 3.5 percentage points for all respondents. Ipsos calculates a design effect (DEFF) for each study based on the variation of the weights, following the formula of Kish (1965). This study had a credibility interval adjusted for design effect of the following (n=1,005, DEFF=1.5, adjusted Confidence Interval=+/-5.0 percentage points).