Washington DC —Americans consistently think things are worse than they are across a broad range of topics from terrorism and crime to sugar consumption. The United States is not alone in that. In a new Ipsos survey of 38 countries, citizens across the globe over-estimate the problems in their country, thinking that the rates at which people are murdered, suffer from serious health concerns, are victims of terrorism, or take their own lives are higher than statistics show. In many cases, every single country surveyed overshot the mark. 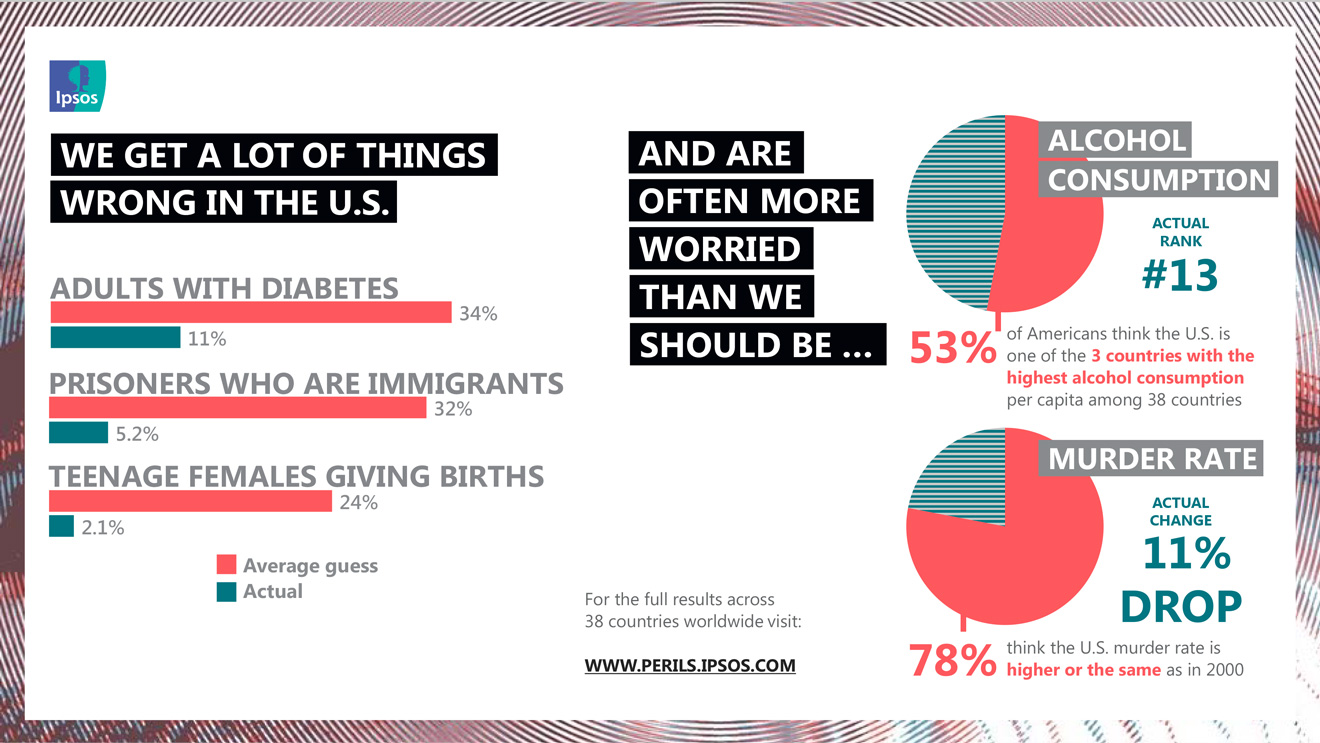 Overall, Americans rank 23rd out of 38 in the Ipsos Misperceptions Index, holding more inaccurate perceptions than citizens from many other nations surveyed, including Russia, Germany, China and Great Britain.

However, Americans proved to be predictable on the topic of sugar: a majority of Americans (69%) correctly identify the U.S. as the highest consumer of sugar per person. Americans are in sync with the other 38 countries surveyed, with 58% of all respondents mentioning the U.S. in the top three countries for sugar consumption.

Some of the key international patterns are:

For more information about conducting research intended for public release or Ipsos’ online polling methodology, please visit our Public Opinion Polling and Communication page where you can download our brochure, see our public release protocol, or contact us.

Ipsos is an independent market research company controlled and managed by research professionals. Founded in France in 1975, Ipsos has grown into a worldwide research group with a strong presence in all key markets. Ipsos ranks fourth in the global research industry.
With offices in 88 countries, Ipsos delivers insightful expertise across five research specializations: brand, advertising, and media; customer loyalty; marketing; public affairs research; and survey management.

Ipsos researchers assess market potential and interpret market trends. They develop and build brands. They help clients build long-term relationships with their customers. They test advertising and study audience responses to various media and they measure public opinion around the globe.
Ipsos has been listed on the Paris Stock Exchange since 1999 and generated global revenues of €1,782.7 million in 2016.