Washington, DC, September 3, 2020 –A plurality of Americans support the protests taking place following the shooting of Jacob Blake in Kenosha, WI, according to a new Ipsos poll, provided exclusively to NPR. Though more support than oppose the protests, the public is significantly divided by race and partisanship. Furthermore, nearly one in five do not have an opinion. Public opinion toward the response to Blake’s shooting by President Donald Trump, Joe Biden, the NBA, and others, is also highly polarized.

Support for the protests occurring in the wake of Jacob Blake’s shooting illustrate deep divisions within the American public – particularly on race and partisanship. 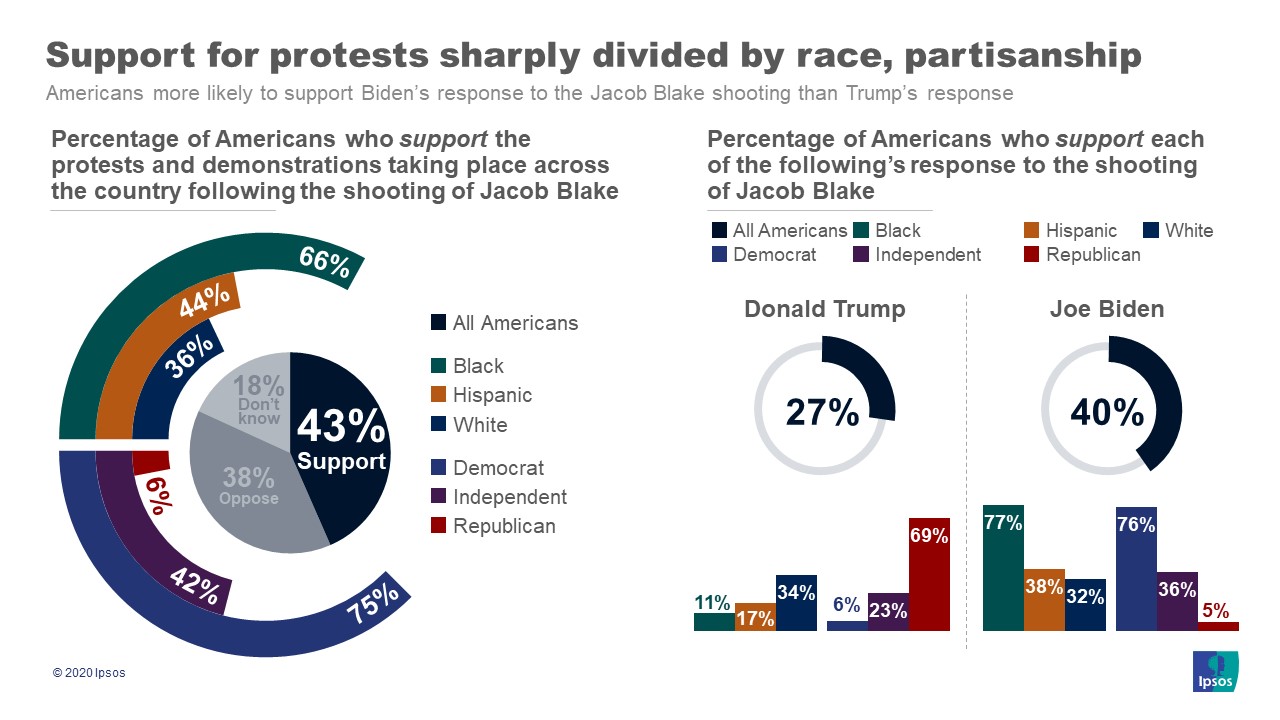 Americans believe COVID-19 to be the most worrying topic facing the country right now. However, Black Americans are equally concerned about COVID-19 and racial injustice.

This Ipsos Poll, provided exclusively to NPR, was conducted August 28-31, 2020 using the probability-based KnowledgePanel®. This poll was based on a nationally representative probability sample of adults age 18 or older (n=1,008). The poll also includes 715 white Americans, 97 Black Americans, 267 Republicans, and 336 Democrats.

The KnowledgePanel is the largest and most well-established online probability-based panel that is representative of the adult US population. Our recruitment process employs a scientifically developed addressed-based sampling methodology using the latest Delivery Sequence File of the USPS – a database with full coverage of all delivery points in the US. Households invited to join the panel are randomly selected from all available households in the U.S. Persons in the sampled households are invited to join and participate in the panel. Those selected who do not already have internet access are provided a tablet and internet connection at no cost to the panel member. Those who join the panel and who are selected to participate in a survey are sent a unique password protected log-in used to complete surveys online. As a result of our recruitment and sampling methodologies, samples from KnowledgePanel cover all households regardless of their phone or internet status and findings can be reported with a margin of sampling error and projected to the general population.

The survey was conducted in English. The data was weighted to adjust for gender by age, race, education, Census region by metropolitan status, and household income. The above design weights for KP respondents were then raked to the following geodemographic distributions of the 18 and over adult population. The needed benchmarks were obtained from the 2019 March Supplement of the Current Population Survey (CPS).