Washington, DC, June 10, 2020 –A new USA Today/Ipsos poll finds that Americans are split on whether law and order or the right to protest is the most important thing to protect right now. Moreover, there are significant racial and political divides in the level of trust in groups to promote justice and equal treatment for people of all races, characterization of George Floyd’s death, and attitudes toward protests near the White House last week.

Most Americans say the death of George Floyd in Minneapolis was murder, though views vary by race and political identification. Two-thirds of Americans support the protests and demonstrations following his death.

More think the protests have been mostly peaceful rather than mostly violent, but Americans are split on if preserving law and order or the right to protest is most important.

Trust in certain individuals’ and groups’ ability to promote justice and equal treatment for people of all races is also split across race and partisanship. Most Americans think President Barack Obama would best handle the current civil unrest. 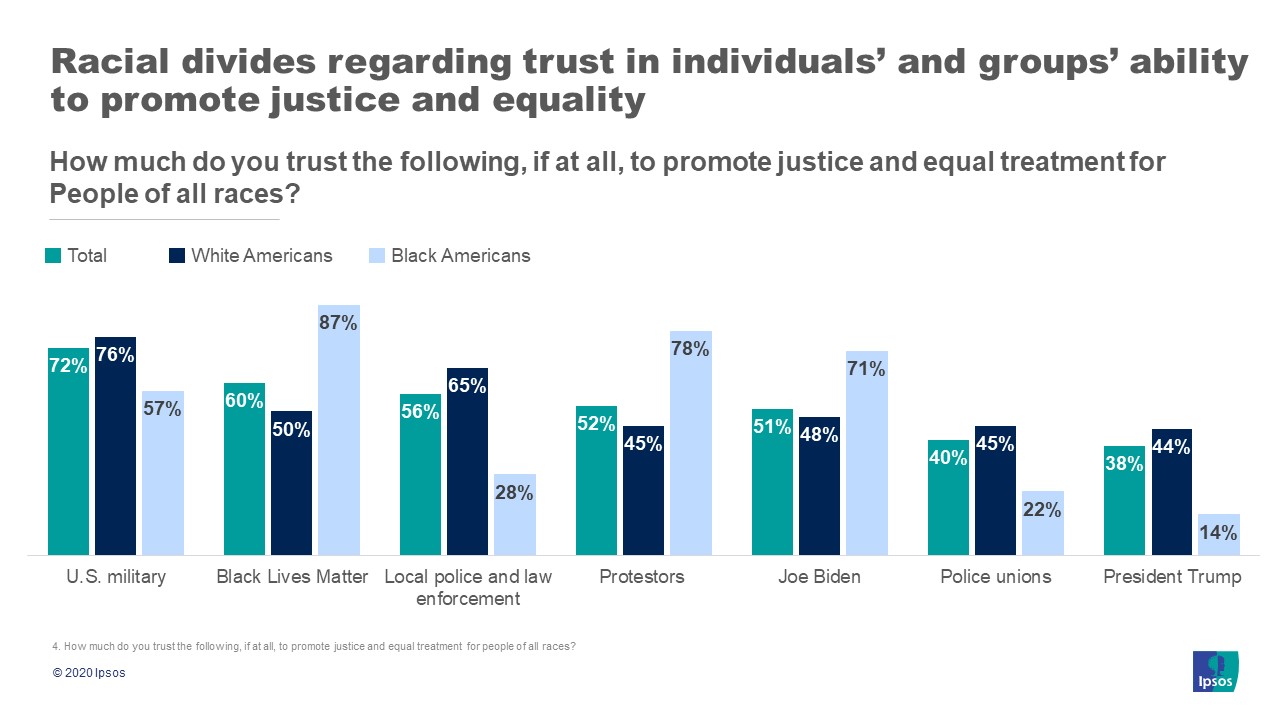 Most Americans (87%) support the peaceful protests outside the White House that took place around when President Trump appeared at a nearby church on June 1. Less than 1 in 10 support the violence and damage to nearby properties that followed the event (9%).

The USA Today story can be found here.

The USA Today story covering Ipsos's tracking of protests across the USA in the wake of George Floyd's death can be found here.

These are some of the findings of an Ipsos poll conducted between June 8-9, 2020, on behalf of USA Today. For this survey, a sample of 1,113 adults age 18+ from the continental U.S., Alaska, and Hawaii was interviewed online in English. The sample includes 757 white Americans, 121 black Americans, 422 Republicans, and 494 Democrats.

Statistical margins of error are not applicable to online non-probability polls. All sample surveys and polls may be subject to other sources of error, including, but not limited to coverage error and measurement error. Where figures do not sum to 100, this is due to the effects of rounding. The precision of Ipsos online polls is measured using a credibility interval. In this case, the poll has a credibility interval of plus or minus 3.3 percentage points for all respondents. Ipsos calculates a design effect (DEFF) for each study based on the variation of the weights, following the formula of Kish (1965). This study had a credibility interval adjusted for design effect of the following (n=1,113, DEFF=1.5, adjusted Confidence Interval=+/-4.8 percentage points).