Washington, DC, May 12, 2020 – A newly released Ipsos poll on behalf of The Washington Post finds that more Americans approve of how their state’s governor is handling the coronavirus outbreak than how President Trump is handling it. States that are reopening early, though, see lower approval for how their governor is handling the outbreak. Most believe that containing the spread of the virus should be prioritized, rather than reopening businesses.

While most approve of their state governor’s handling of the coronavirus pandemic, just under half approve of President Trump’s. 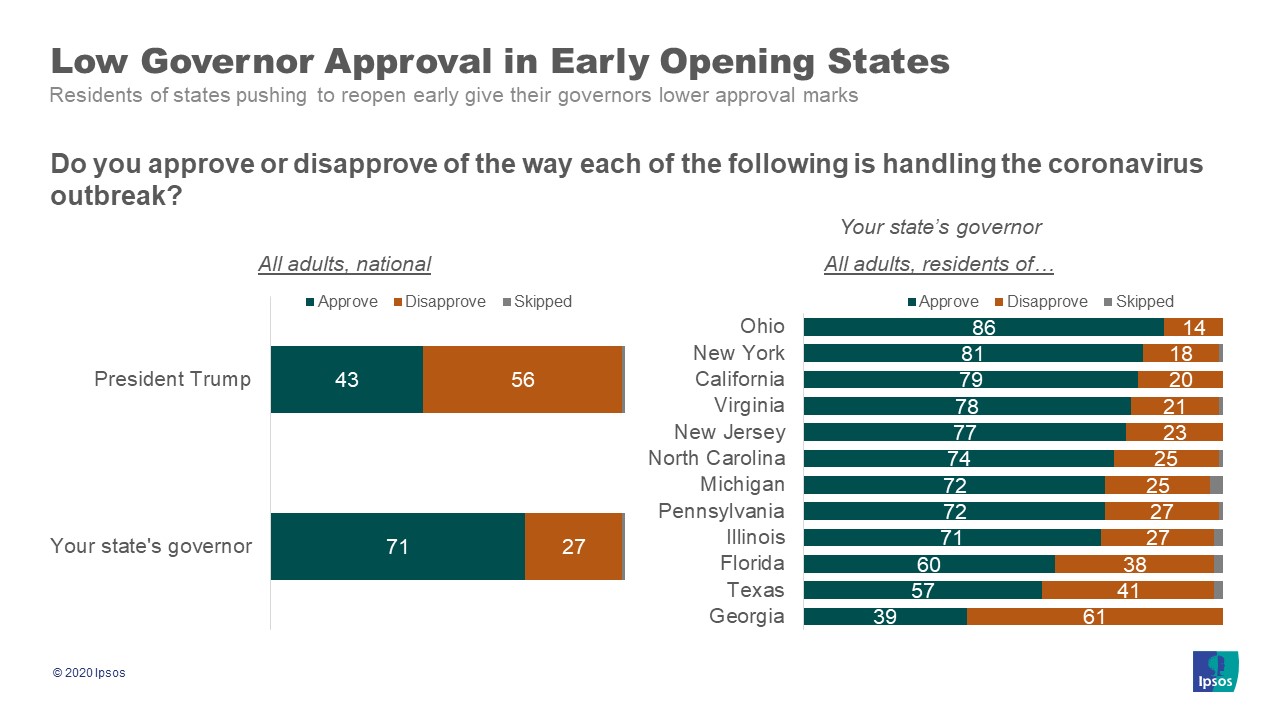 This poll was jointly sponsored and funded by The Washington Post and Ipsos. The poll is a random sample of adults in the United States. Interviews were conducted in English and Spanish.

This questionnaire was administered with the exact questions in the exact order as they appear in this document. Demographic questions are not shown. If a question was asked of a reduced base of the sample, a parenthetical preceding the question identifies the group asked. Phrases surrounded by parentheticals within questions indicate clauses that were randomly rotated for respondents.

Ipsos conducted sampling, interviewing, and tabulation for the survey using the KnowledgePanel, a representative panel of adults age 18 and over living in the United States. KnowledgePanel members are recruited through probability sampling methods using address-based sampling. Panel members who do not have internet access are provided with a netbook and internet service.

This survey uses statistical weighting procedures to account for deviations in the survey sample from known population characteristics, which helps correct for differential survey participation and random variation in samples. The overall sample was weighted to match the demographic makeup of general population adults age 18 or older by sex, region, age, race/ethnicity, education, household income, and language proficiency according to the Census Bureau’s American Community Survey, and to residence in a metropolitan area according to the Current Population Survey.