According to a new Washington Post/University of Maryland poll, conducted by Ipsos, nearly three-quarters of Americans believe fear of contracting COVID-19 should qualify as a legitimate reason to vote by mail, and a similar number would support their state allowing any eligible citizen to vote by mail this fall. Most are confident their vote in the November presidential election would be counted accurately, but confidence in mail/absentee voting is lower than in-person voting and is split along party lines.

1. A majority of Americans would prefer to vote before Election Day, and there is widespread support for allowing excuse-free absentee voting.

2. Eight in ten Americans are confident their vote this fall will be counted accurately, but confidence in mail-in/absentee voting is significantly lower than in-person voting. 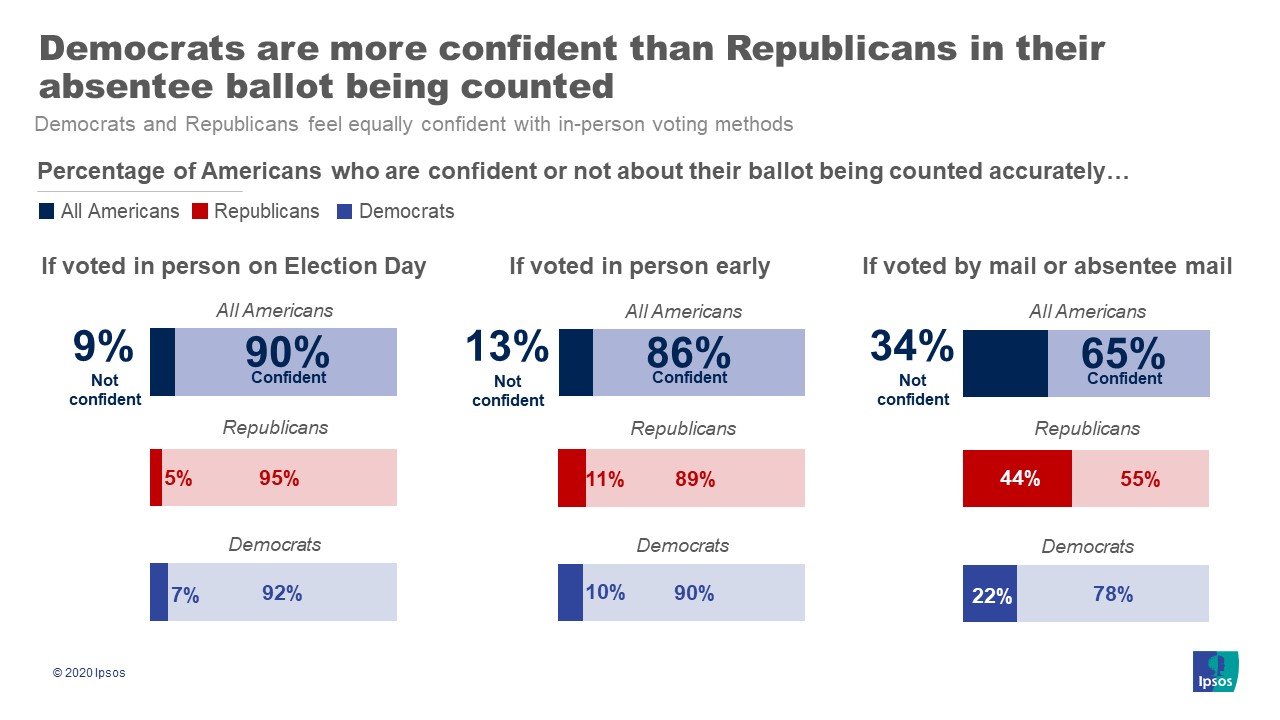 3. Though most think voter fraud and suppression are rare occurrences, most say political campaigns often try to discourage people from voting.

This poll was jointly sponsored and funded by The Washington Post, the University of Maryland’s Center for Democracy and Civic Engagement and Ipsos. The poll is a random sample of U.S. citizens living in the United States with small oversamples in Alabama, Arkansas, Colorado, Connecticut, Delaware, Hawaii, Indiana, Iowa, Kentucky, Louisiana, Massachusetts, Michigan, Mississippi, Missouri, New Hampshire, Ohio, Oregon, Tennessee, Texas, South Carolina, Utah, Washington, West Virginia and Wisconsin. The sample was weighted to ensure citizens from oversampled states were represented in accordance with share of the overall U.S. population. Interviews were conducted in English and Spanish.

The questionnaire was administered with the exact questions in the exact order as they appear in this document. Demographic questions are not shown. If a question was asked of a reduced base of the sample, a parenthetical preceding the question identifies the group asked. Phrases surrounded by parentheticals within questions indicate clauses that were randomly rotated for respondents.

This survey uses statistical weighting procedures to account for deviations in the survey sample from known population characteristics, which helps correct for differential survey participation and random variation in samples. The overall sample was weighted to match the demographic makeup of citizens age 18 or older in the U.S. by gender, age, race/ethnicity, education, household income, Census region, language proficiency and state groupings for oversampled states according the Census Bureau’s American Community Survey (ACS) and to residents in a metropolitan area according to the Current Population Survey.