As America emerges from the COVID pandemic, crime and public safety have re-emerged as a major focus of the American people. This comes as Americans believe (correctly) that violent crime across the nation has increased from last year and (incorrectly) that violence is at a thirty-year high. Support for the police is generally high and bipartisan with majorities trusting the police to improve crime and public safety. Additionally, large majorities support increased police budgets and putting more officers on the street.

However, the social justice protests of 2020 appear to have had an impact with Americans looking for more than just policing. This survey finds less than a quarter of Americans believe police treat all Americans equally. Additionally, majorities support police reform efforts like de-escalation training, directing some police budget to community policing and social services, and independent investigation of police shootings. However, ‘defund the police’ specifically remains unpopular with under a quarter of Americans supporting the movement, including only one in three Democrats.

When it comes to the politics of law and order, the picture is somewhat complicated. Republicans hold a small advantage when people are asked who they trust on crime and public safety – primarily because of support from white Independents and Hispanics. However, Joe Biden is trusted more than Donald Trump with those same groups swinging towards the Democrats. Additionally, when given a forced-choice question, a plurality of Americans line up closer to Biden’s position than the Republican alternative.

1. Americans have a somewhat skewed view of violent crime, with most incorrectly thinking crime rates are historically high.

2. People generally support the police and greater investment in policing. 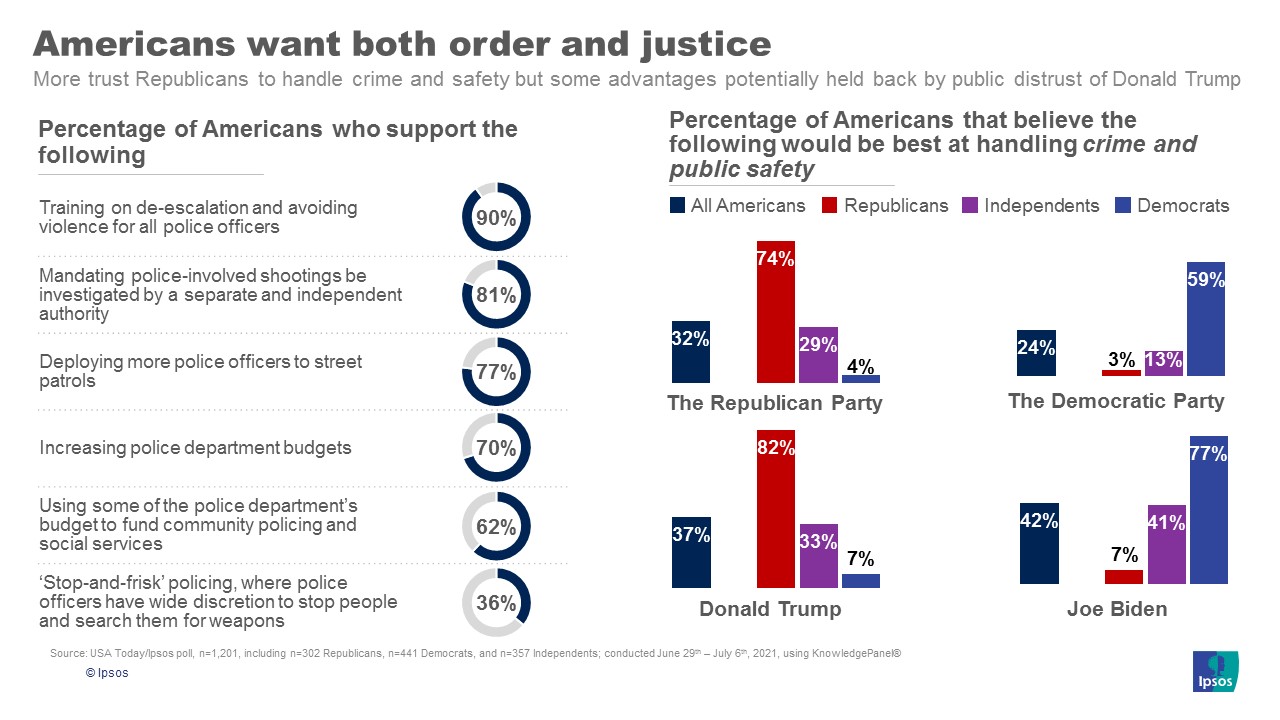 3. However, Americans are equally supportive of reform and appear to want more than just policing.

4. The politics of public safety is complicated, with some Republican advantages potentially held back by public distrust of Donald Trump.

This USA Today/Ipsos Crime and Safety poll was conducted June 29th to July 6th, 2021 by Ipsos using our KnowledgePanel®. This poll is based on a nationally representative probability sample of 1,201 general population adults age 18 or older with oversamples among Black, Hispanic, and Asian/Pacific Islander and Pacific Islander Americans. The sample includes 302 Republicans, 441 Democrats, and 357 Independents.