As the primaries ramp up, Democrats’ number one priority remains a focus on who is best positioned to win in November. Democrats are fired up to vote President Trump out of office in 2020, and they will want the nominee to prove that they have the mettle to grapple with the no holds barred president.

For months, former Vice President Joe Biden has held a clear advantage over the rest of the field for the Democratic nomination. He is viewed as the candidate with the best shot at beating Trump in the general election. 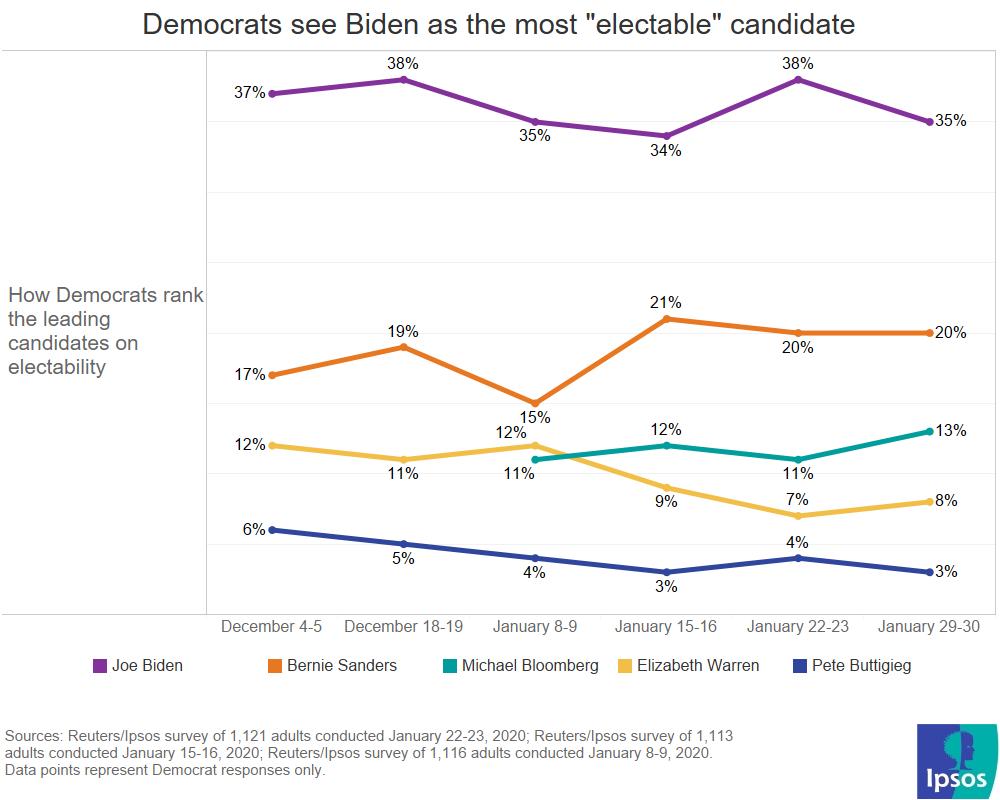 Though Democrats see Biden as the most “electable” candidate, he is not necessarily guaranteed to win the nomination. Instead, he faces competition from other candidates like Senator Bernie Sanders, Senator Elizabeth Warren and billionaire Mike Bloomberg.

Former South Bend mayor Pete Buttigieg may also prove to be a strong contender if his campaign's early predictions from the Iowa caucuses are accurate.

But electability alone is not the only factor voters are considering as they vote in the primaries. Other factors can matter as much or more. They want to support candidates who champion policies and initiatives that resonate with their own values and interests.

Case in point – Sanders supporters are not overly concerned with perceptions of electability. 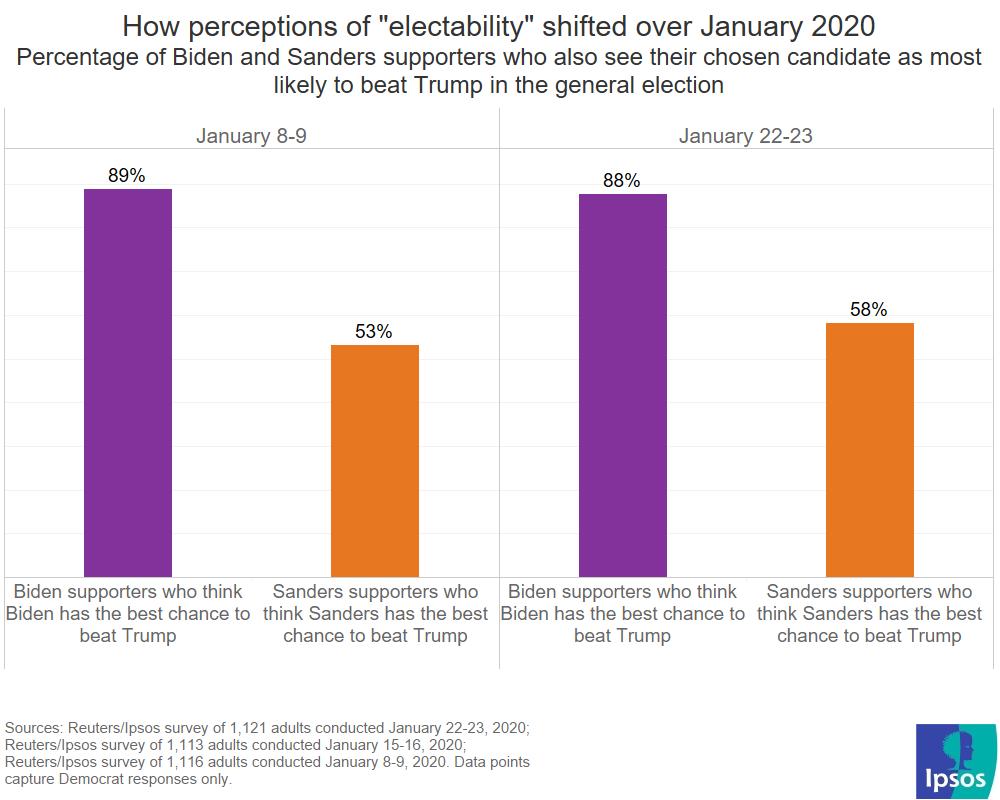 A little over half of Sanders supporters think that the Vermont senator is best positioned to beat Trump in the general election. This stands in stark contrast with the near universal confidence that Biden supporters hold in their pick for the primaries.

In fact, one in five Sanders supporters are planning to vote for Sanders in the primaries despite believing that Biden actually has a better shot at beating Trump in the general election. 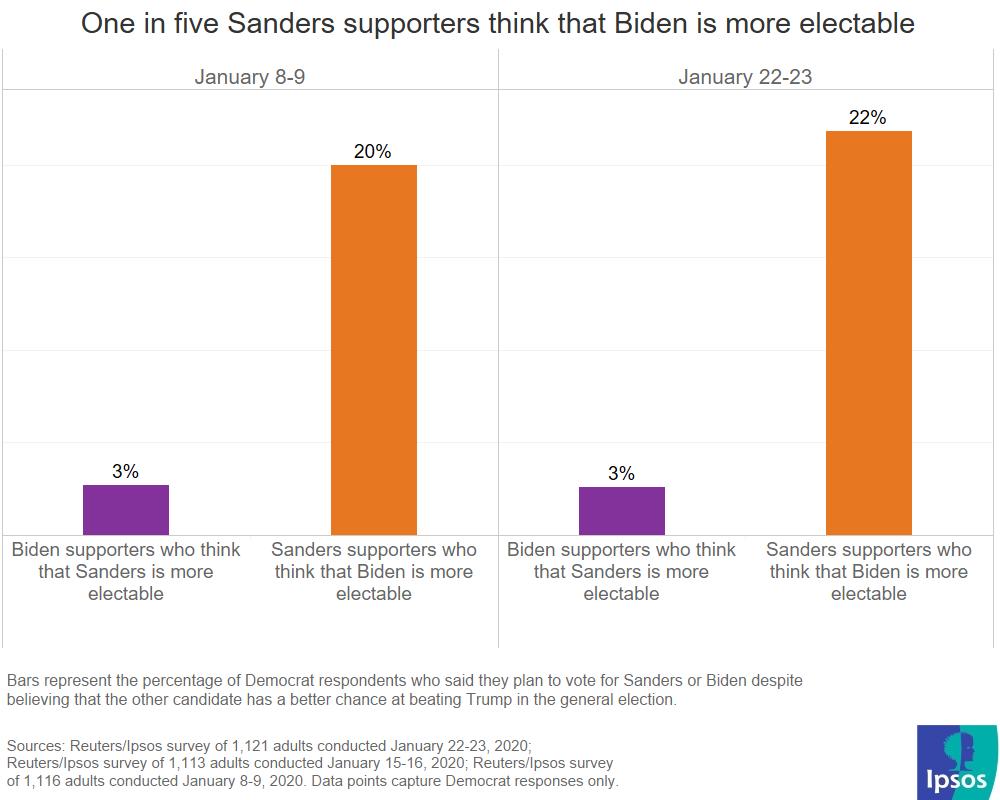 Though some Sanders supporters may have their doubts about his chances, at least compared to Biden, Sanders is still seen as having relatively strong chances of beating Trump. Sanders is currently second to Biden on the electability front in the national polls, having established himself as the leading anti-establishment candidate with a sizeable and energized base across the country.

Sanders supporters are also particularly devoted to their chosen candidate. Only half of Sanders supporters will definitely support the Democratic nominee in the 2020 election if the Vermont senator does not win the primaries, a recent National Emerson College poll found.

Voters who support other candidates, meanwhile, said that they would put their preferences aside and rally behind the eventual nominee in the interest of voting Trump out of office. It would appear that some Sanders supporters are not motivated by party unity. Instead, they are single-candidate voters.

Still, those Sanders supporters who aren’t primarily motivated by perceptions of electability are in good company with other Democrats. When choosing a candidate, a plurality of Democrats say that they support their chosen candidate because “they have the right ideas or policies,” and around one in five said they were because “they would make a good president.” Just a small percentage say it is because they believe their candidate “can win the general election.” 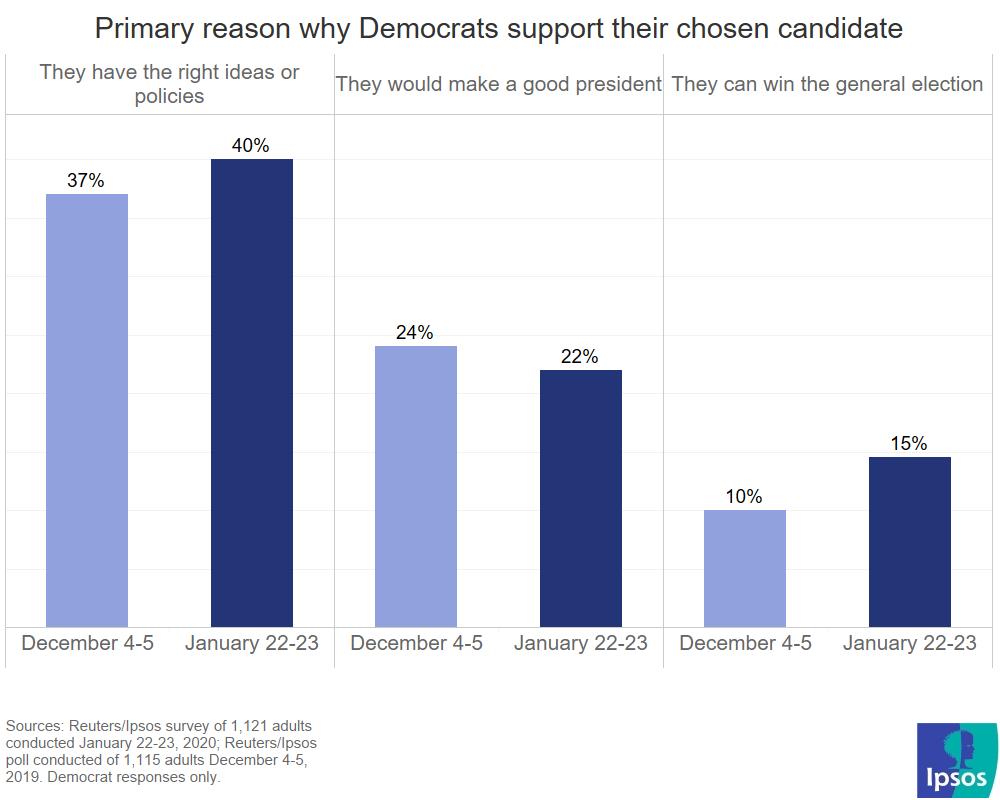 Electability is a murky concept, and ultimately can only be proven on election day.  Nor is leading on perceived electability in the polls a guarantee that the candidate in question will win, as prior events attest. After all, most of the country thought that Trump didn’t have a chance at winning the general election up until midnight on November 8, 2016.

Of course, much can change between now and the general election. As the results of the primaries and caucuses roll in, perceptions of a given candidates’ relative strength in a match-up against Trump may shift. Or perhaps one of the candidates currently trailing Sanders and Biden in the polls will gain momentum as the primaries progress and convince more voters that they have what it takes to win the White House.