Addiction rarely just consumes or harms the addict. It can have wide-reaching implications for everyone in the addict’s orbit, from their family members and friends to more distant social connections.

A striking aspect of addiction is the way it spreads through communities, families and friend groups almost as though it were a communicable or inheritable disease. A recent Ipsos survey bears this phenomenon out. Respondents to the Ipsos survey who are struggling with addiction are much more likely to know other people who are also addicted.

The reverse is true if they are not addicted: they are much less likely to be related to or know addicts. 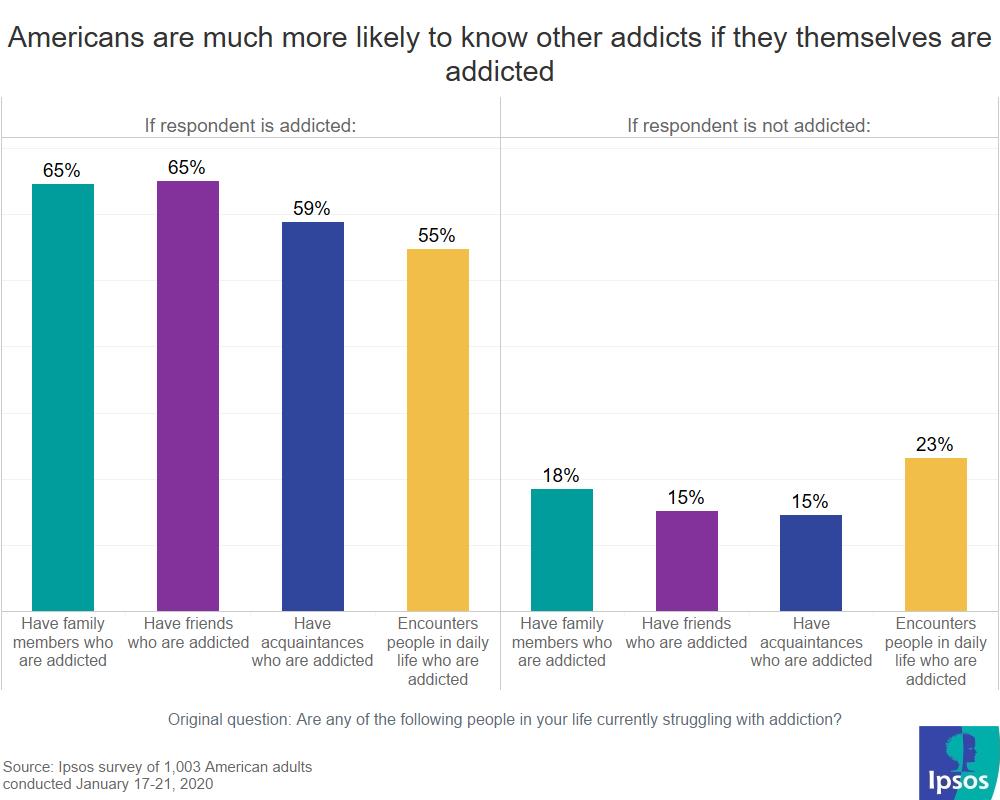 To be clear, it is still very common to know someone struggling with addiction without being addicted yourself. Some form of proximity to addiction is more likely than not: 56% of respondents to the Ipsos survey said that they know someone who is struggles with addiction (in this survey, we were primarily seeking to learn about respondents’ connections to people with substance use disorders).

It’s important to keep in mind that this survey is only counting people who believe that they know an addict. Addiction can be difficult to detect for any numbers of reasons: the addict may be actively covering up their addiction, be high-functioning, or the addiction is simply not apparent at a superficial level.

So, what explains this connection between addiction and social and familial proximity to other addicts?

The theory that addiction may be “inheritable” may have some basis in reality. Medical research suggests that genetics do in fact have some influence on the likelihood of developing an addiction. Alcohol addiction, (one of the most common forms of addiction) is known to sometimes run in families. Studies suggest that there are in fact genes that contribute to an enhanced risk of developing an alcohol dependence, such as the genes that determine how the liver metabolizes alcohol. That said, there is no “alcoholism gene,” per se.

Yet there are clearly many other factors at play beyond genetic inheritance when it comes to developing a substance use disorder.

Case in point: the current opioid epidemic, which has claimed the lives of more than 700,000 people from overdose deaths between 1999 and 2017. The opioid epidemic spread in complex ways. It can be attributed to a range of factors, from aggressive marketing from pharmaceutical companies interested in cashing in on mountains of painkillers, or physical ailments that force patients to seek out opioids to mute the pain they’re in, and more.

But it also goes back to the concept of addiction as a social contagion. Addiction manifests itself as a behavior, albeit one that can be ultimately self-destructive.  As such, it can be passed from person to person as a “learned behavior.” We see this in friends introducing their friends to drugs, and family members seemingly imitating each other by developing dependencies to certain substances.

It’s also true that drug addiction is more likely to befall and be sustained by people who have limited alternative means of coping with the stresses and uncertainty of their lives. Is it any surprise then that the opioid crisis hit certain places much harder than others? Recovering from addiction is much more challenging when economic and life prospects are not as high.

West Virginia and Washington, D.C., are two of the places hardest hit by the opioid epidemic. Inhabitants of both places – despite the two being vastly different in terms of one being rural, the other urban (not to mention also being the nations’ capital) – are both subject to economic and social forces beyond their control. West Virginians have been hit by the disappearance of jobs with decent wages and the hollowing out of their communities as the coal industry contracts. In Washington, D.C., one of the most rapidly gentrifying cities in the country, lower-income residents are faced with being priced out of a competitive housing market, which is also disruptive to communities and a way of life.

Americans agree that addiction is a major issue in the United States, and generally public perception seems to be shifting away from blaming the addict for their supposed personal failings to a hunt for more proactive solutions to this social issue. It is also an area where there is bipartisan agreement.

Both Democrat and Republican-leaning respondents to the Ipsos poll agree that addiction is a “serious issue” facing the country. Democrats and Republicans alike also say that they favor using public funds to support initiatives to assist people struggling with addiction. 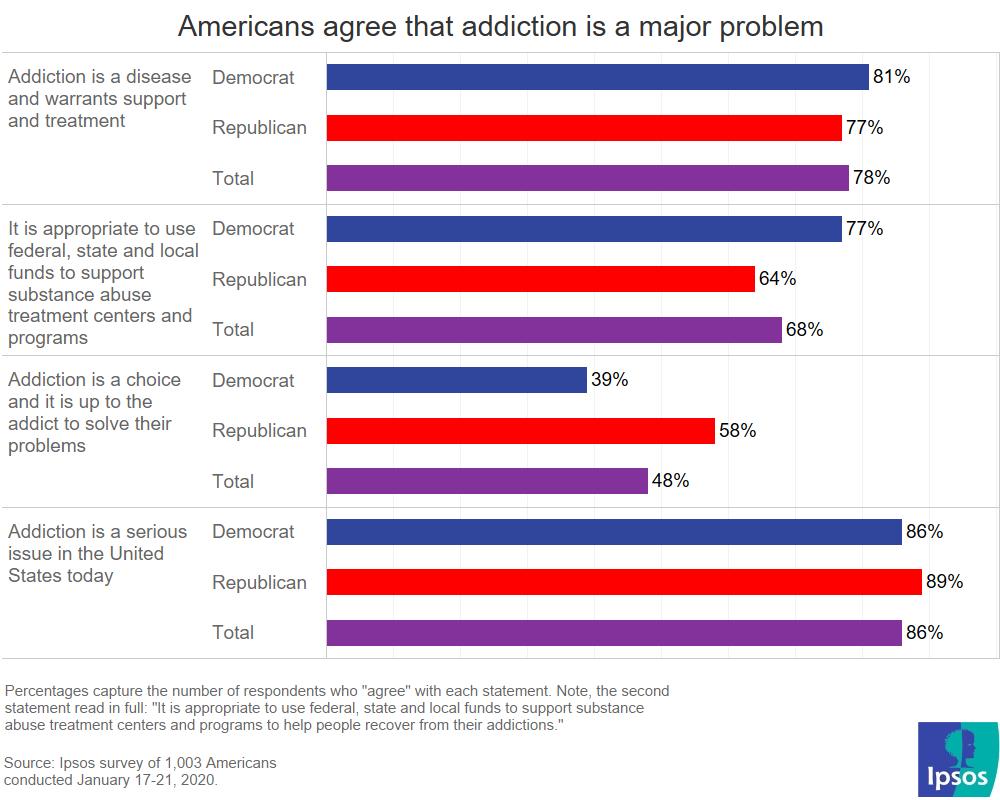 Just as addiction can be a learned behavior, recovery and sobriety can be learned behaviors as well. Since people can get hooked on drugs or alcohol due to a variety of factors ranging from their genetic predisposition, neighborhood, and social network, spending time with people who are not addicted or have achieved sobriety can offer a path forward. Organizations like Alcoholics Anonymous are a prime example of this, with their emphasis on mutual support through joining a community. The way addiction spreads through social osmosis provides clues as to how to reverse it.