The partisan divide on the coronavirus is now deeply engrained. In one camp, the virus is seen as a significant threat to lives and livelihoods; in the other, it’s regarded as overhyped or even a hoax. These dueling realities were sustained up until recently in part by the path of the virus, which affected traditionally Democratic parts of the country first.

As the virus expands its reach across the red states of the South and Midwest, the question becomes whether direct experience with the virus will inspire more Americans to change their mind about the degree of threat it represents, and alter their behaviors in the interest of the common good. So far, Ipsos data indicates that even record-breaking numbers of new cases from Florida and Texas have not been enough to substantially close the stubborn partisan gap in levels of concern about the virus at a national level. 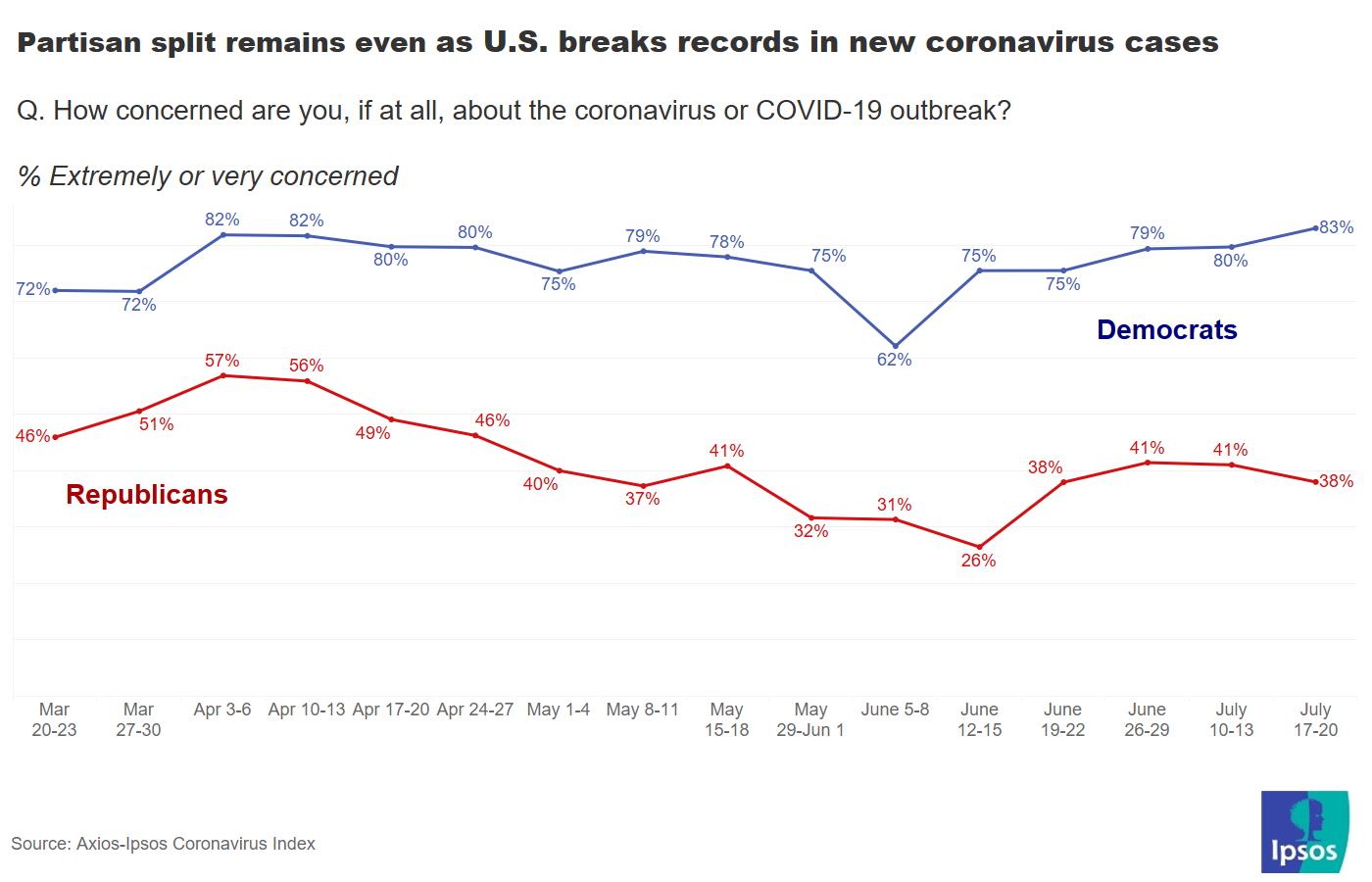 Behavior follows concern, as became evident when states began lifting social distancing measures around Memorial Day. Activity took off again, with a particularly notable drop off in social distancing in the Republican strongholds across the South and Midwest, according to an analysis of Ipsos Biosurveillance Atlas cell phone location tracking data.

While Democratic-leaning regions of the country were slower to lift restrictions, the Biosurveillance Atlas shows that even in typically liberal parts of the country, like New England, social distancing adhered to partisan lines at the local level. In states like Connecticut, Maine and New Hampshire, many of the counties that voted for Trump in 2016 have been more lax about social distancing than those that voted for Clinton. 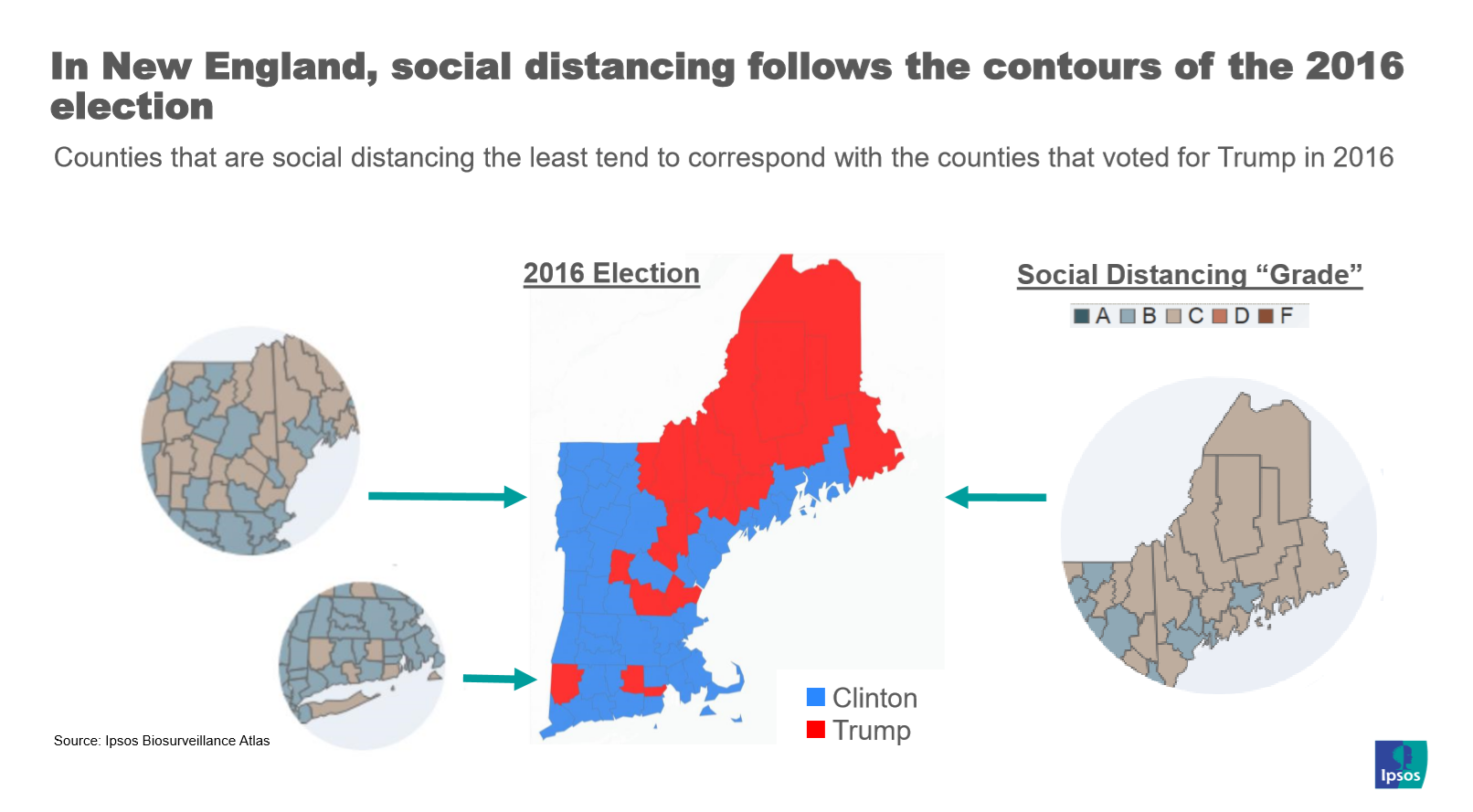 Unfortunately, many of the states that were early to open are now the new epicenters of the virus as it makes its way inland from the original hotspots of the coast. After New York and other states succeeded in tamping down the crises within their borders, experts initially worried about a “second wave” of the virus to come in the fall. Instead, it would appear that the first wave never really ended and has simply moved to more hospitable terrain. States like Florida, Texas and Louisiana (among others) are now experiencing the worst of it.

In response, public health officials on both sides of the aisle are now imploring Americans to follow social distancing protocols whenever possible and to wear masks in public. President Trump, notably, wore a mask for the first time in public on July 12th after criticizing people who wear them for months. Masks remain one of the most effective tools at our disposal to slow the spread of the virus, beyond social distancing or self-quarantining.

Yet after months of partisan wrangling on the subject, mask use is still politicized. Data from the most recent Axios-Ipsos Coronavirus Index survey shows a clear partisan divide in views on how often masks should be worn in public. Republicans and Democrats come closest to agreeing on wearing masks within grocery stores, contained spaces that enable the spread of the virus, but differ around wearing masks outside and when spending time with friends and family. 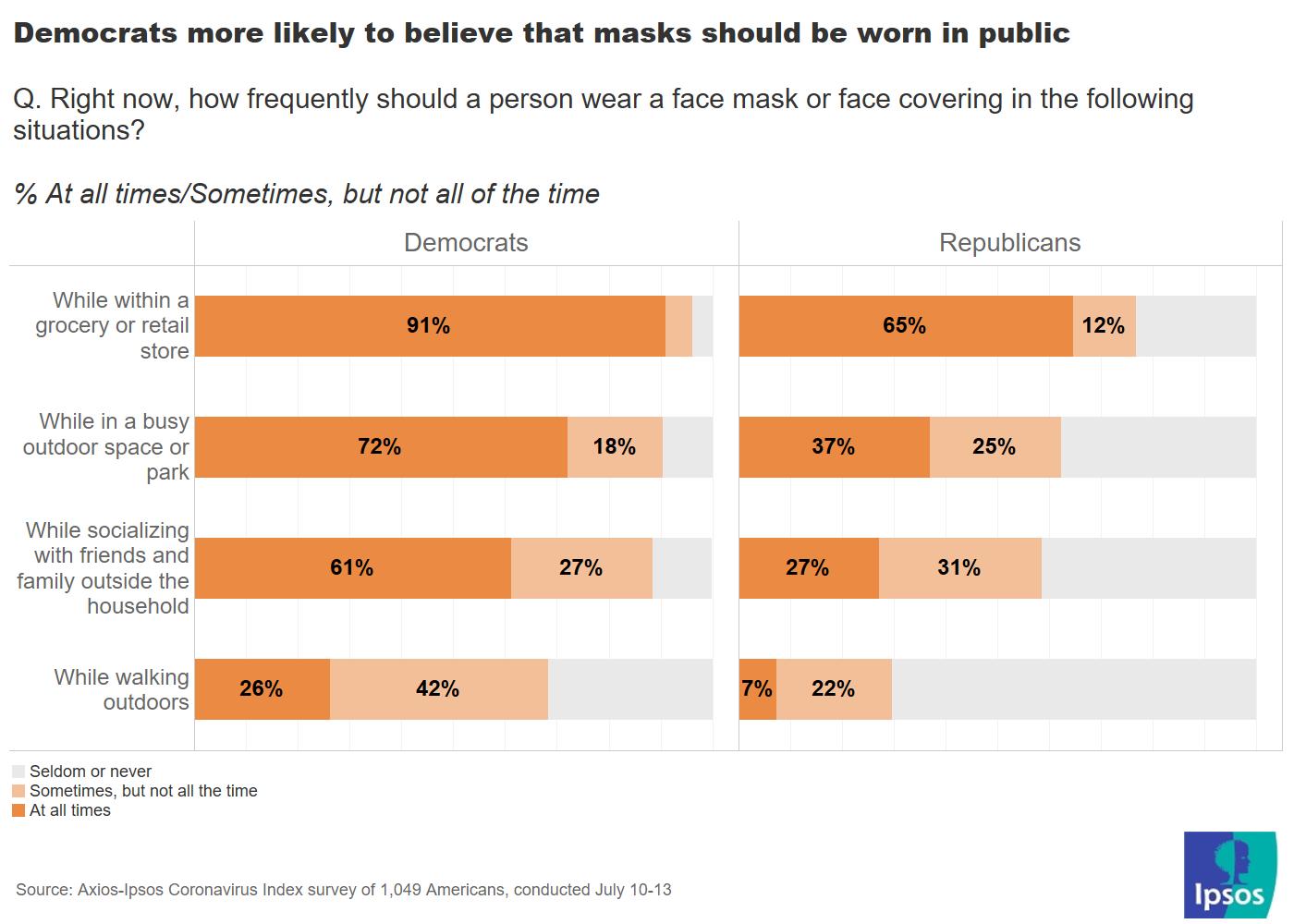 Though the pandemic is still evolving in the United States, Ipsos data shows that Americans are continuing to socialize more, going out and seeing friends and family.

On a positive note, mask usage is also trending upwards, particularly in states like Arizona, Florida and Texas, where cases spiked dramatically in recent weeks. But in a more ominous sign of what may come next, our indicators show that the people most likely to be socializing, frequenting restaurants, and not giving other people a six-foot berth in public spaces also report being less likely to always wear a mask in public.

Taken together this presents a picture of highly partisan behavioral responses to the pandemic at the local level. As the virus continues to spread through the country unchecked, it remains to be seen if these different patterns of behavior will channel the worst of the outbreak into the very communities that discount its existence.