In moments of extreme crisis, people generally are willing to give leadership the benefit of the doubt. It’s a phenomenon known as the “rally around the flag” effect, best exemplified in recent history by the extraordinary approval numbers that President George W. Bush enjoyed in the immediate aftermath of September 11th. People are willing to set aside their partisan differences to tackle the collective threat at hand.

However, as the United States confronts a global pandemic, many American leaders have not received a surge in support and tribal divisions remain strong. Public opinion data suggests that the potential for national unity existed, but many political leaders squandered it through not putting constituent health first.

Our Axios-Ipsos tracker shows trust in the federal government has fallen by 30-points from late March to early August. And while major differences in trust across parties remains, the data nevertheless suggest that even Republicans are shaken by the current state of affairs. At this stage of the crisis, Americans are looking for a centralized, coordinated response to the virus from the federal government. 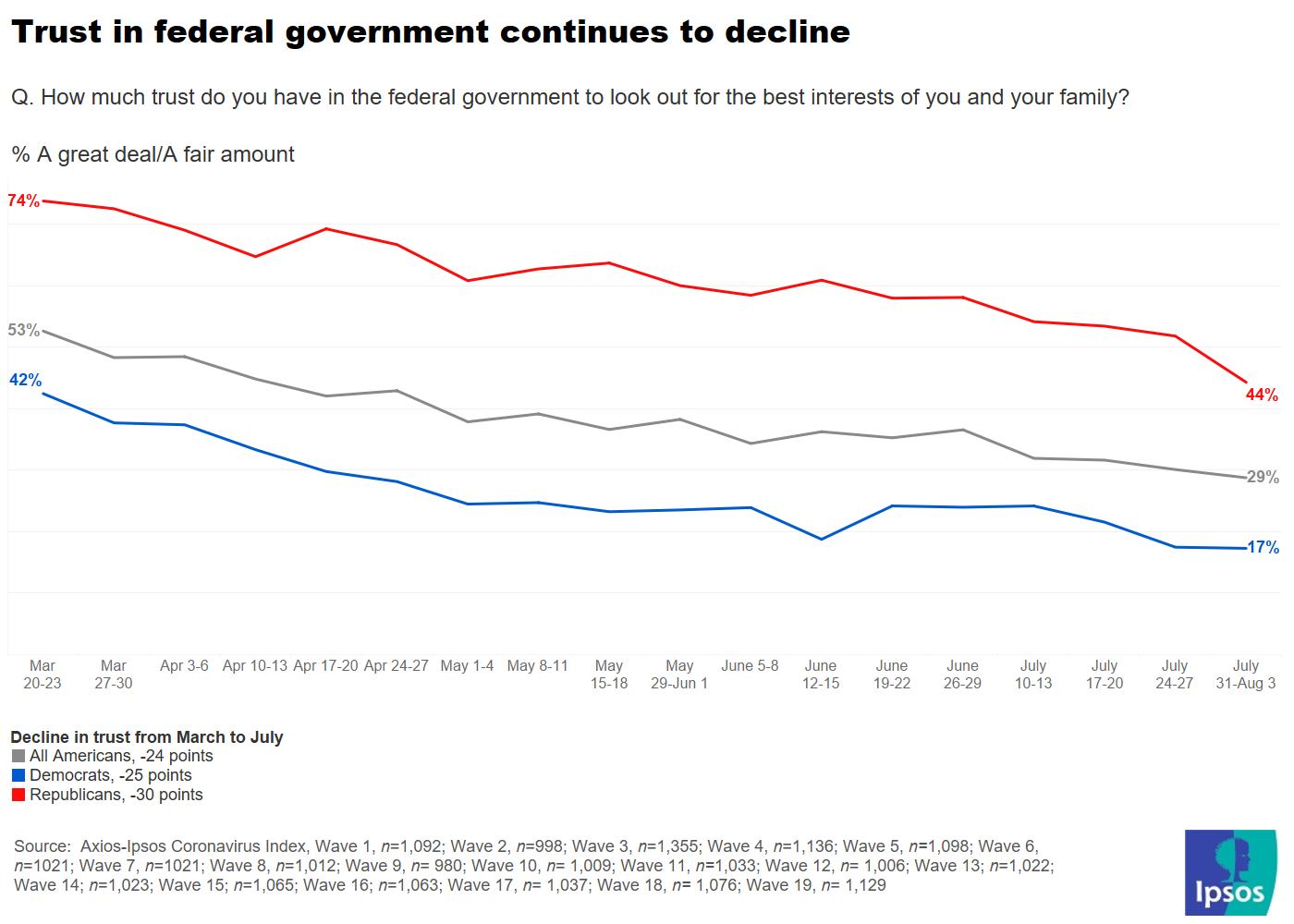 In the leadership vacuum left by the federal government, other entities stepped up. Initially, some of the strongest leaders to emerge from the pandemic were state governors. When it became apparent that the crisis was at their doorstep governors took early action to close businesses and restrict activity, secure ventilators and PPE, set up field hospitals, and hold regular update briefings with the public.

The Axios-Ipsos Coronavirus Index, which represents a cumulative 19 weeks of tracking data, shows that Americans started out with greater levels of trust in state governments. As trust in the federal government evaporated, trust in state leadership held steadier. However, as the crisis has worn on, public faith in state leaders has also declined, falling 17 points from March to early August.

That decline is not universal on a state-by-state basis. Instead, the sharpest drop appears in states that reopened early and have since experienced a surge in new cases– namely, Florida, Arizona, Texas and Georgia. Conversely, in states like California, Louisiana, Pennsylvania and Washington, despite also having high numbers of coronavirus cases, the majority still trust state leadership. 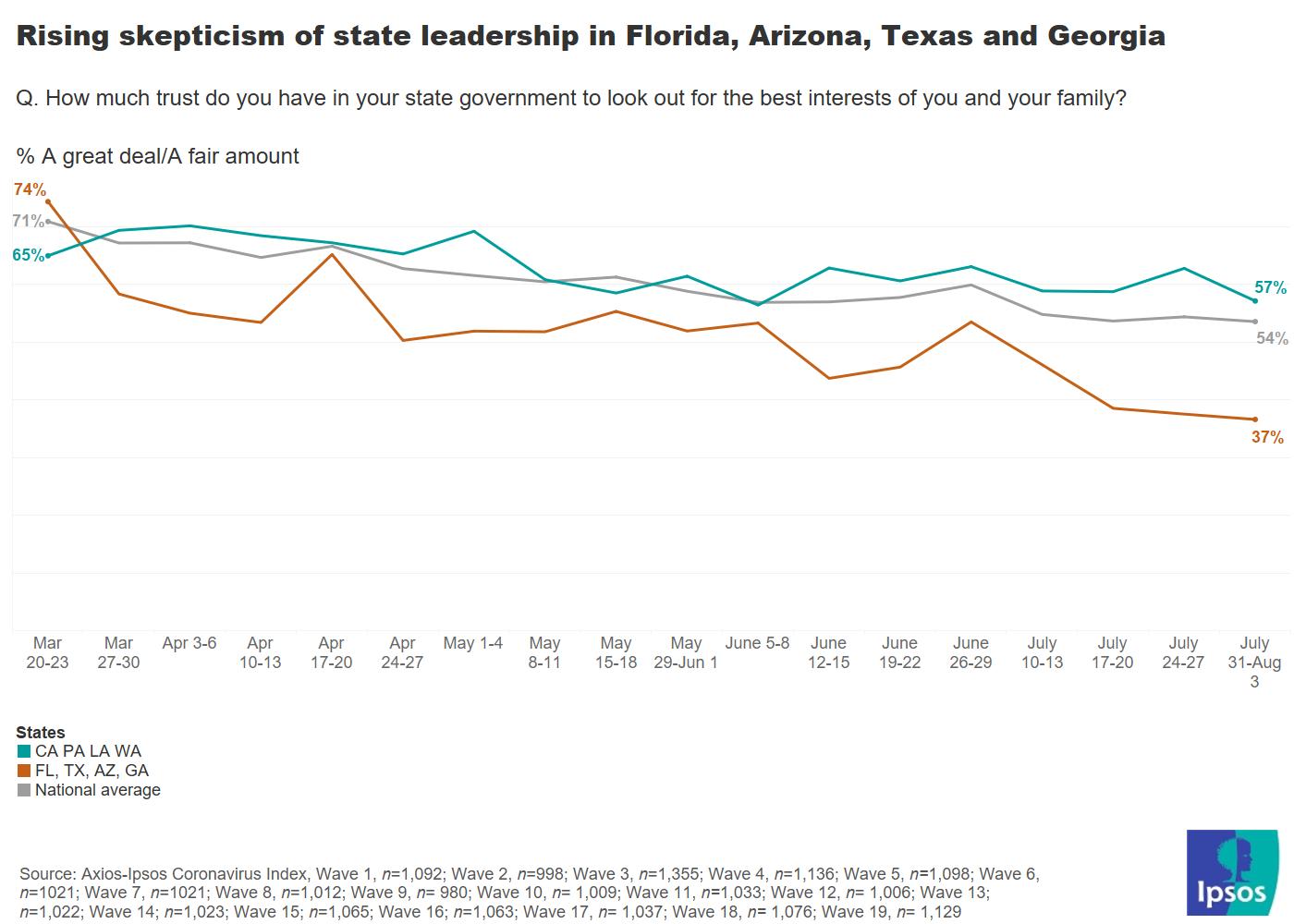 One of the central dilemmas of the pandemic as it has played out in the United States is the push to reopen at the expense of public health under the guise of getting people back to work. With millions of jobs lost and businesses suffering due to restrictions, the economic consequences of the virus have been severe. Yet rushing to reopen is not the easy win that some governors seemed to think it might be.

A clear correlation between falling trust in leadership and high levels concerns about the virus is evident. In Arizona, Florida, Georgia and Texas, concern about the coronavirus corresponds with lower levels of trust in state leadership. Meanwhile, those who say that they trust state leadership tend to be less worried about the virus. Considering how low trust overall has fallen in these states, the data suggest that many living in these states are alarmed by the surge in cases and are placing the blame at the feet of state leaders. 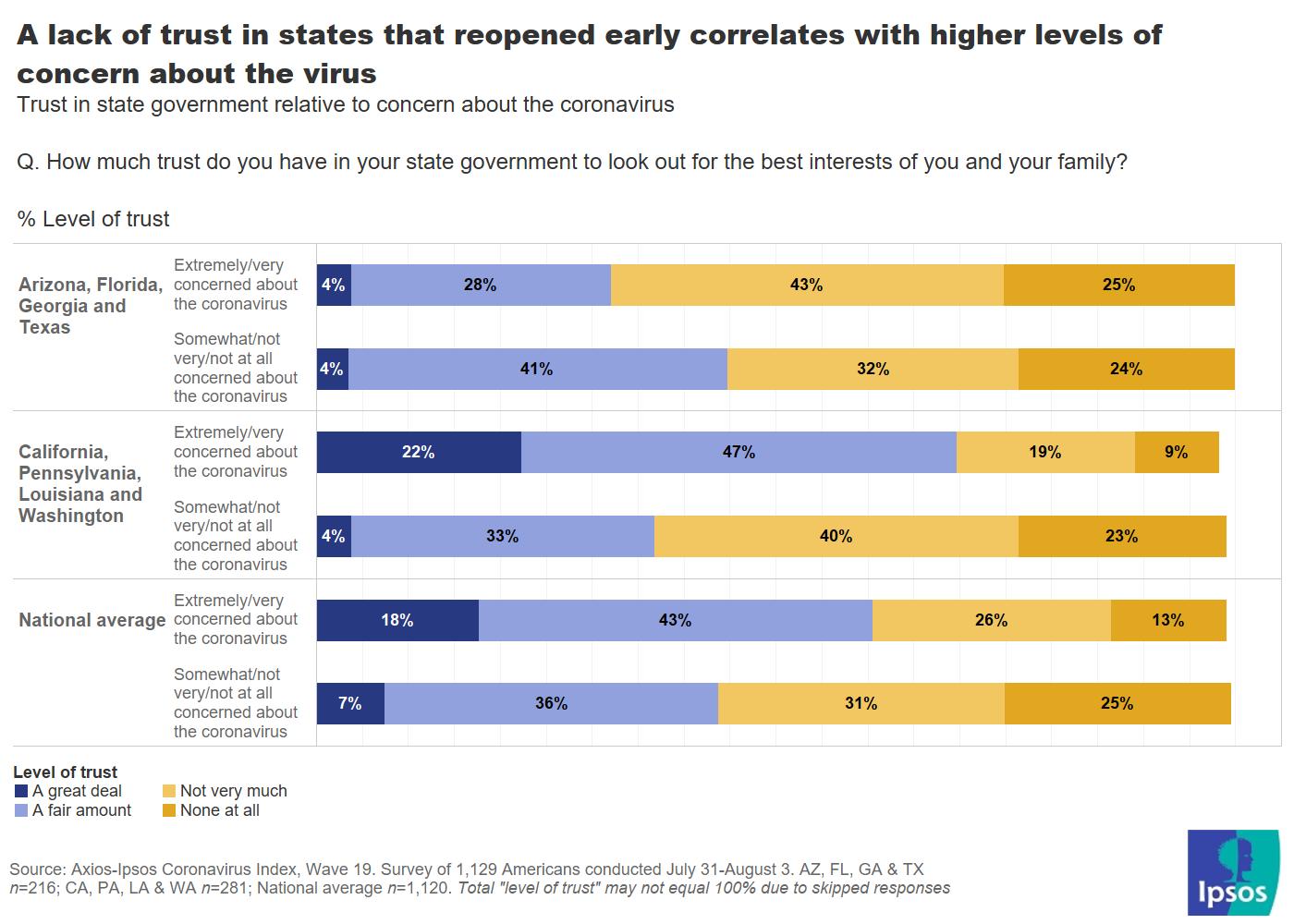 Meanwhile, the opposite dynamic is playing out in California, Pennsylvania, Louisiana and Washington. While these states too are grappling with high numbers of cases, state leadership by and large adhered more closely to the advice of health experts when making decisions to shut down or stay open. There, the trust/concern dynamic is flipped, likely reflecting broader approval of the more measured approach these states took to the coronavirus.

As the United States confronts new outbreaks in a patchwork of states and a rising death and hospitalization rate, more Americans are showing signs of trepidation about allowing economic activity to start up again. According to ongoing tracking data from the Ipsos U.S. weekly consumer confidence survey, Americans’ views on the relative wisdom of reopening before the virus is contained tends to correspond with how severe the crisis is in the moment.

As the number of daily new cases and deaths began to fall in late May, Americans started to see less risk in reopening before the virus was contained. But as cases rose again through June and July, that trend reversed at the national and regional level. In the most recent wave of confidence consumer data, just 40% of all Americans said that businesses should be allowed to reopen until the virus is contained. More than half (56%) opposed the idea. Some regional differences are still playing out – with the Northeast seeing a significant decline in cases, Americans living there are more open to starting up economic activity again relative to Americans living in the rest of the country. 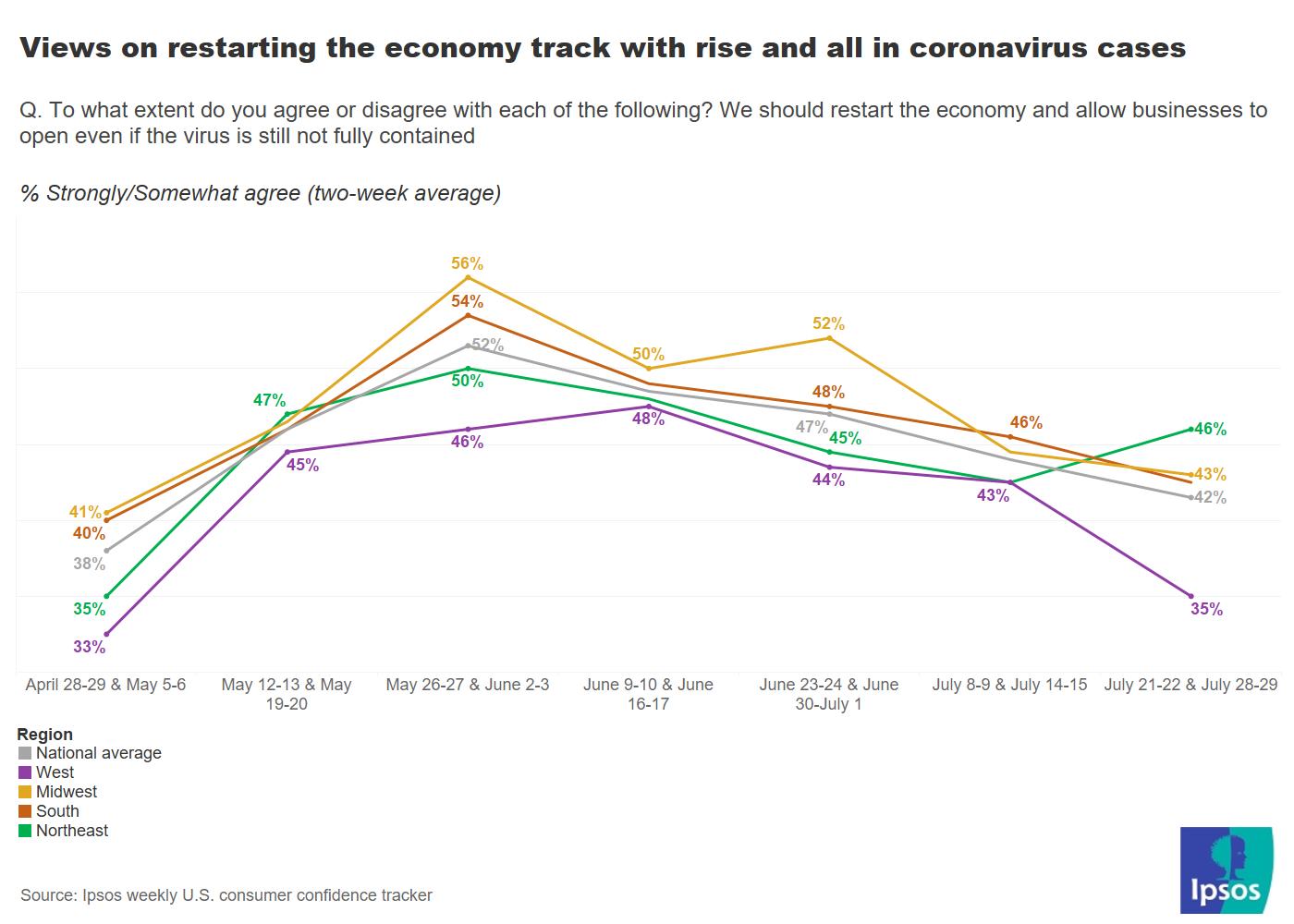 The consequences of more laissez faire policy decisions and reopening schedules are severe, from both a public health and public relations standpoint. From the public health angle, the United States has been hit with a cumulative 4.8 million reported coronavirus cases, though Centers for Disease Control officials caution that official statistics are likely an undercount. At the same time, trust in the institutions that should be leading the nation through the crisis has fallen precipitously, particularly in states (and the federal government) who do not appear to be putting public health first. State and federal leaders will now have to grapple with those frayed bonds as they seek to build a national and local approach to confronting a virus that has claimed the lives of at least 159,000 Americans.