Hopes that the coronavirus would dissipate in warmer weather appear to have been misplaced, as the number of newly reported coronavirus cases continues to rise in at least 20 states nationwide. All signs suggest that even partial state reopenings are contributing to the ongoing community spread of the virus.

This news, coupled with three weeks of sustained mass protesting, have reinstilled fears about the virus. Americans are beginning to see everyday activities, like going back to work or seeing friends and family, as more threatening again, according to the most recent Axios-Ipsos Coronavirus Index data.

Indeed, many Americans are beginning to worry about the possibility of a second wave of the virus. Though the rise in new cases has been uneven across states, between 76% and 83% of all Americans reporting some level of concern whether their state is seeing an increase, decrease, or steady state in newly reported cases.

The most notable levels of concern are among citizens of Arizona, Texas and Florida, according to analysis of the Axios-Ipsos Coronavirus Index. All three states have seen a significant increase in newly reported cases and hospitalizations over the past several days. On Tuesday, Florida reported 2,783 new cases, Texas 2,622, and Arizona 2,392, according to The New York Times. 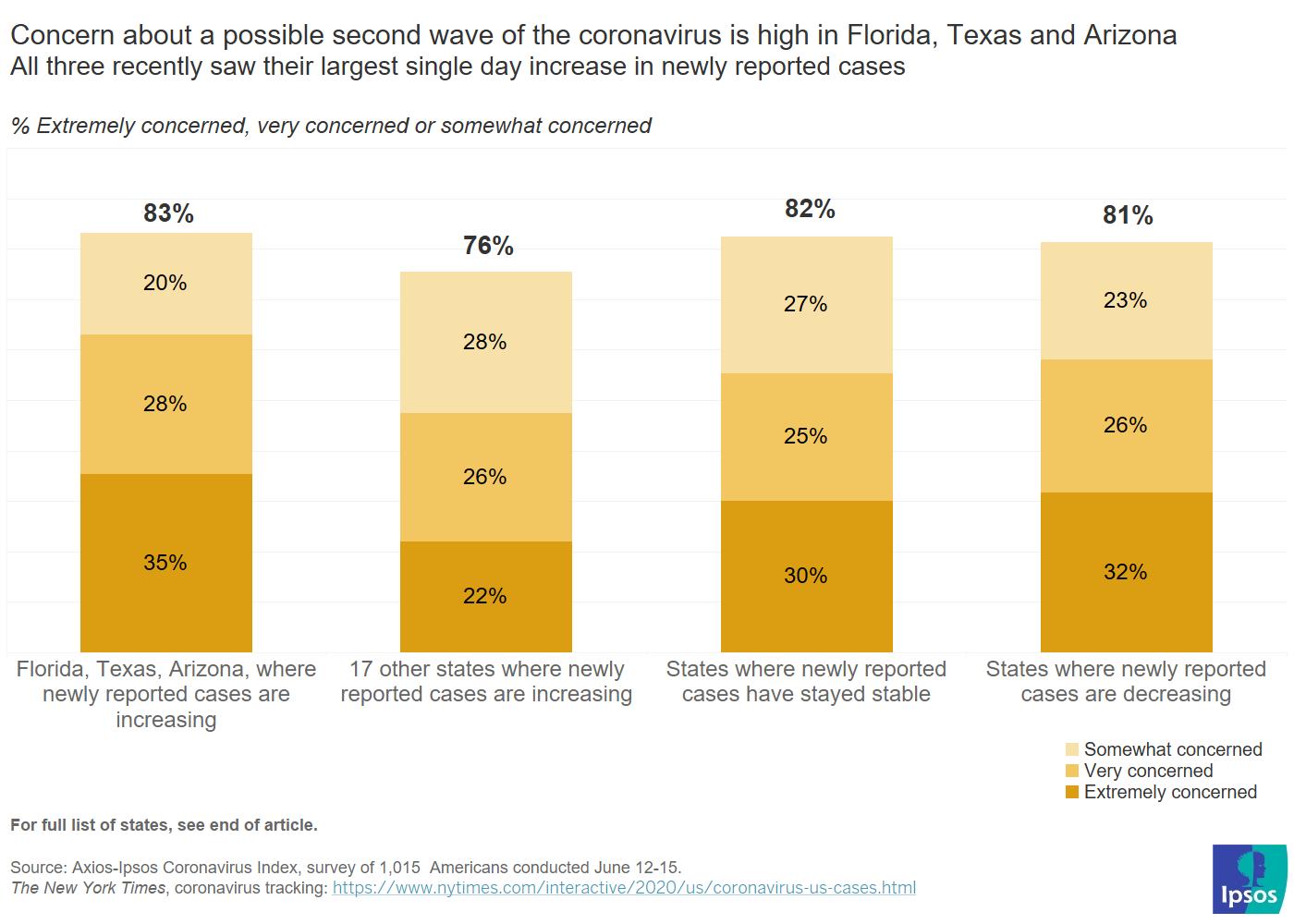 The recent spike in confirmed cases might have a simple explanation: more tests are being conducted now than were earlier on in the pandemic, as the nation struggled to develop enough tests to adequately monitor the spread of the virus. But some epidemiologists demur, saying that the rate of increase suggests that it is attributable to people not following social distancing guidelines as state relax restrictions.

Still, there is good news in that the number of deaths and new cases are slowing overall. New York, once the epicenter of the virus with nearly 390,000 confirmed cases and over 30,600 deaths, is seeing a steady decline in both.

Nor is a full-on second wave of the virus a foregone conclusion, according to experts like Dr. Anthony Fauci. "It is not inevitable that you will have a so-called 'second wave' in the fall or even a massive increase if you approach it in the proper way," the nation’s top infectious disease expert told CNN last week. Provided that people follow social distancing guidelines and avoid close gatherings in places like bars and restaurants, the nation should be able to stave off the worst.

But, as states move to reopen, it’s an open question whether Americans will keep on observing social distancing guidelines, such as wearing masks, washing hands and avoiding gatherings.

For now, it’s clear that even though they might be worried about the virus coming back, many Americans are social distancing less and less. Cell phone location data from the Ipsos Biosurveillance Atlas shows a big increase in Americans moving around again from Memorial Day to mid-June, particularly in the Sun Belt states, many of which are now seeing a spike in new cases. The temptation to enjoy summer weather – or the need to get back to work – might be proving to be too much. Indeed, the twenty states where cases are on the rise report being more willing to take risks to return to their pre-coronavirus lives.

If there were to be a second wave of the virus, most Americans would be willing to start social distancing again, according to the Axios-Ipsos Coronavirus Index, though there is not total synchronicity across the political spectrum on this question. Democrats are still more risk averse than their Republican counterparts and more likely to say that they would social distance or self-quarantine in the event of a second wave.

As cases rise, not all governors are willing to reintroduce social distancing restrictions. In states like Florida, Georgia, and Texas, governors are focusing on getting the economy up and running again over slowing the spread of the virus. Georgia is lifting limitations on how many people can sit together in a restaurant or bar, and Florida has lifted restrictions on youth sports and summer camps.

At least for now, in some states, it will be up to the individual to make the final call what is safe to do and what is not. 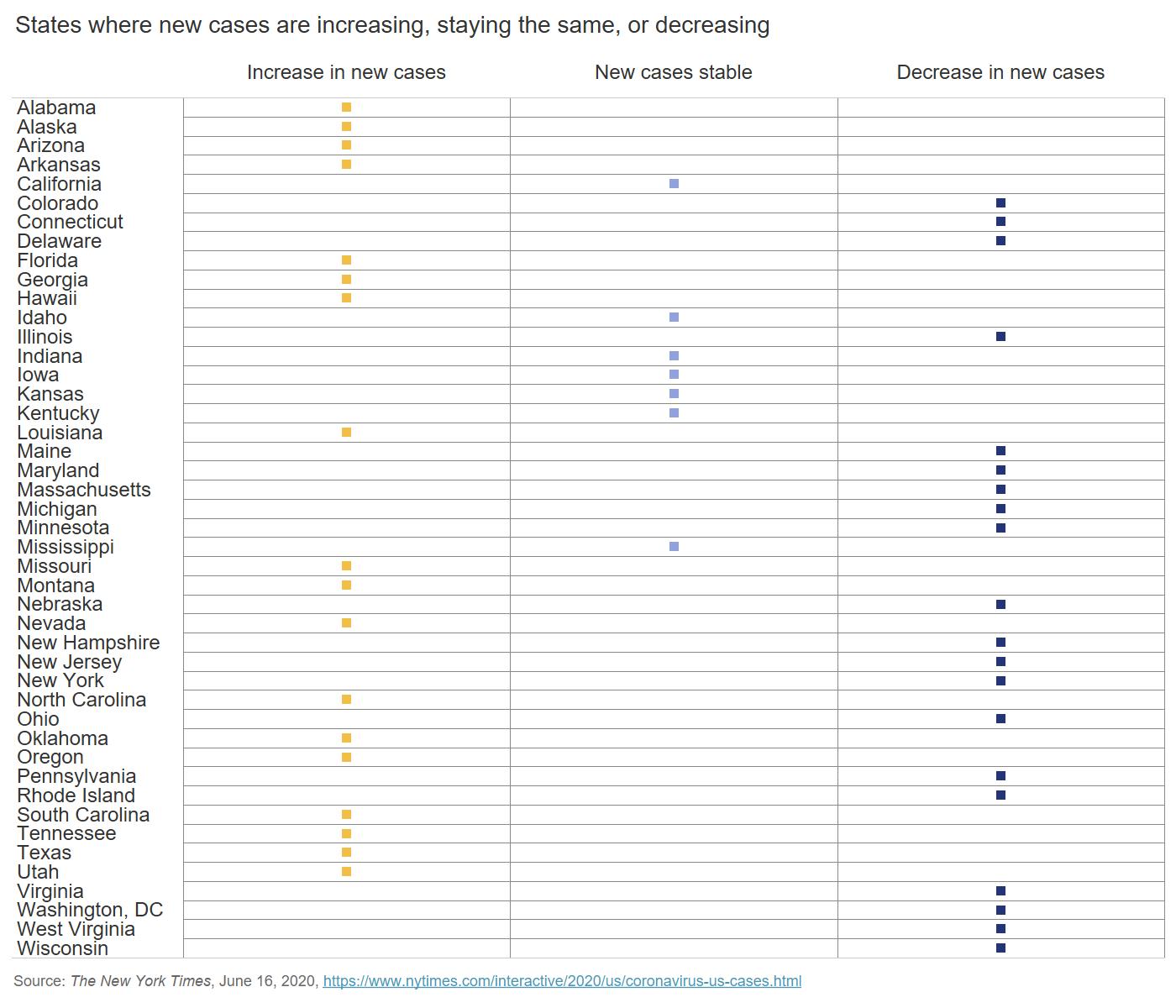