Looking at the history of perception tracking in society, Ipsos has uncovered recent improvements in the overall perceptions of women and the role of women in South Africa.

If we look at the opinions held in May 2015 as opposed to May 2017 it seems as if the constitutional principle of equality is making some inroads:

These beliefs are held by both men and women, however, in all cases the proportion of women saying that they “strongly agree” or “agree” with these notions are lower than the proportion of men who hold the same opinions.

“These views are undoubtedly the result of many years of living in an unequal society” says Mari Harris, Head of Ipsos Public Affairs and Political Analyst. “Our paternalistic society and ideas embedded by culture and custom lead to the view that women are somehow less worthy than men. These beliefs and others perpetuate social, economic and political inequality between the sexes. It is encouraging to see some improvement in these perceptions at last, as the results from May 2017 indicate a small shift in the minds of South Africans towards a more progressive outlook about gender equality and more specifically about women’s place in society.”

In the same survey respondents are asked about the efficiency of government efforts in the fight for gender equality. The government of South Africa plays a key role in addressing gender equality and the formulation and execution of policies to prevent violence against women and children.

However, the perceived success of the government’s efforts in this regard are viewed rather dimly[1]: 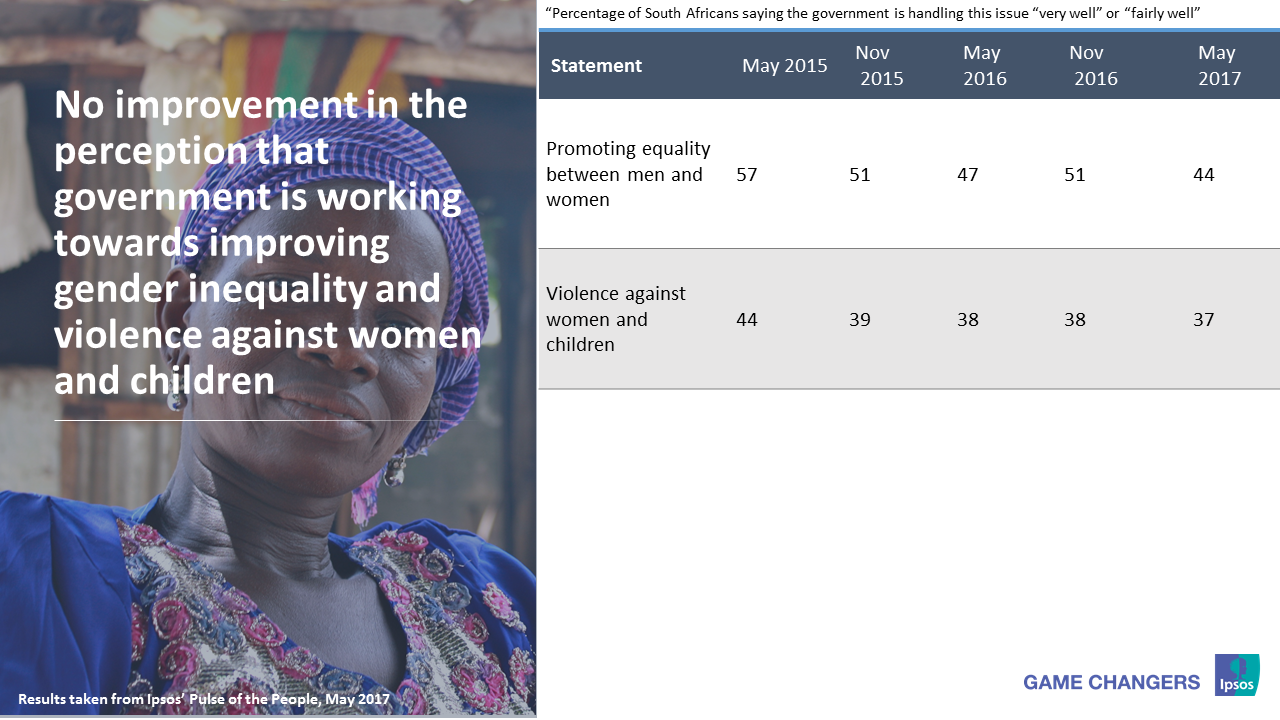 [1] Public reaction after the assault allegations against deputy minister of Higher Education Mduduzi Manana also made this view about government’s role very clear.

The Khayabus study was conducted from 21 April to 22 May 2017.  A total of 3,598 South Africans, 15 years and older, were interviewed. They were randomly selected and interviewed face-to-face in their homes and home languages. Interviews were conducted all over the country, from metropolitan areas to deep rural areas. This methodology ensured that the results are representative of the views of the universe and that findings can be weighted and projected to the universe – i.e. South Africans 15 years and older.

All sample surveys are subject to a margin of error, determined by sample size, sampling methodology and response rate. The sample error for this sample at a 95% confidence level is a maximum of 1.63%.