This global study finds that, overall, people across all countries are more likely to think things in their country are off on the wrong track (63%), than headed in the right direction (37%.) Most pessimistic are the French, 88% of whom think things are going wrong, with only 12% feeling that things are going well. Closely following France are Mexico, Brazil, Italy, and Spain – countries which are seeing significant challenges regarding crime (Mexico), corruption (Brazil), and economic woes (Italy and Spain). The most optimistic are countries are China, where 90% say things are headed in the right direction, Saudi Arabia (71%), and India (67%). 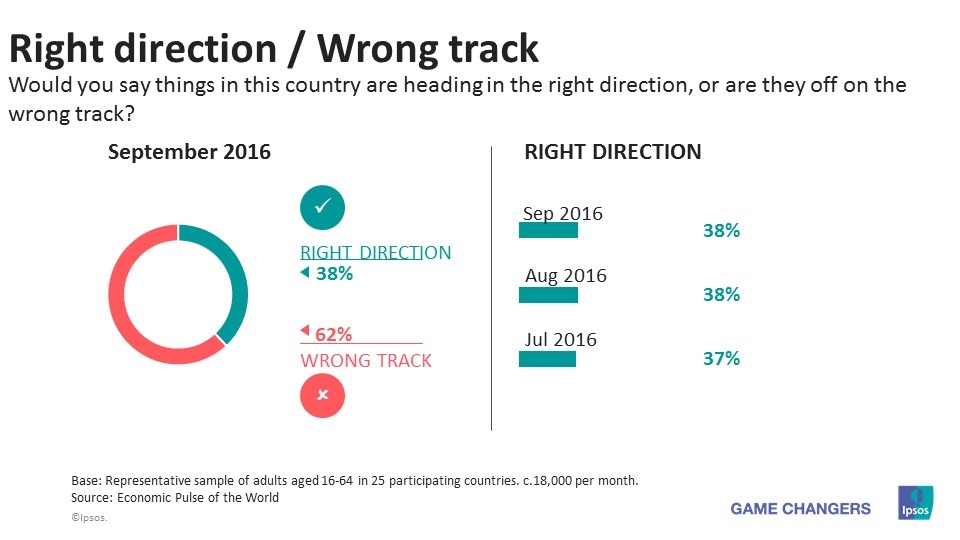 Worries of the world

When it comes to what issues most worry people around the world, the single biggest issue across all countries is unemployment, which is mentioned by 38% globally. This is a modest (2 point) increase compared to last month, but over the longer term, concern about unemployment has been decreasing since 2010 when more than half across all countries said this worried them. 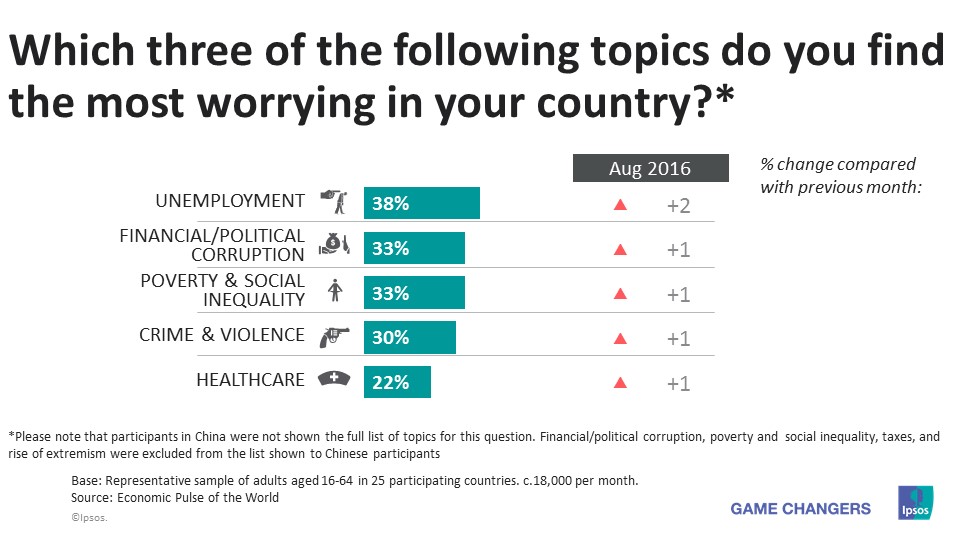 Concern about terrorism is highest in Turkey (76%), and this is also the highest level of worry about any issue across all of the countries surveyed. Countries with recent or ongoing exposure to incidents of terror are among the most worried about terrorism: Israel (45%), France (55%) and Belgium (38%).

Healthcare, the fifth most frequently mentioned issue globally, is a significant concern in Hungary (where 59% mention it) and Brazil (50%). Healthcare is the second most frequently cited issue among Britons (34%) and has seen an increase of 7% month on month, possibly fuelled by an ongoing industrial dispute between junior doctors and the government.

Crime and violence is a big and growing concern in Mexico (60% say this is a worry up 19% month on month) and Argentina (now 56%, up 11%). In Peru, crime and violence is the primary worry, with 74% saying this worries them - the highest level of concern about the issue among any country in the study.

China is most worried about climate change (21%) and threats against the environment (38%) out of all countries.