Ipsos MORI’s latest Political Pulse, taken last weekend (November 19-23) shows public favourability towards Boris Johnson at the lowest level since the Ipsos MORI Political Pulse began in 2019. 24% of the public are favourable towards the Prime Minister (-2 points from October) and 51% are unfavourable (+2 points). Whilst movement from October is small, these numbers reflect a trend over the summer and autumn months, with Johnson’s net favourability score of -27 the lowest we have recorded in this polling series – which began just before the 2019 General Election. 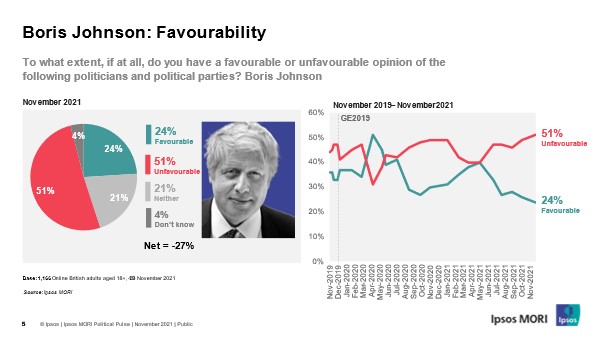 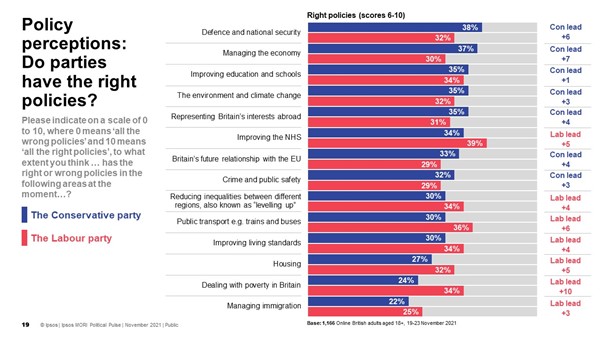 Elsewhere in the poll we asked the public to rate the policies of the Conservatives and Labour across 14 areas where a score of 10 would indicate that the party had ‘all the right policies’ and a score of 0 meant they had ‘all the wrong policies’. When we look at the proportion of Britons giving each party a score of 6 or above – meaning they have the right policies – we can see Labour leads the Conservatives by 5 points or more on the NHS (+5), public transport (+6), housing (+5) and fighting poverty (+10). The Conservative lead Labour by 5 points or more on managing the economy (+7) and defence / national security (+6). 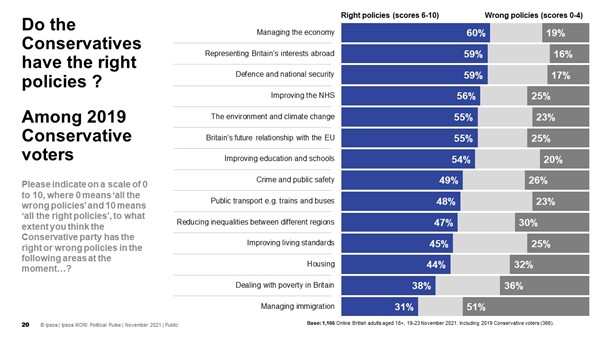 Keiran Pedley from Ipsos MORI said of the findings:

Boris Johnson is enduring a difficult winter as his favourability scores continue to fall. When we look at the policy areas polled, it is striking how unhappy 2019 Conservatives are with the party on how they are managing immigration. Our research suggests this could be an area of vulnerability for the party. However, the threat to the Conservatives is unlikely to come from Labour. Across the 14 issues polled, Conservative voters give Labour the worst scores of all on that very subject.

Technical note
Ipsos MORI interviewed a representative sample of 1,116 Britons aged 18+. Interviews were conducted online from 19 -23 November 2021. Data are weighted to match the profile of the population. All polls are subject to a wide range of potential sources of error.