Ipsos MORI’s latest Sustainable Business Monitor survey shows the dangers of companies not behaving responsibly, nearly half of the British public (45%) tell us that they have reconsidered using a products or services from a company that has avoided paying tax in this country.  There is further evidence of consumers having had enough and taking action that could affect the bottom line. The boycotting of companies or products on the grounds of poor corporate social responsibility (CSR) has increased since 2013, with a 7 point increase year on year in the proportion who claim to have boycotted a product in the last 12 months for this reason (up to nearly a quarter 23%). 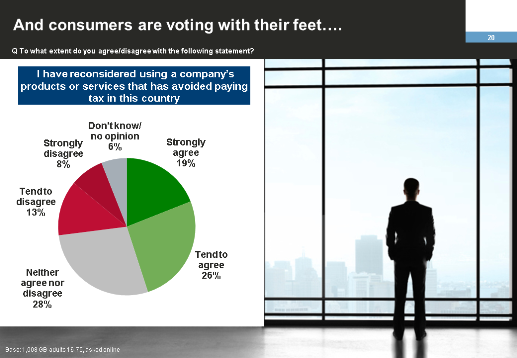 Action by the public is set within the context of a high degree of cynicism and distrust in British business.  Seven in ten believe that industry and commerce has lost the trust of the general public.  A similar percentage (68%) question the motivations of companies’ corporate responsibility initiatives, agreeing that ‘large companies only invest in the environment and community initiatives to make themselves look better’. 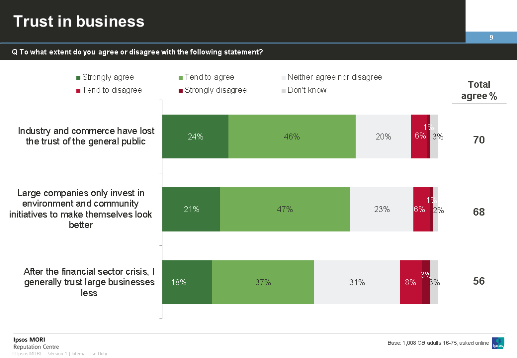 Corporate tax avoidance and executive pay are top of mind for the public, clearly emerging as the top two themes that they would like to see companies address. 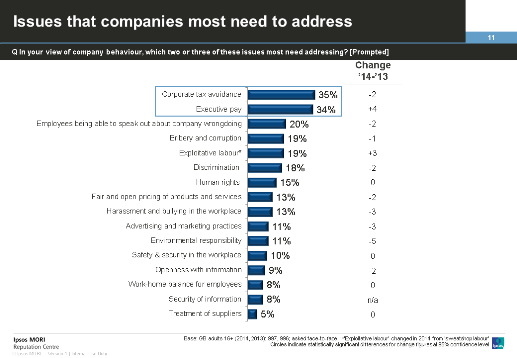 Authenticity is paramount, three quarters (76%) say it is not enough for a company to simply say that it is responsible, they need to prove it.

“The country may now be recovering from the economic crisis, but the public hasn’t recovered emotionally.  The financial sector has cast a long shadow over British business as a whole and perceived corporate misbehaviour around tax even by a small minority further entrenches cynicism around corporate responsibility. Companies are going to have to work hard to maintain their reputations and re-build public confidence in their motivations.”

Fieldwork was conducted in two parts: