Ipsos MORI conducted an online survey of members of the Royal Economic Society and the Society of Business Economists on behalf of the Observer. The survey asked economists for their professional opinions on the likely effect of Britain leaving the EU and the single market on a variety of economic indicators, including real GDP and unemployment.

Of the 639 economists who responded: 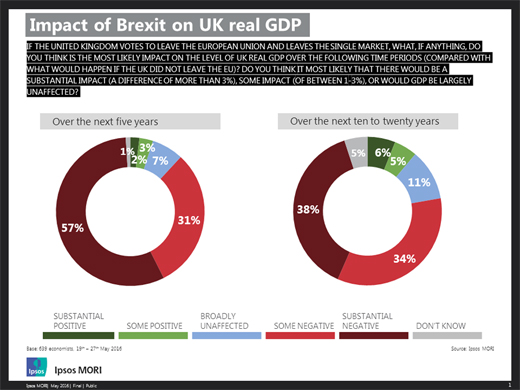 “We know that the economy along with immigration is one of the two key issues driving voters’ decisions in the referendum. At the same time, though, the public is conflicted over the potential long-term economic impact of Brexit – while half do think it would be negative for Britain’s economy in the short term, in the long term the argument is yet to be won, and when it comes to their own personal standard of living, just under half think it would make no difference. At the same time, people are looking for information to help them make up their minds, and groups such as academics, along with friends and family and small businesses, are among the most trusted – especially for remain supporters.”

639 respondents completed the online survey between 19th to 27th May 2016. The survey was undertaken online with invitations sent out to non-student members of the Royal Economic Society (RES) and the Society of Business Economists (SBE). Reported figures are based on unweighted data and so should only be taken as representative of those who responded. Overall 3,818 invitations were sent out, with a response rate of approximately 17%. For questions where respondents were asked to provide reasons for their answers, respondents were presented with a pre-defined prompt list.