The Carers Action Plan 2018-2020 highlights the complex challenges that exist for carers in England, related to both their experience of health and social care services, and their health and wellbeing [1]. The GP Patient Survey (GPPS) provides invaluable insight into the health of carers and their experience of general practice. Overall, of those who answered the survey, 16.7% said they had a caring responsibility, providing support to someone due to long-term ill health, disability or problems related to old age. These carers generally reported a worse experience than non-carers. While young adults (aged 16 to 24) were less likely to report caring responsibilities (7.9%), the effect of caring responsibilities on young people’s experiences was markedly greater than for older groups. The following data focuses on this inequality of experience.

Carers often have extensive contact with the health and social care system, so understanding their general practice experience is vital [1]. GPPS data shows young carers were less likely to report a good overall experience of their GP practice (70.6% compared with 77.9% of young non-carers, as shown in Figure 1.1). Young carers were also less likely to have a good experience of making an appointment (55.2% compared with 64.3% of young non-carers). 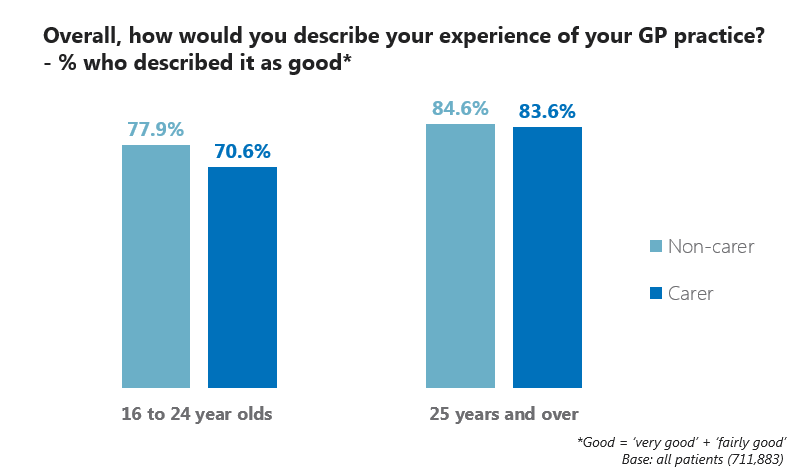 In addition, young carers reported inequalities in other areas of their experience of general practice services compared with others their age who did not have caring responsibilities, they were:

The Carers Call for Evidence also highlighted inequalities in health for young carers, who can suffer with poorer health and wellbeing, often missing out on education and training opportunities as a result [1]. The GPPS supports this, showing over four in ten (43.0%) young carers reported having a long-term condition (or conditions) compared with three in ten (29.1%) young non-carers. In addition, young carers were less likely to feel supported by local services in managing their conditions (64.7% compared with 74.8% of young non-carers). This difference between carers and non-carers was markedly greater for young patients (10.1 percentage points), compared with the 1.5 percentage point difference between older carers and older non-carers (as shown in Figure 1.2). This suggests young carers face barriers in accessing the right support, and local services have more to do in reaching this younger cohort. 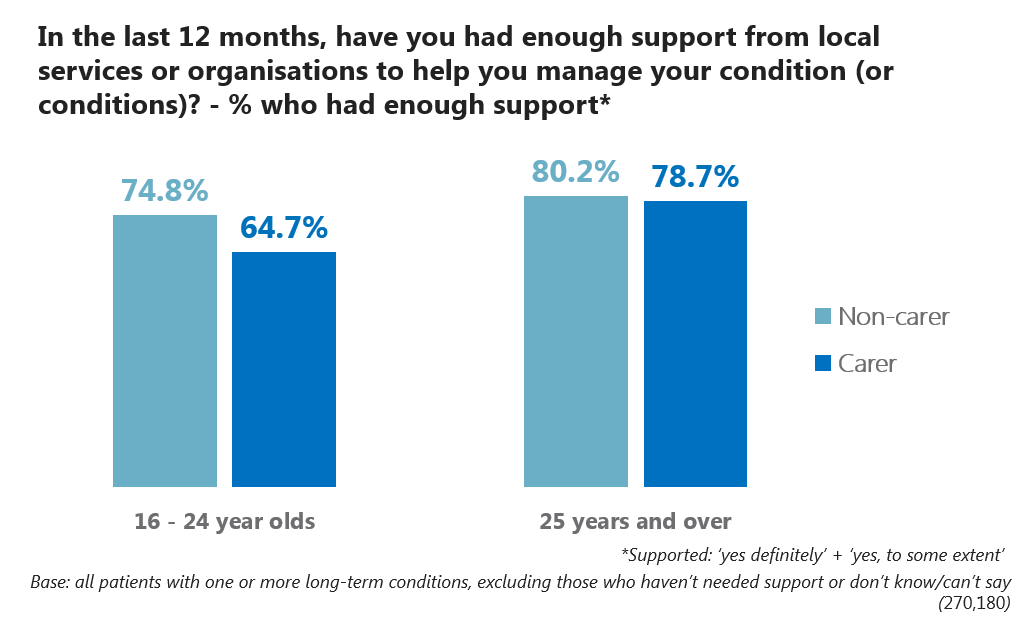 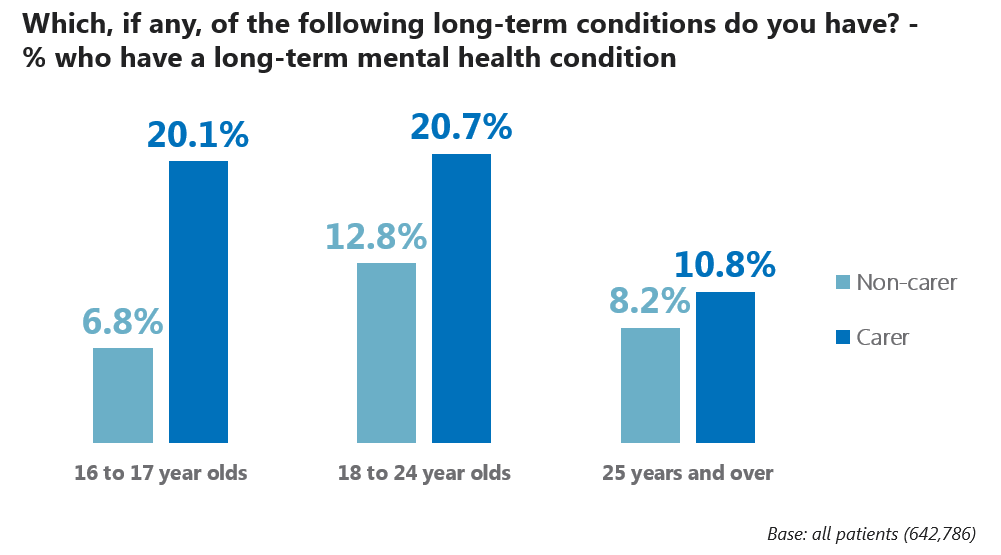 GPPS data shows that carers generally reported poorer health and experiences of their general practice services than patients who do not have caring responsibilities, with some of the greater differences seen in the youngest patients. These challenges are recognised in the NHS Long Term Plan, which aims to improve support for young carers to address their individual health needs. The Government states that they are committed to ensuring young carers are not left behind [1], and this will be vital in supporting some of the estimated 18 million people in England who will take on an unpaid caring role over the next ten years [3].

The GPPS provides a rich source of information on patient experiences of their GP practice. You can access and analyse the results by going to https://www.gp-patient.co.uk/ or email the team. The 2019 GPPS data is due to be published on 11th July, and will allow analysis of any changes in the experience of carers (and other groups).

Ipsos MORI administers the GPPS on behalf of NHS England. Approximately 2.2 million questionnaires were sent out nationally, and 758,165 were returned completed between January and March 2018. This represents a response rate of 34%. Data is weighted to match the profile of the population. The data reported on this page is weighted. Read further technical information about how the survey works here.