In an online Ipsos MORI survey, half (49%) of British workers say they are finding it more difficult to work now than they did before the outbreak of COVID-19. A further 46% say their ability to work has stayed the same. With the number of people working from home increasing from just 15% to 36% in the past week, this may be encouraging for the months ahead.

Younger workers are more likely to be struggling to work in the current situation. Three in five (58%) of those currently in work aged between 18-34 say they are finding it harder since the coronavirus outbreak, compared to nearer two in five 35-54-year-olds (45%). 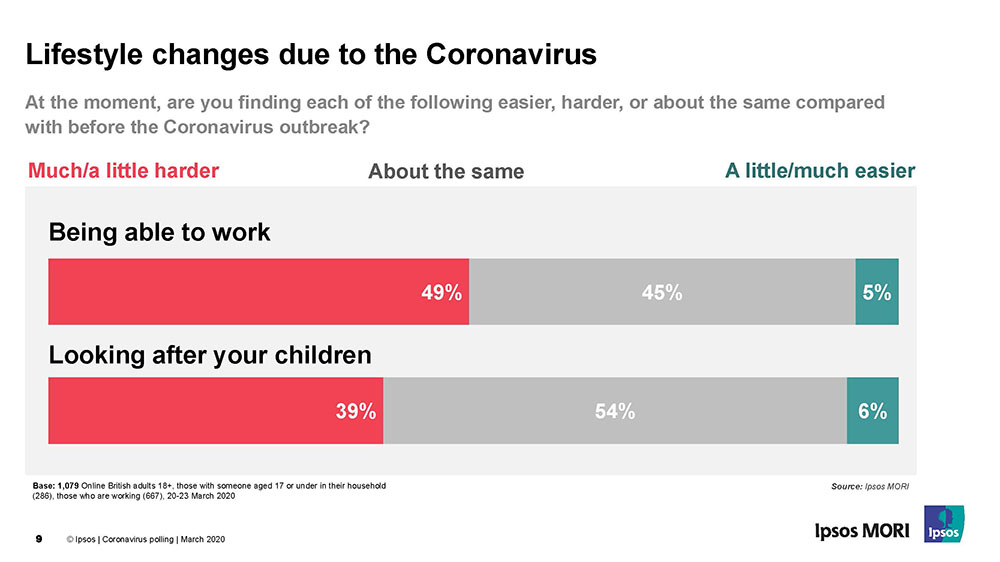 In the survey, conducted on the cusp of school closures and full “lockdown”, 39% of British parents (with a child aged 17 or under living in their household) say that looking after their children has become more difficult since the outbreak of COVID-19, and that’s before many of them had embarked on home schooling this week.

Younger parents and guardians are significantly more likely to be finding childcare more difficult as a result of coronavirus. Over half (51%) of parents aged between 18 and 34 say childcare is more difficult now while this jumps down to a third (32%) of those aged 35-54.

Half of British workers have been finding it harder to do their job in recent weeks because of the coronavirus outbreak.  This could be for a host of reasons, such as the logistics of working from home, having to find safe ways to continue a job, the economic impact or purely the anxiety of the crisis impacting people’s ability to do their job.
What I am pretty certain of is that this figure will undoubtedly go up once those with children start testing their skills as teachers, nannies, nursery workers and employees this week.