Ipsos MORI’s latest Political Pulse survey reveals around half (49%) of Britons think the country is heading in the wrong direction (+5 since September) - the highest proportion since the start of the year. Only one in four (24%) think the country is on the right track (-5) which has near halved from as recently as May (when it was 47%).

Meanwhile, half (50%) now think the UK’s decision to leave the European Union is having a negative impact on the country (+7 since September). One in four (25%) say it has had a positive impact (-5), and 18% say no difference (-2). Leave voters are more likely to believe it has made a positive impact (45%) but a notable one in four (24%) think it has been negative.

Amid this pessimism, Boris Johnson has experienced a slight dip in his ratings following Conservative party conference. Nearing half (49%) say they have an unfavourable opinion of the Prime Minister (+3 since September). One in four (26%) are favourable towards him (-2).

Some forty-five percent say that since Boris Johnson has become Prime Minister, he has changed the country for the worse, whilst fewer than a quarter in each case think he has either made no difference (24%) or changed the country for the better (22%). Optimism is low that things will change, with similar proportions believing he will make the country worse in the future (43%), make no difference (23%) or make it better (24%). 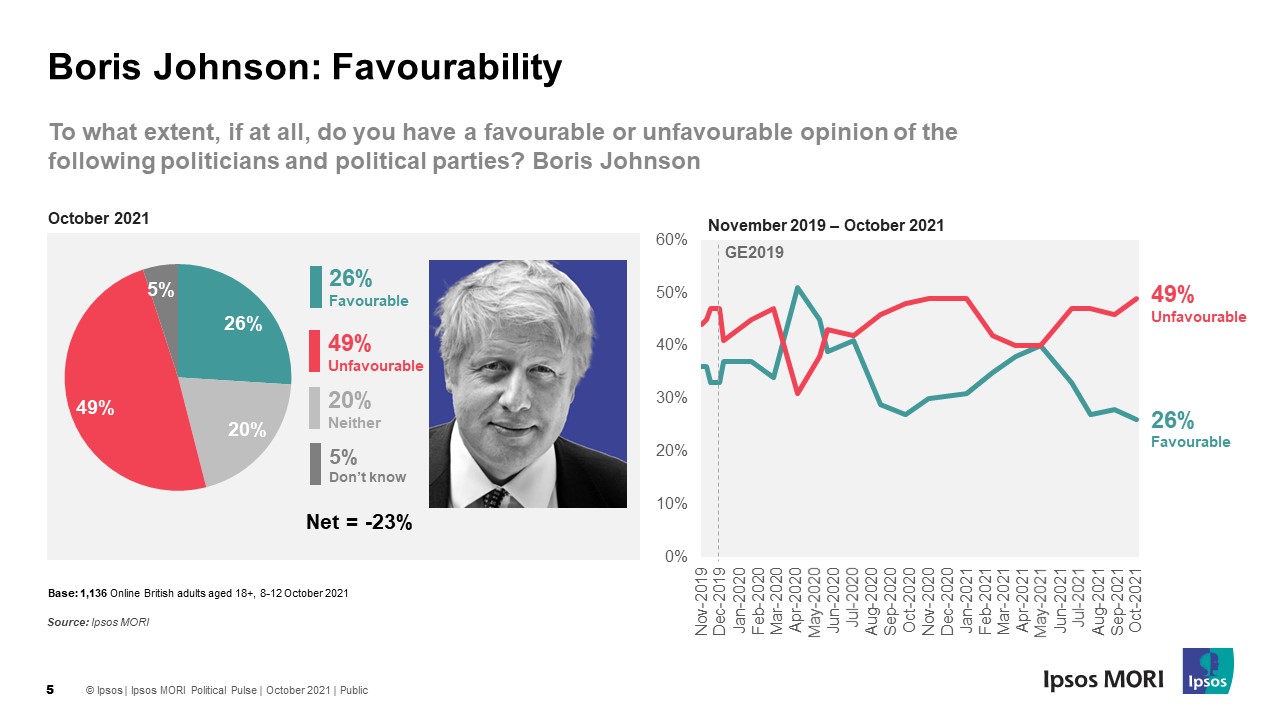 Meanwhile, Keir Starmer’s ratings are largely unchanged following Labour’s conference. Two in five (42%) have an unfavourable opinion of Mr Starmer (-2 from September). Only one in five (19%) are favourable towards him (-1).

Nearing half (46%) believe Mr Starmer has made no difference to the Labour party since becoming leader (-1 since May 2021), whereas nearer one in five say he has either made it better (19%, -1) or worse (19%, unchanged). Opinion is only slightly more optimistic that he will improve things for the Labour party in the future (24%, +2 since May) as slightly fewer think he will not make a difference (38%, -5), but the same proportion think he will make things worse (19%, +1). 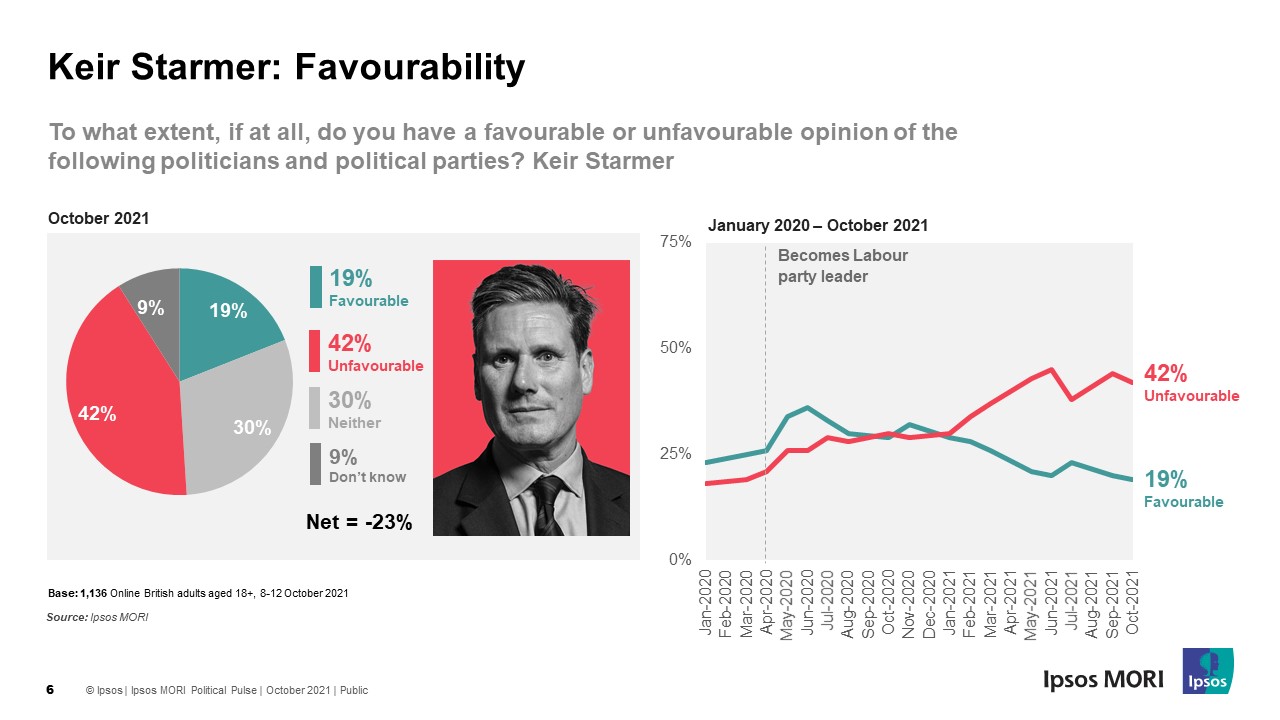 The picture is similar for the leaders’ respective parties. Nearing half (48%) have an unfavourable opinion towards the Conservatives (+5 from September), compared to one in four (25%) who are favourable (-3). This means their net favourability has dropped 8-points since last month (now -23). Meanwhile, two in five (43%) are negative towards the Labour party (-1 from September), whilst fewer than a quarter (23%) are positive (-2).

Elsewhere in the poll, the public are split on the Chancellor Rishi Sunak with three in ten (31%) saying they are favourable towards him (-3 since September) and the same number (31%) unfavourable (+1). This is the first time Mr Sunak’s net favourability (0) has not been in positive territory since this series began asking about him in May 2020.

The public are increasingly concerned about the direction of the country with twice as many thinking things are heading in the wrong direction rather than the right one. They also appear to hold a pretty dim view of our political leaders, with favourability towards Johnson and the Conservatives falling and weak favourability towards Starmer and Labour too.

Ipsos MORI interviewed a representative sample of 1,136 Britons aged 18+. Interviews were conducted online from 8-12 October 2021. Data are weighted to match the profile of the population. All polls are subject to a wide range of potential sources of error.