The April 2020 Ipsos MORI Issues Index records 85% of the public saying the coronavirus is one of the most important issues facing the country, on a par with the highest score for any issue since the series began in September 1974. During periods of the 1980s, concern about unemployment was also as high, with a peak of 87% in 1982.

Compared with February, concern about pandemic diseases has increased by eighty percentage points. This is the biggest jump in concern in the 46-year history of the Issues Index, and is the highest score recorded for this code since it began in 2006.

It should be noted that because of the impact of the coronavirus, this month’s Issues Index is the first ever to be carried out by telephone, rather than face-to-face. This means some caution should be taken when making exact comparisons with previous months. Having said that, the questions were asked exactly the same way; the answers are spontaneous responses, and participants are not prompted with any answers.

The level of public concern about the coronavirus leaves less public attention for previously front-running issues:

The proportion who are worried about the economy has doubled, from 17% to 35%. This makes it the second-biggest issue facing the country this month. 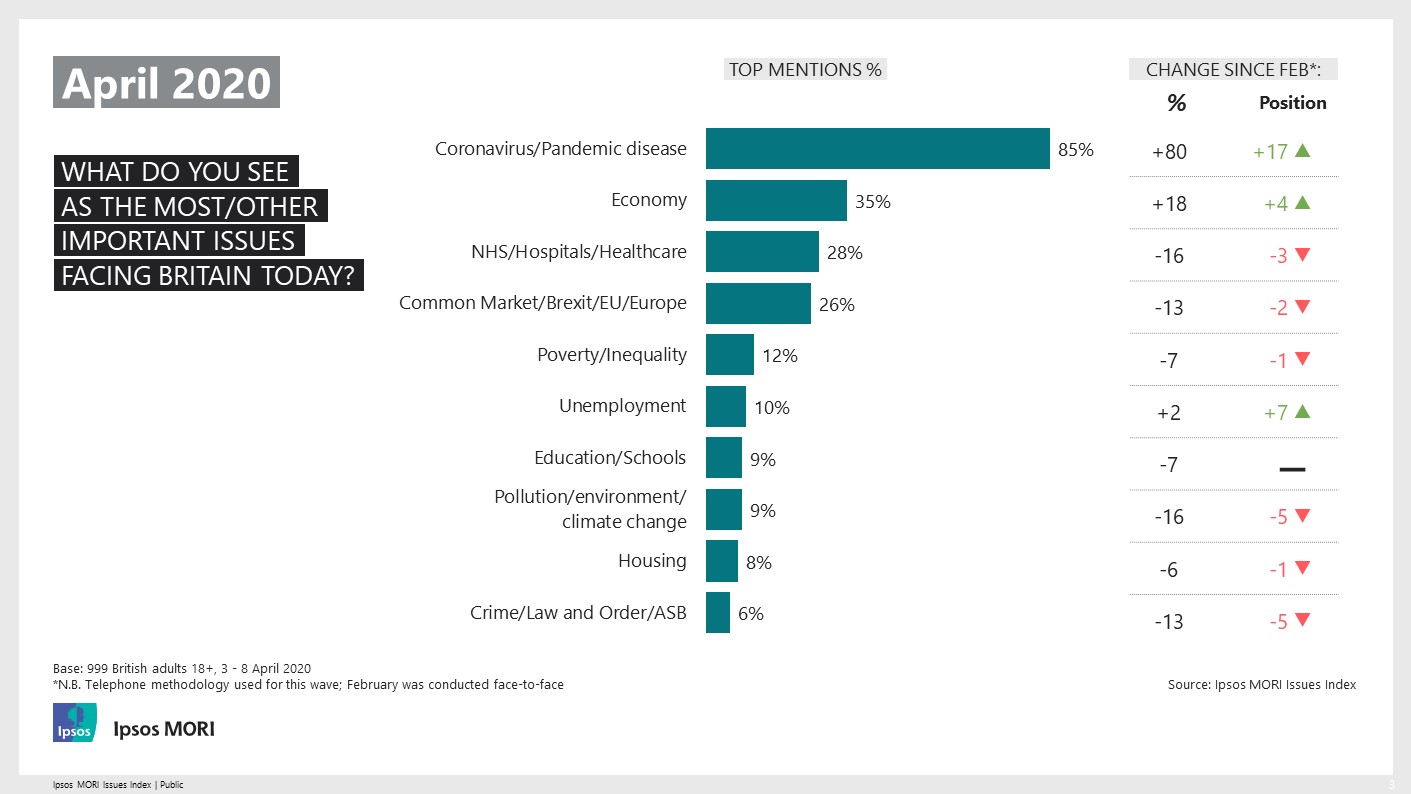 The coronavirus is by far the biggest issue, across all subgroups. Outside this, the economy is second, especially in the South East and among Conservative supporters – perhaps reflecting concern about the longer-term impacts of the virus.

However, those aged 18-34 and Labour party supporters stand out as being more likely to put the NHS above the economy, while those in social grade C1 rate both issues evenly.

“It should come as no surprise to see coronavirus dominating public concern to a level rarely seen in the half century covered by our long-running Issues Index poll. In that time, we have only recorded a higher score four times.

Many other issues which had been rising up the public’s priorities, including climate change, crime – and even Brexit – seem to be crowded out by this focus since the last Issues Index in February.

Specific mentions of the health service have also fallen sharply since February, although given widespread conversation about potential shortages in equipment and the hard work of NHS staff, it is likely that there is an overlap between concern about the pandemic and its impact on the NHS.

Instead, the public appear to be increasingly worried about the economy, suggesting that in the teeth of this crisis the public are starting to think about the shape Britain will be in when it emerges from lockdown”

This month’s Issues Index is the first in the poll’s 46-year history to be conducted over the phone; lockdown conditions mean face-to-face fieldwork is currently not an option for public opinion polling. Mode effects should be kept in mind when comparing the new data points with previous months.

Ipsos MORI's Issues Index is conducted monthly and provides an overview of the key issues concerning the country. Ipsos MORI interviewed a representative sample of 999 adults aged 18+ across Great Britain. The answers are spontaneous responses, and participants are not prompted with any answers.

Ipsos MORI's telephone omnibus was used for this survey. Interviews were conducted between 3 and 8 April 2020 across Great Britain. Data are weighted to match the profile of the population.