The Health Foundation has today released new polling data with Ipsos MORI looking at the public’s attitudes towards the Government’s measures to tackle the public health and economic impacts of the Coronavirus pandemic.

In April, the government introduced the £20 a week increase in Universal Credit and Working Tax Credit for families during the pandemic. The survey shows strong support for this increase, with three quarters (74%) supporting the increase during the pandemic and only one in ten (nine percent) opposing this.

However, the increase is currently expected to be reversed in April 2021. The data shows that a majority (59%) of the public support making the £20 increase in Universal Credit permanent beyond April 2021, with one in five (20%) opposing this.

The Health Foundation/Ipsos MORI research also finds that public support for the UK government's response to the pandemic has fallen further since May. Only 39% of the public think the government has handled the pandemic well, a fall of 21 percentage points from 60% in May. However there is a clear divide on this along political lines, with 71% of Conservative voters saying the UK Government has handled the pandemic well, compared with just 15% of Labour voters. 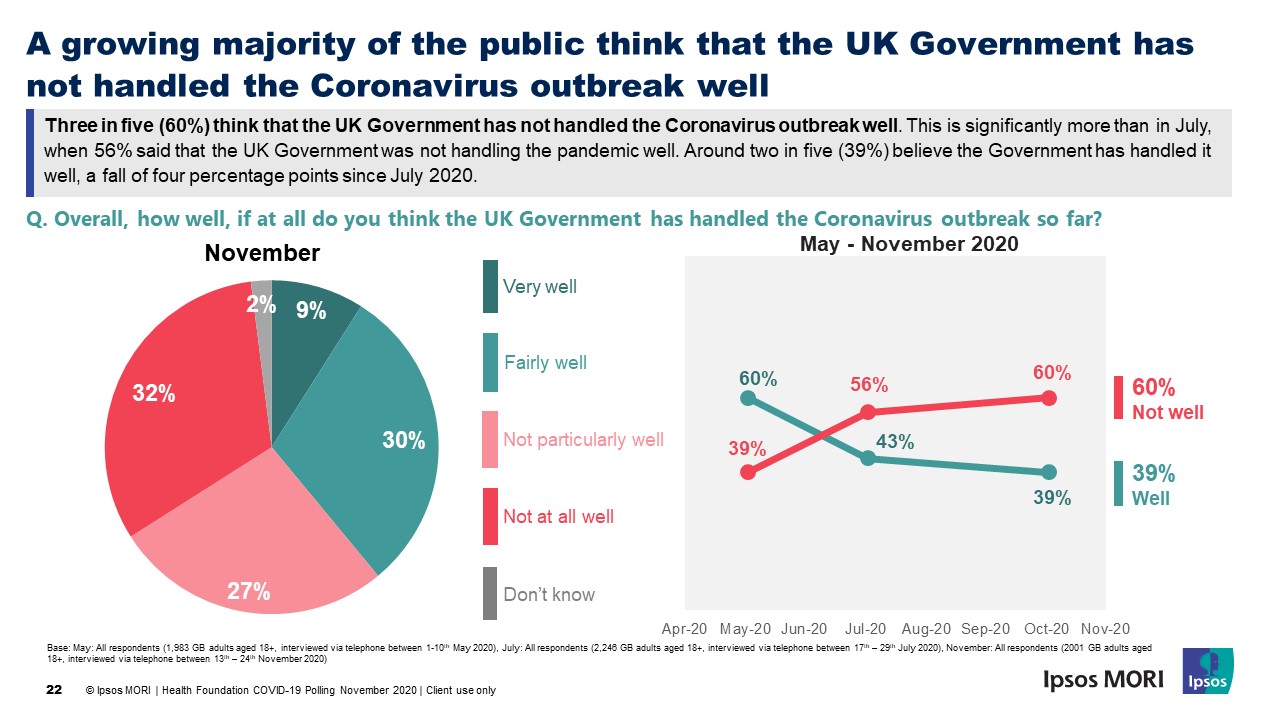 The November survey was conducted by telephone on the Ipsos MORI CATI Omnibus survey, a weekly telephone omnibus survey of a representative sample of people aged 18 and over in Great Britain. Fieldwork took place between 13th November and 24th November 2020. A total of 2,001 people were interviewed. For the main sample, quotas were set on age, gender, ethnicity, Government Office Region and working status.

For the overall November findings, data has been weighted to the known population proportions for age within gender, Government Office Region and working status and social grade

Throughout the report findings will highlight, and make reference to, different sub-groups based on responses to certain questions. When interpreting the survey findings, it is important to remember that the results are based on a sample of the population, not the entire population. Consequently, results are subject to margins of error, and not all differences between sub-groups are statistically significant (i.e. a real difference). Differences between sub-groups which have been reported are all statistically significantly.