In a new global Ipsos survey, more than 4 in 10 (43%) Britons say they are trying to lose weight. Women are significantly more likely to be trying to shed the pounds; half are currently working towards this while 37% of men are trying to do the same.

When looking at methods of weight loss, dieting/reducing food intake and exercising more are most likely to be used (53% and 52% respectively). Half of British adults are eating healthier but not dieting while around a quarter are drinking fewer sugary drinks (27%) and alcohol (25%). Men are significantly more likely to cut sugary drinks and alcohol out of their diets, roughly a third use this as a method (35% sugary drinks and 33% alcohol), only around 2 in 10 women would do the same (22% and 19% respectively). 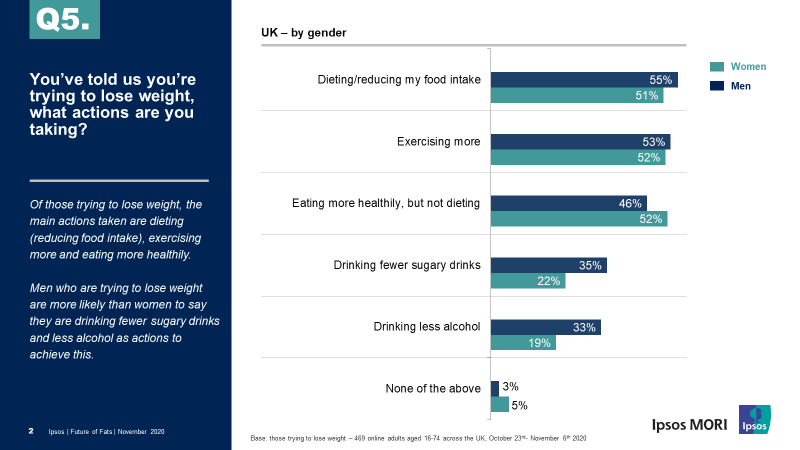 One in five (20%) have reduced the amount of alcohol they consume while they try to lose weight, but this is seen as more important among those not trying to lose weight (24%). Only 7% say they are avoiding meat while attempting to shed the pounds.

Britons appear well informed when it comes to understanding the difference in the type of fat they should be avoiding. While over a quarter of those trying to lose weight (27%) would avoid saturated fats, only 2% would avoid unsaturated fats.

Among those trying to lose weight, cheaper healthy foods are seen as the best way companies and the government could help people with weight loss (52%). Other solutions include healthier ingredients in processed foods (17%), more public exercise facilities (14%), more green public spaces for exercising (14%) and easier access to healthy foods (9%).

There is evidence from this survey that a large proportion of the British population recognise the need to manage their weight and we do see that people are better informed about the factors in their diet that they need to focus on to achieve that goal.  However, much relies on the individual to remain motivated and we know that there are many so factors that can easily erode that motivation.  So, a multi-faceted approach which also involves manufacturers, retailers, education and policy makers is going to be needed to successfully halt and then reverse the obesity crisis.